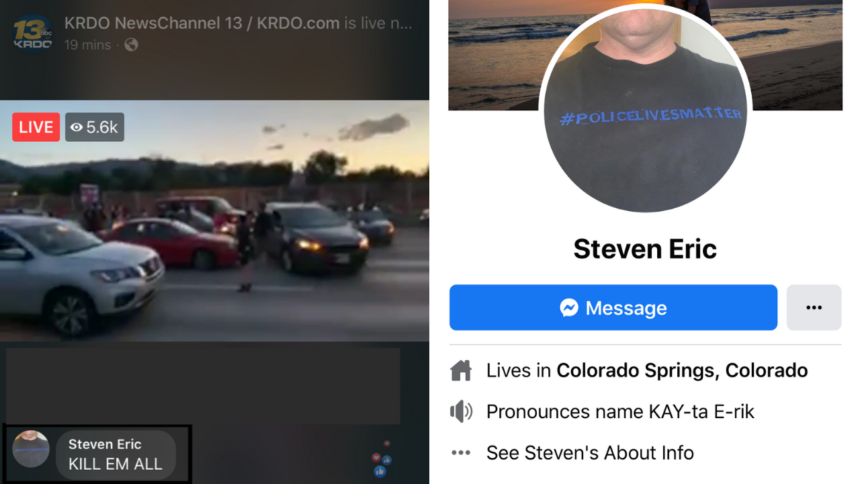 COLORADO SPRINGS, Colo. (KRDO) -- The Colorado Springs Police officer who said "KILL EM ALL" on a KRDO live stream of protesters on Interstate 25 has been identified as Sgt. Keith Wrede, and he'll be disciplined with a suspension and reassignment to a different position in the department.

In the comments section, Wrede wrote "KILL EM ALL" and "KILL THEM ALL" within a five-minute period.

That protest happened on June 30, and we learned on July 6 that an internal affairs investigation was underway into the comments. CSPD told KRDO when the investigation was started that "the alleged comments were inappropriate and unprofessional and do not reflect the values of the Colorado Springs Police Department." Wrede was placed on suspension with pay while the investigation was conducted, according to CSPD.

CSPD Chief Vince Niski said Monday, "We offer our organizational humility and a heartfelt apology to our entire community. Please make no mistake that I do not condone his actions, or attempt to minimize the severity of harm it has done in a time of rebuilding between law enforcement and the community."

CSPD says that Wrede's chain of command "made the decision to issue a discipline of a 40 hour suspension (which results in approximately $2,044 in lost wages), the removal from his specialized unit, and reassignment to a different position within the department."

The account was deleted shortly before our first report was published, but the account had been tagged in at least one photo of Wrede when he earned a Medal of Valor from CSPD last year.

In an interview with a commander about the incident, Wrede admitted that he shouldn't have made the comments, even if they were from a private account.

"This was an off-duty incident at my house, on my computer, under an assumed identity that I thought was pretty private and fairly locked down," Wrede said in an interview with a CSPD commander that was released to the public Monday. "Clearly it was not. It doesn’t matter how private it was anyway. The statement shouldn't have been made. This does not at all reflect in my performance at work. It doesn’t reflect the fact that I've been, you know, nearly 20 years without an incident."

Wrede has been with CSPD for decades, and he even made KRDO headlines back in 2015 when he and a doctor helped a family deliver a baby on the side of I-25.

However, Wrede was also involved in the June 1 arrest of a protester that prompted an investigation by internal affairs. We reported when the protester, Justin Salmons, was held down by multiple CSPD officers and struck several times. Official narratives given by CSPD officers say Salmons ignored commands to get on the ground before a passerby caught video of his arrest.

Officers reported that they found a knife on Salmons, and Wrede said in a police report obtained by ProPublica that he only held Salmons down and didn't strike him or use any type of "less than lethal tool" against him. The status of that investigation isn't clear at this time.

After our report, protests had erupted after Wrede's comments calling for him to be fired from the department. A summary report of the investigation says that Wreade's initial posts "potentially put citizens and officers in danger" because of further protest activities.

In response, Chief Niski said that he is aware of "misconceptions" regarding the investigation.

"We have heard concerns from many community members and are also aware of misinformation or misconceptions regarding our role and response to this investigation. I would like to first start by addressing the demand for termination. These requests were for immediate termination before our investigation was even completed. While I understand frustrations, Sergeant Wrede, just like our community members, are afforded due process whenever any type of investigation takes place," Niski said in a statement.

The internal affairs investigation report was verified by Deputy Chief Pat Rigdon. The report found that Wrede violated policies on police officer conduct and social media usage, but there wasn't a violation of "fair and impartial policing" because the comments were made while Wrede was off duty.

Rigdon wrote in his summary that he believes Wrede should stay with the department because he "still has a lot to bring to the organization and the community in the form of experience, resilience, and even leadership." Rigdon said he believes Wreade is truly remorseful and didn't intend to act on his comments, and it's his hope that the discipline imposed "will modify his behavior and cause him to be more reflective on his actions and the consequences that they have."