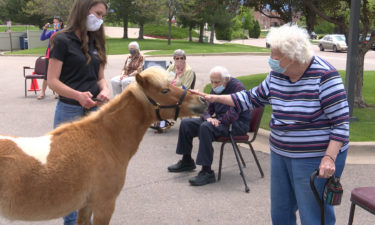 It's not often a ranch opens its gates to the public, but there is one in Southern Colorado that has set out to make that happen.

Duke Phillips has lived on the 87,000 acres of Chico Basin Ranch near Hanover for the past 29 years.

"This ranching has been in my family for generations. I'm fourth-generation but not necessarily on this landscape," he said.

Chico Basin is just one of the many ranches that Ranchlands manages.

That's why their biggest mission is spreading the word on their open-door policy, using it to inspire others with their dedication to land, water, wildlife and habitat.

"Our education program sees between 2,000 to 4,000 kids a year from elementary to grad level courses. We also run our own internships and apprenticeships," he said.

Now they're even being recognized for it, earning an Environmental Stewardship Award. Their commitment doesn't just stop with the land, it continues through the thousands that visit them each year.

"We have an arts program where we invite artists to paint the land as they see it. We have sculptors, photographers every medium you can imagine," Phillips said.

In a world where there are more ranchers leaving the industry rather than coming in, Phillips aspires to watch the next generation of ranchers succeed.

Ranchlands is being given the Palmer Land Trust's 2019 Environmental Stewardship Award at the 10th annual Southern Colorado Conservation Award Ceremony in October at the Antlers Hotel.

Palmer Land Trust is also recognizing three other groups who they call superheroes saving ranches, helping farmers, photographing what's worth fighting for and growing our park system and public lands.