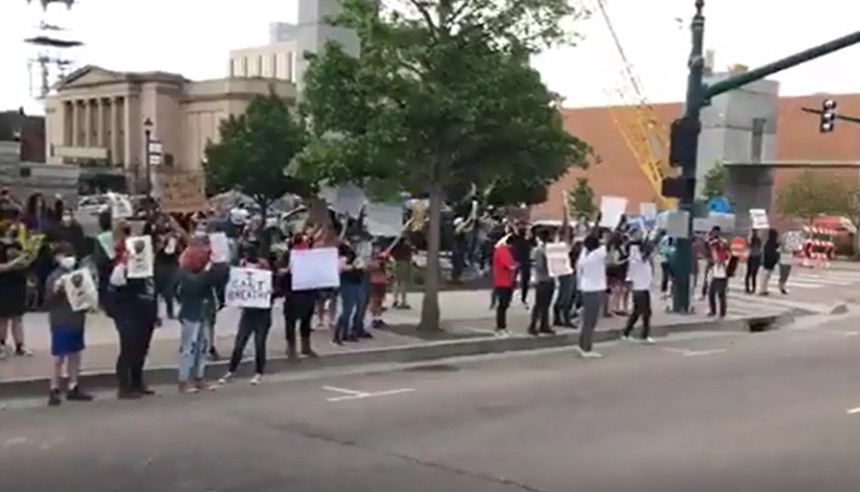 Prior to the violent protests that erupted after 5:30 p.m. near the city's Police Operations Center, peaceful demonstrations took place downtown.

KRDO reporter Zachary Aedo says the scene remained peaceful throughout the afternoon, unlike the widespread incidents of violence and vandalism the last two nights in Denver.

The protest, called "Peaceful Protest For George Floyd," was scheduled for 3 p.m. outside City Hall, according to its Facebook page. A second event, planned an hour later also in the downtown area, was called "Protest Against Police Brutality - Rest in Power George Floyd." Based on social media comments, it appears the two events were planned separately, but ended up joining one another at Acacia Park.

Likesha Thornton says she traveled down from Monument to support the demonstration and ask for more police accountability when officers use deadly force.

"We're here to support and to fight for our rights," Thornton said. "To support George Floyd's family and to just show that what's going on is not right."

The video of Floyd begging for air while a Minneapolis police officer pressed his knee against the African American man's neck has sparked nationwide protests.

Saturday marked the third day of protests in Colorado, but the first demonstration to happen in Colorado Springs.

Some of the protestors we spoke with condemned the violent riots that have erupted in other cities. However, many also expressed their frustration because they say other peaceful forms of protesting have not brought changes in policy.

"I'm just frustrated as a black man that we have to deal with this in our country," said Colorado Springs resident Keys Johnson. "This is what happens when we're tired. We're tired of following a process that looks like it's going to work, but it's not working."

Johnson said he understands it's unlawful to vandalize and riot, but he says more people notice when those forms of protest happen.

"We need peaceful protests of course," he said. "But at the same time, if you're only going to pay attention to the rioting, then I don't understand what else we can do for you."

People holding signs on sidewalks were met with drivers honking in support of the peaceful protest. Colorado Springs police officers helped direct traffic as protestors then marched through downtown.

At one point officers retreated back into their cars as a crowd of protestors approached them, yet no violence happened as a result.

Resident Darian Jones says he was happy with the turnout.

"I want to say thank you to Colorado Springs Police Department because they allowed this peaceful protest to happen," he said. "They didn't incite anything. They were allowing people to move clearly up the street."

"I didn't see anybody say anything bad," Jones said. "I think the people who had negative things to say stayed home and I say thank you."

People of all ages and races marched downtown and gathered at Acacia Park for the culmination of the two peaceful event around 5:30 p.m. Saturday.

Baylie Murr, a white teenager at the peaceful demonstration, says she attended in support of her African American friends.

"I won't fully understand because I'm not black and I don't know what they truly go through," Murr said. "But I think what we're going to remember is that everybody came together as one, no matter their skin color."

The majority of protestors were not following social distancing guidelines. However, many had face masks on and one person was even giving them out.

Despite public health officials discouraging large gatherings due to coronavirus, Dean says she these demonstrations are more important.

"You can't hear me through this mask and I need you to hear me," Dean said. "This is more important because this is going to change history. Maybe not today, maybe not next year, but this will be a part of what is created in the future for my son."

KRDO was live downtown this afternoon when the protest kicked off.