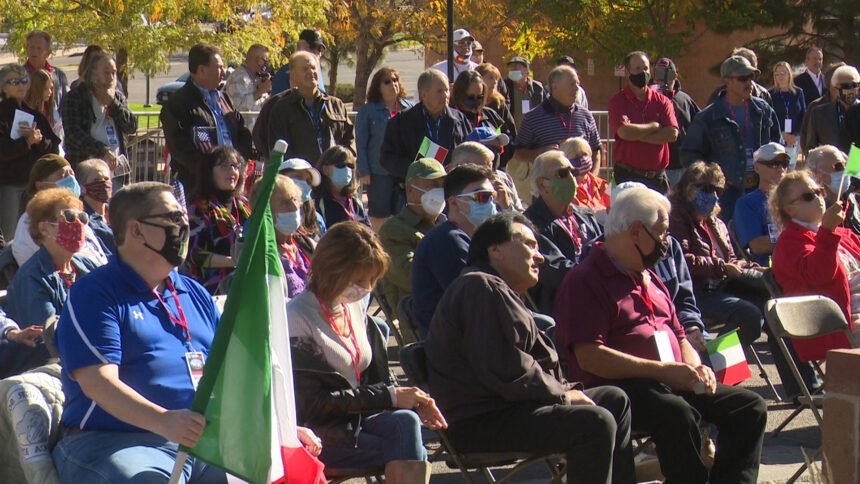 PUEBLO, Colo. (KRDO) -- In the midst of a fierce debate over the future of the Christopher Columbus Plaza on Abriendo Avenue, Pueblo's Italian community came together for the 115th annual Columbus Day Celebration.

However, Columbus Day 2020 had a different look: no protesters.

For decades, protesters from Pueblo's indigenous communities came out to the bust of Christopher Columbus across from the Rawlings library every holiday to chant and call for its removal. The protesters believe the Columbus figure is racist against indigenous heritage and culture.

This also stems from more than a dozen straight weeks of protests at the statue every Sunday. Some even led to violence and arrests.

However, this year's Columbus Day was abnormally quiet.

“We’re not hearing [protesters], isn’t it great?" asked Geno Carleo with the Sons of Italy Pueblo Chapter when he took to the podium Monday morning. "This is the way it was supposed to be every year.”

The local indigenous community agreed to peacefully protest the statue on Sunday, instead of Columbus Day. However, over the weekend, some people vandalized the statue with red paint and tomatoes.

“We’ve had some conversations with police it appears to be just one or two individuals," said Jerry Carleo, also with the Pueblo Chapter of the Sons of Italy. "People are going to be people. The takeaway was there is no permanent damage to the monument; it’s all good.”

Carleo disputes the historical beliefs presented by the indigenous community and their fellow protesters, but he said Columbus Day is about keeping their Italian tradition alive.

Earlier this year, the Colorado state legislature voted to no longer recognize Columbus Day as a holiday, and replace it with Cabrini Day one week earlier. Columbus Day is still recognized as a federal holiday.

However, this didn’t seem to alter the festivities Monday morning.

“What did they rename it? Cabrini Day?" said Carleo. "Cabrini Day is not an official federal holiday so that’s not what’s going on here. What’s going on here is the continuation of more than 100 years of continued tradition and celebration about what has resulted in the foundation of America.”

As the debate over the bust rages on, mediation between the city, Sons of Italy, and indigenous communities continues.

Carleo with the Sons of Italy tells KRDO he’s confident in the direction the mediation is heading.

Carleo says the city of Pueblo is considering a 'multi-cultural center' in front of the Rawlings Library, which would include the Columbus bust, as well as statues representing the Indigenous community and black community.