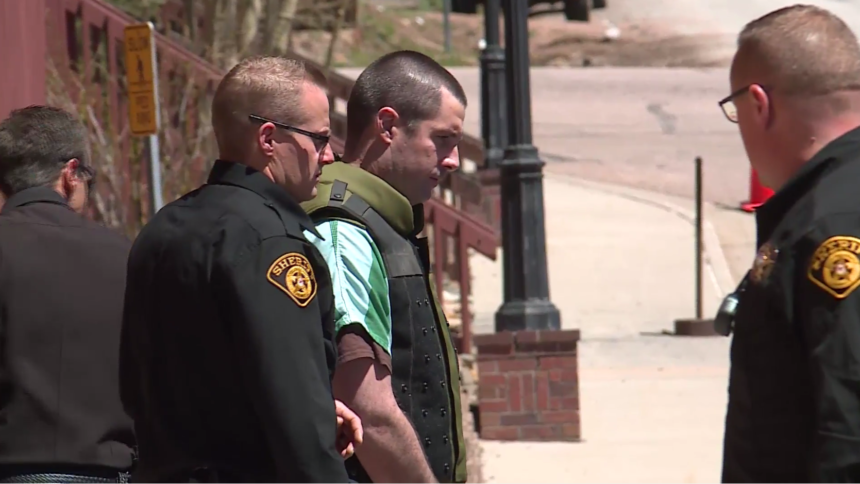 CRIPPLE CREEK, Colo. (KRDO) - Patrick Frazee has been found guilty of first-degree murder in the death of his fiancee, Kelsey Berreth.

Jurors deliberated for a little over two hours Monday after two weeks of testimony.

Kelsey Berreth was last seen on Thanksgiving Day, and her disappearance prompted a statewide search before Frazee was arrested and charged with murder. A large part of the state's case against Frazee came from testimony by his former girlfriend, Krystal Lee. Lee said Frazee tried to get her to murder Berreth multiple times before beating Berreth with a baseball bat.

Frazee was also found guilty of three counts of solicitation of murder and one count of tampering with a deceased body.

Sentencing followed immediately after the verdict was announced, and Frazee was sentenced to life in prison without the possibility of parole, plus 156 years for the other charges.

This is a breaking story. We'll have more on this page throughout the day. Check back for updates, and read below for background information.

Prosecutors have finished their closing arguments before a jury takes over in the murder trial of Patrick Frazee, who's accused of killing his fiancee, Kelsey Berreth, last Thanksgiving in Woodland Park.

Frazee has been through more than two weeks of testimony, including hearing his former mistress, Krystal Lee, testify that Frazee asked her to kill Berreth multiple times before committing the act. Lee said Frazee tricked Berreth into a blindfold and then beat her repeatedly with a baseball bat in her own townhome before moving her body and then burning it on a ranch. A forensic expert testified that Berreth was beaten at least 10 times.

Friday saw a bombshell revelation when an inmate who was in custody with Frazee testified that Frazee asked him to use his gang affiliations to make witnesses disappear. Prosecutors presented evidence that the handwritten notes were composed by Frazee and pointed to a desperate plot to derail the trial.

Monday, prosecutors took about an hour reiterating the timeline for the jury, pointing to the surveillance videos and cell phone records that tracked Berreth's last movements, and Frazee and Lee's subsequent movements. Prosecutors also pointed out Frazee's alleged plots to get Lee to murder Berreth on three occasions, and they reminded the jury about Lee's testimony: that Frazee said Berreth's last words were "Please stop."

Frazee is also facing a second-degree murder count, in case the jury can't decide on first-degree murder, but prosecutors said the plots and violent, bloody crime scene were evidence of intent. "Everything was premeditated, everything was deliberate," one prosecutor said.

Prosecutors said that Lee's story was corroborated by evidence, and that she was able to quickly point out the spot where Berreth's body was said to be burned. They said that none of Frazee's story -- he hasn't testified, and his only statements to officials tried to paint a picture of Berreth being an abusive mother who ended up running away -- had been corroborated.

When the defense took over for closing arguments, attorney Adam Steigerwald largely focused on the state's reliance on Lee's testimony.

Steigerwald called the prosecution's timeline "created ... and in some part, flat-out made up." He said that two pictures taken at a crime scene were reported to be at the same time in the timeline, but he said the shadows were different.

The defense also said there's no video of Frazee with a baseball bat, and he said there's no explanation for some of the gaps in the surveillance video. Steigerwald said there's no image of Frazee leaving with blood on his clothes and added that no neighbors saw or heard anything at the time of the alleged murder. He added that there wasn't any definitive DNA evidence linked to Lee.

Steigerwald said Lee's testimony only came after investigators started questioning, and that she wasn't initially forthcoming. When prosecutors presented a rebuttal, District Attorney Dan May said, "She knows a plea bargain will depend on whether she tells the truth."

The jury began deliberating at about 11:30 a.m. They will decide whether or not Frazee is guilty of:

We'll have more on this story throughout the day.

As he waited for his murder trial to begin, Patrick Frazee sent letters to a man he met in jail asking him to kill some of the witnesses, the former inmate testified.

Frazee is charged with murdering Kelsey Berreth, the mother of his toddler daughter. She went missing last Thanksgiving Day and her body hasn't been found.

Frazee had asked more than once, the former inmate testified last week, according to CNN affiliate KMGH. The former inmate, who prosecutors asked the media not to identify, is now on probation, the station reported.

In handwritten letters, the prosecution said Frazee referenced "instruction or suggestions to carry out the hits so to speak on the witness" and named several potential victims, KMGH reported.

One of the witnesses mentioned was Krystal Lee Kenney, who used to date Frazee and testified during the first week of trial that he made her clean up a bloody mess. She had also told the court he admitted to killing Berreth with a bat, according to KMGH.

The 33-year-old Colorado man is facing eight charges: two counts of first-degree murder, three counts of solicitation to commit murder, two counts of a crime of violence and one count of tampering with a body. He pleaded not guilty in May.

No cameras are allowed inside Frazee's trial. CNN has pieced together this wrap-up of the second week of Frazee's trial based on KMGH's daily coverage.

Before court ended for the week, the judge said the jury will also be able to consider charges of second-degree murder and manslaughter.

During cross-examination, the former inmate testified he had previously considered selling Frazee's letters online. He told Frazee's attorney, Adam Stiegerwald, he hoped to get a plea bargain by testifying.

Frazee allegedly wrote in a letter Slater read out loud that he would "really like to see Kenney with a bullet in her head."

"I know the DA helped put words in her mouth. No video, no weapon, no body, no forensics ... They're coaching her on the circumstantial evidence for a blank statement to match up," one of the letters read.

Kenney, who initially lied to FBI agents about her involvement, later pleaded guilty to a lesser charge of tampering with evidence and agreed to testify against Frazee. The defense team has questioned the plea deal.

Without her testimony, Slater told the court last week he didn't know where the investigation would be.

"We didn't know anything other than Berreth was missing, her belongings were missing ... her behavior was off," he told the court.

They were also able to trace her gun, which Berreth had with her before she went missing, he testified. A special agent previously testified Kenney had taken Berreth's gun -- allegedly at Frazee's request -- back to her hometown in Idaho and then gave it to an old friend.

Adams said investigators collected it from that friend and later determined it had been purchased by Berreth in 2014.

That matched what Kenney had told the court. She had testified Frazee killed Berreth with a baseball bat in her townhome and then burned her body in a black tote on a ranch.

A former police officer who now specializes in blood pattern analysis testified the blood patterns found in Berreth's home were consistent with someone being struck multiple times -- and with a bat.

"People aren't easy to kill," the former Denver officer, Jonathyn Priest, told the court. "They're very resilient. And beatings are nasty in that they don't really have the effect that they have on television."

He testified that bloody footprints found around Berreth's home indicated a "pool of blood" was stepped through.

"There is nothing here that tells me the death was accidental," Priest told the court. "It's very consistent with what I'd expect to see in a homicide."

When asked why more blood wasn't found, he told the court that Kenney's testimony of cleaning the crime scene would explain why a lot of the blood was gone.

Defense Attorney Ashley Fridovich Porter confirmed with Priest he hadn't seen many of the blood stains before they had been cleaned and a big part of his analysis was based on Kenney's descriptions.

Rogers, with the CBI, was also questioned about apparent tooth fragments authorities found in a burned area on a ranch. That's where Kenney testified Frazee burned Berreth's body in a black tote.

Adams County Fire Rescue Investigations Chief Jerry Means testified that photos of the burn area show there was melted black plastic -- consistent with how plastic of the black tote would have melted.

During her testimony, Kenney had also told the court that after the alleged killing, Frazee instructed her to take Berreth's phone and send texts to Berreth's mother and boss before taking the phone as far as she could.

A Teller County Department of Human Services employee testified that when she talked to Frazee after Berreth's disappearance, he told her they texted for two days after Thanksgiving.

Frazee said he spoke with Berreth again on the morning of November 25, Mary Longmire testified. He called her later that day and it went to voicemail, she testified that he told her.