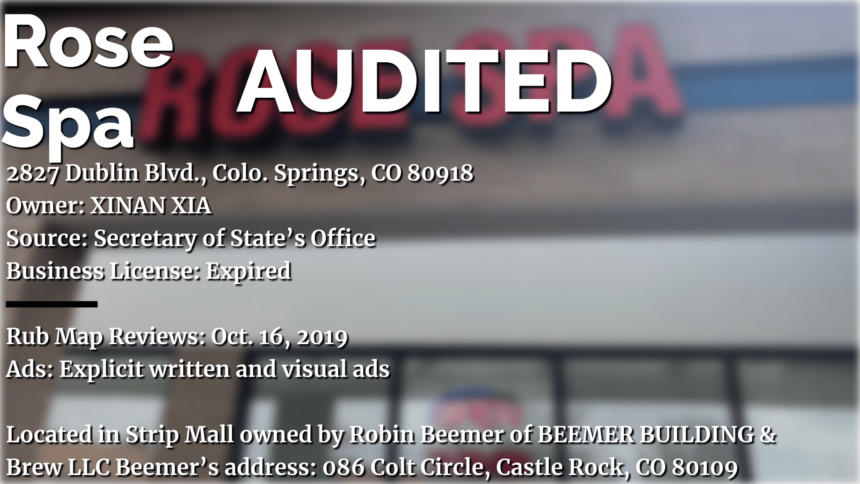 COLORADO SPRINGS, Colo. (KRDO) - The owner of a massage parlor in Colorado Springs was arrested on several charges including prostitution.

The Colorado Springs Police Department (CSPD) announced on Tuesday that their Metro Vice Unit wrapped up a months-long investigation into the Rose Spa massage parlor, located at 2833 N. Dublin Blvd.

You may remember the Rose Spa was featured in the KRDO NewsChannel 13 special investigative series, Hiding in Plain Sight, spotlighting prostitution and human trafficking in the Colorado Springs area.

According to CSPD, detectives began an investigation into the Rose Spa massage parlor in May, after receiving numerous tips about acts of prostitution being offered to customers. Police served a search warrant at the spa in July.

Police said they had enough probable cause evidence gathered to arrest the Rose Spa owner, 55-year-old Xinan Xia, on charges of pimping, money laundering, and keeping a place of prostitution.

When 13 Investigates stopped by Rose Spa to talk to them about the arrest on Tuesday afternoon, the massage parlor was open. It's unclear if those working inside knew about Xia's arrest, but shortly after our crew left, they turned off the lights and appeared to close.

Multiple business owner in the Cottonwood Square complex said they are grateful police took action and said that activity at Rose Spa seemed to quiet down over the last few months.

We found the most recent illicit review of the parlor was posted online in September, two months after police say they searched the property.

In April 2019, a woman working inside Rose Spa told 13 Investigates she never left the building even when she was finished working.

The head of CSPD's Metro Vice Unit said on Tuesday that these types of cases are a priority and generally take time to result in serious charges.

If you have a situation you want our team to look into, send us an email at 13Investigates@krdo.com.