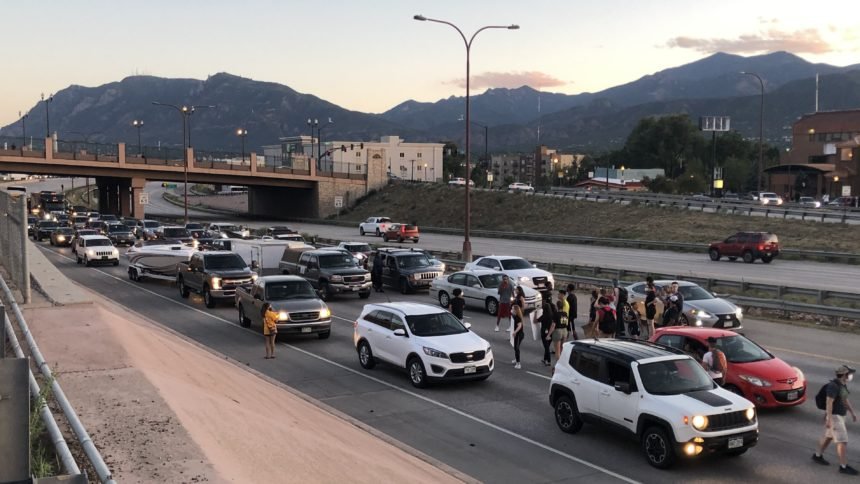 COLORADO SPRINGS, Colo. (KRDO) -- The Colorado Springs Police Department says it has launched an investigation into a protest that caused delays and a temporary closure of Interstate-25.

On Tuesday evening, CSPD was called to I-25 near Cimarron Street for reports of about 30 protesters blocking an on-ramp and marching on the interstate on foot.

Police Chief Vince Niski says that their patrol officers were responding to several priority one dispatch calls, including a shooting. Niski says they couldn't take away more resources to immediately respond. A police department spokesperson told KRDO that officers were called to reports of shots fired on Silkwood Drive and Verde Drive between 8:20 and 8:59 p.m.

The Colorado Department of Transportation and Colorado State Patrol responded in the meantime, setting up a detour to divert traffic until officers could arrive.

CSPD deployed the Public Order Response Team to disperse the protesters and make any arrests if necessary to reopen the interstate. By the time PORT arrived, police say demonstrators had fled.

CSPD says it is launching an investigation to identify the protesters involved and make arrests.

"I want to make it clear that the Colorado Springs Police Department will not tolerate blocking of freeways, damaging our community, or putting lives in danger," Niski said in a statement. "The actions of the few last night were selfish, dangerous, and create more of a divide when our community is moving forward together."