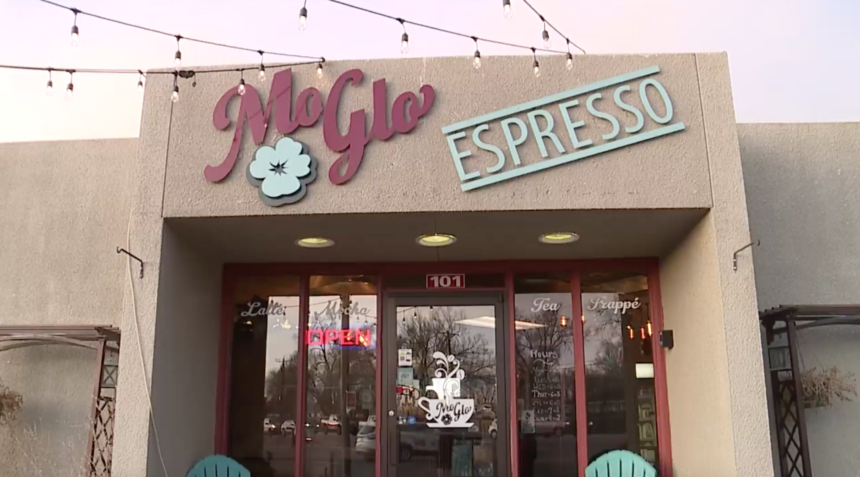 COLORADO SPRINGS, Colo. (KRDO) -- Police are on the lookout for a stolen royal-blue Ford Escape after a theft at a coffee shop in Colorado Springs.

At 8 A.M. on Tuesday morning, a woman walked into the 'Morning Glory Espresso' coffee shop off Fontaine Boulevard and tried to buy a muffin. After her card was declined several times, the barista on duty, Jordyn, told the woman she could sit in the shop to keep warm, even offering her free coffee.

The woman stayed there for several hours, falling asleep on the couch. Jordyn politely asked the woman to leave several times throughout the morning, but she refused.

Around 10, after all the customers had left, the woman stood up, pulled out a knife and told Jordyn she would need to take her car. Jordyn ran from the building, asking for help from the men working in the 'Roll Up' food truck next door.

One of the employees at 'Roll Up' tried to subdue the woman, but she was frantically waving her knife at them, along with a bottle of pepper spray. The woman was able to drive away with Jordyn's Ford Escape, but not before one of the men working at 'Roll Up' slashed one of the back tires.

"Jordyn does what we always do for people," said owner DeeDee Reinstein. "If you're outside and it's cold and you want to warm up, have a cup of coffee, but then we need you not to be camping out here."

The woman was described as Hispanic, shorter in stature, with a tattoo on her face.

The SUV has the license plate number CCG-533 and a moose sticker on the back right side. It also has a flat back tire.

If you have any information, please call Colorado Springs Police.

The coffee shop will be closed at 2 P.M. on Wednesday.