Overview: We’re tracking the monsoon flow and intrusions of low-level moisture that should increase the coverage of thunderstorms and their tendency to produce areas of heavy rain soon.

Today: Mostly sunny this morning, then partly cloudy, breezy at times and warm with high temperatures in the 80s to lower 90s for the plains, 70s to lower 80s for our local mountain communities and high mountain valleys. Isolated thunderstorms should develop mainly over and near the mountains this afternoon although a couple of rogue showers or thunderstorms could also pop-up over the plains late. In general, the showers and thunderstorms today will be lacking in moisture and likely to produce brief rainfall and a cool, gusty wind in most cases, but the stronger cells could produce localized downpours and frequent lightning as well. We do not expect severe weather to be a great threat with thunderstorms today, but some strong wind gusts will be possible at times.

Tonight: Showers and thunderstorms will end this evening then partly cloudy. We expect low temperatures in the 50s to lower 60s for the plains with 40s over our local mountain communities and most of the high mountain valleys. A weak cold front will begin to spread low-level moisture over the plains late and some patchy low clouds could develop over our far eastern counties by morning.

Sunday: Any patchy low clouds over the plains will break up quickly in the morning, but the low-level moisture responsible for them will continue to work up the terrain towards the mountains through the day. The increase in available moisture should keep temperatures slightly cooler over the plains as compared to Saturday, but more importantly this moisture will support a greater number of afternoon and evening showers and thunderstorms that will be capable of producing some healthy downpours. Although not a high risk, the strongest storms might be more likely to produce some hail and potentially damaging wind gusts. Most of the afternoon will be breezy and a little cooler with high temperatures in the 80s to near 90 for the plains with primarily 70s over our local mountain communities; the high mountain valleys should reach the lower 80s again.

Extended: Showers and thunderstorms are likely to remain numerous over much of the area again on Monday with some areas possibly picking up significant rainfall again. Although some moisture associated with the summer monsoon will remain over the area, the lower levels of the atmosphere should dry out considerably which will warm the air and result in only spotty, generally weak showers and thunderstorms Tuesday and Wednesday. The available moisture may increase a little late in the week, and if so the daily showers and thunderstorms may again increase in coverage and ability to produce bursts of heavier rain. 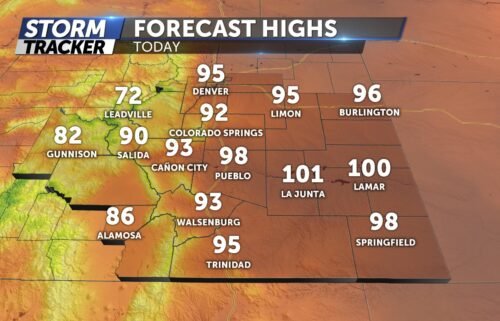 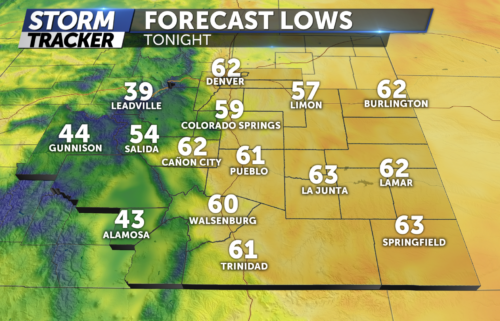