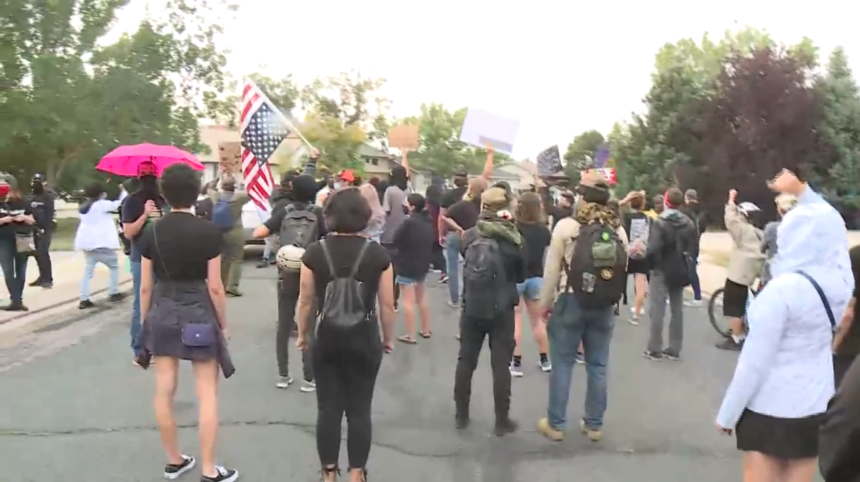 COLORADO SPRINGS, Colo. (KRDO) -- Colorado Springs police say that three people have been arrested for felony charges after a raucous protest that happened in early August outside of the home of a CSPD officer.

The new arrests stem from a protest on Aug. 3 in the Pulpit Rock neighborhood. Protesters were calling for the termination of an officer who was involved in the fatal shooting of De'Von Bailey. The officer was cleared of any criminal charges and civil rights violations.

We had a live stream during the protest, which you can watch at this link here.

Several protesters were armed with rifles while wearing face coverings, and it appears that two of the people arrested in connection with the protest were those armed protesters.

The individuals arrested on Thursday were identified as 36-year-old Sherrie Smith of Fountain, 33-year-old Lloyd Porche of Denver, and 20-year-old Charles Johnson of Colorado Springs.

CSPD says Smith and Porche were armed with rifles. Johnson is accused of trying to take a cell phone from a citizen. All three were charged with felony offenses related to "engaging in a riot" or "inciting a riot."

"What may have begun as a peaceful protest, quickly escalated into riotous and illegal behavior," Sokolik said in a statement.

CSPD officers were at the scene of the protest as it took place, however, no arrests were made at the time, and the protesters were able to leave the neighborhood without incident.

Lt. Jim Sokolik with CSPD said Friday that there was a delay in the arrests and acknowledged the frustration with the delays, but he said "the safety of our community is paramount."

We're working on getting more information on the arrests, including why there was a delay in arrests and why the protest wasn't declared a riot at the time of the event.