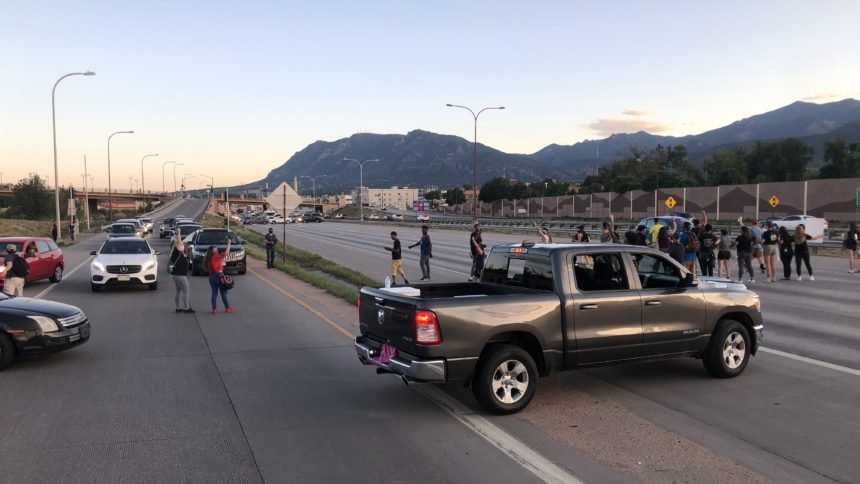 UPDATE: The Colorado Springs Police Department says it's arrested four more people on Friday. They've been charged with obstructing a highway or other passageway, a class 3 misdemeanor.

COLORADO SPRINGS, Colo. (KRDO) -- The Colorado Springs Police Department confirmed to KRDO that at least two protesters involved in the demonstration on Interstate 25 Tuesday night have been arrested, and more arrests are likely.

The two who were arrested were charged for blocking traffic with their vehicles on I-25, and a spokesperson with CSPD said they're getting information on other possible arrests. The protesters arrested by CSPD haven't been identified.

"Right now — we are continuing to identify and make arrests in the case. So a lot of the charges are going to be dependent," Sgt. Jason Newton said. "We're reviewing video footage, reviewing evidence, it could be reckless driving, impeding traffic, blocking the highway."

The small group of about 30 protesters started in downtown Colorado Springs before marching to Bijou Street Tuesday evening. The group then went down an on-ramp to I-25 while several vehicles stopped in the northbound lanes of the interstate to block traffic. No emergency response vehicles were caught in the initial backup, but many cars reversed or turned around to leave the area within about 30 minutes.

Colorado Springs Police also are searching for suspects who damaged vehicles on the interstate.

"Some of those protestors as cars were driving by they damaged their cars. They were actually kicking and punching. So there is damage to citizens' cars," Sgt. Newton explained.

See a recap, including a video from the protest, here.

CSPD said in a statement on Wednesday that the "department will not tolerate blocking of freeways, damaging our community, or putting lives in danger. The actions of the few last night were selfish, dangerous, and create more of a divide when our community is moving forward together."

While investigators said it's important for those who commit crimes to be held accountable they remind the community that this situation is not a reflection of all protesting in Colorado Springs.

"We will not paint all protestors and all people with whatever movement you're with the same brush as the people who blocked I-25," Sgt. Newton said. "We know that those are not the same people that actually want their message to be heard."