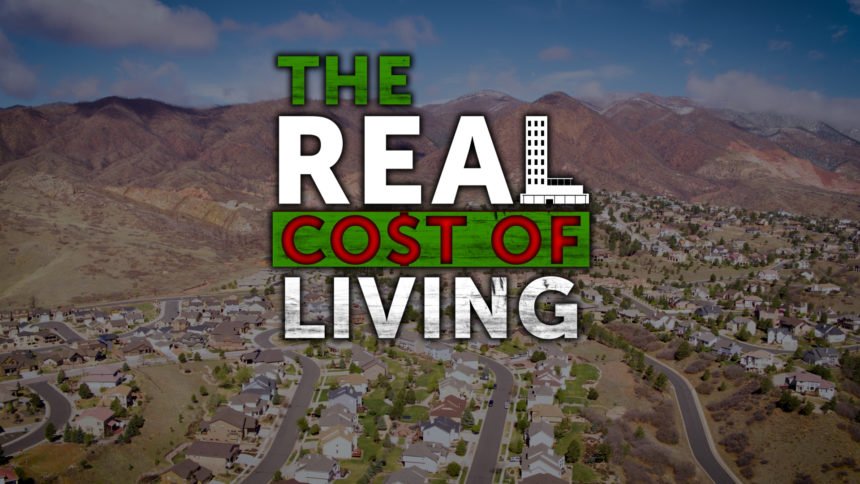 COLORADO SPRINGS, Colo. (KRDO) - Is Colorado home, or just a stop along the way? The answer may be different for each of us, but living in the Centennial State doesn't come cheap.

Many who are on the hunt for an affordable place know there are a lot of challenges in finding one, especially with record-high rent prices, and salaries not keeping up.

A local economist says the average renter in Colorado Springs makes about $16 an hour. At that wage, rents should only be about $800 dollars a month, but instead they're averaging $1,200. About half of renters in Colorado Springs pay 30% or more of their income on rent.

"It was 1,200 a month for a one-bedroom apartment," said 26-year-old Melissa Leider, a new homeowner and former renter.

That steep price has now become the norm here in Colorado Springs, increasing by an average of $400 over the past four years, according to data collected by the Southern Colorado Apartments Association.

For Leider, it meant having to make sacrifices.

"I worked three jobs. I was teaching, driving Lyft and Uber, and [working at] a sandwich shop. So between the three of those I could make it work with the rent," Leider said.

The Executive Director of the Southern Colorado Apartments Association, Laura Nelson, says the reason for the high rent is simple: supply and demand.

"We need much more supply and the housing crisis did hold off that building for a very long time," she said.

Over the past five years, we've seen a growing population and strong economy. Many attribute it to the Springs' recent reputation as one of the most desirable places to live in the U.S.

"We have roughly 8,500 units proposed, only about 2,500 of those are actively being built right now," Nelson said.

Rent on those properties is expected to be on par with the average, but according to Tatiana Bailey, an economy professor at UCCS, income isn't keeping up.

"We are still about 14% lower in average pay than the U.S. and about 16% than the state of Colorado. That's a big difference," Bailey said.

It also doesn't help that millennials, the biggest generation living in apartments, are having to pay some of the highest college tuition on record.

"It's a huge issue. The average student loan out there is about 30,000 now and if you look at the most recent information for recent graduates about 75% of college graduates have some type of student loan," Bailey said.

While the average renter has many costs adding up, so do builders, adding to the reason why rent prices continue to soar.

"Lack of supply of vacant developed land in addition to high labor and material costs has made buying a home or building out an apartment incredibly expensive," Bailey said.

That same problem is also affecting home builders. The median price of a home in Colorado Springs is $339,000.

Todd Anderson has been building houses in Colorado Springs since 2004. He says the rising costs of homes are because of the price of land and regulatory costs.

"There has been a number of fees and entitlement costs added to the cost of that lot. The lot that we could buy for 30,40,50-thousand around 2010 is now 70,80,90-thousand dollars and it's the same size lot in generally the same location," Anderson said.

A study by the housing and building association broke down the estimated costs of building a new house in Colorado Springs. The cost of developing a lot is about $50,000, while home construction is about $34,000. That means besides labor and materials, builders are spending $84,000 in regulation costs.

With trends showing prices will keep rising, these same homeowners are worried about what it may mean for their future.

"Like this house is good for us now but in five or six years we may need a bigger house and it's discouraging to think about that," said Joshua Andrew, a first-time homebuyer.

For now, many new builds are three-bedroom townhomes, aimed at getting more affordable homes for families. Builders are hoping they can be the "new" starter homes, priced at around $200,000.