COLORADO CITY, Colo. (KRDO) -- Tonight, officials in Colorado City held a board meeting to give residents an update on when running water will be restored in the town. Officials largely didn't have answers for residents that are searching for answers.

Yesterday, on the fourth day without running water, Colorado City residents received a mobile public safety alert warning of an imminent threat from a shortage of water.

The problem began on Tuesday, and since then, access to water has been limited to Colorado City residents. For some, there's no access at all.

"The last two days the pipes have been totally dry. When we noticed the volume of water decreasing, we started filling up the tubs and basins," said Brenda Mason, a Colorado City resident.

WHEREAS, the Colorado City Metropolitan District suffered or there is an imminent threat that Colorado City will suffer from an immediate shortage in its supply of water which threatens the health, welfare, and safety of the inhabitants and visitors of the city and which requires immediate action.

NOW THEREFORE BE IT RESOLVED there is hereby declared an emergency Water Conservation Order.

All outdoor watering is prohibited until future notice. Enforcement will be per Rules and Regulations

In addition to the statement, a flyer was distributed door-to-door laying out the water restrictions and was is prohibited. Click here to view the flyer.

Thanks to funding from Pueblo County, the Pueblo Cooperative Care Center sent a portable shower trailer for residents in need. The mobile shower unit has three showers, all fitted with running hot water, as well as an area to use the restroom.

As of Saturday, Colorado City residents that live at elevations closer to the water tanks are completely without water, while some lower elevation areas continue to have access to water. That's where the trailer was stationed.

The shower trailer will be back in Colorado City Saturday and Sunday at the community swimming pool.

For now, Metro Water District says there is not a timetable for when the tanks will return to running water capacity.

Editor's Note: A previous version of this story said there was a power outage affecting the water. San Isabel Electric reported that there were no outages or repairs to lines affecting the metropolitan district. 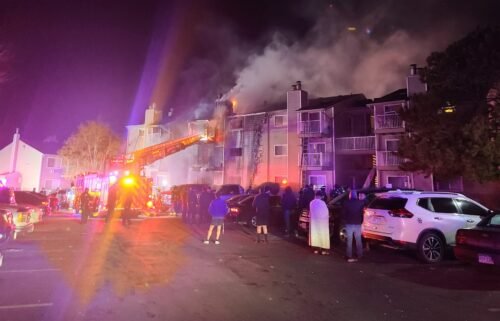