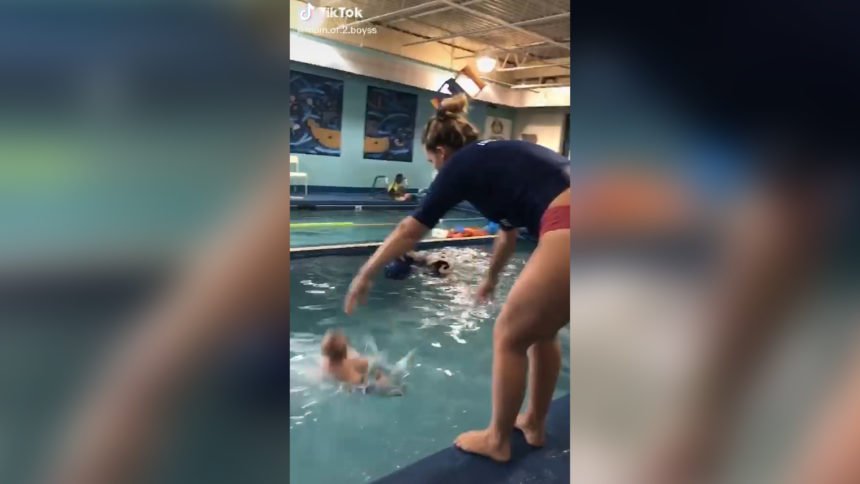 COLORADO SPRINGS, Colo. (KRDO) -- A Colorado Springs mom says she’s getting death threats after a video of a local swim instructor tossing her baby into a pool went viral.

It’s gotten at least 50 million views on TikTok where it was originally posted, and at least 20 million more on Twitter.

Sometimes you gotta Gronk spike your baby into the pool to see what they’re made of @PodfathersShow pic.twitter.com/9dZ6aASX3w

It sparked controversy about whether the practice is safe for young kids. Little Fins Swim School instructor Jillian Armstrong tells KRDO it’s meant to teach kids what to do in case they fall into water.

"This is not something that we do in the first class at all," Armstrong said. "This is a work in progress. We are certified swim instructors and went through extensive training."

Armstrong said baby Oliver came to a float position after he was thrown in, but if he hadn't, she would have intervened.

"We only let them stay under water for about three to five seconds before I will pick them up and bring them up onto the surface of the water," she said.

The swim school says it’s received hate mail, but also calls from people wanting to enroll their children in classes.

Krysta Meyer is the mom of 8-month-old baby Oliver you see in the video. She's also been getting mixed reaction.

"I've never been so loved and hated all at the same time," Meyer said. "People were just telling me that I'm a psychopath, that I'm psychotic for doing that to my kids...that I should just die."

Meyer said she doesn't let the hate get to her, because she knows her love for her two boys.

"Everything I spend my money on, everything I put my time in to, it's all 100% for my kids. There's not one thing I can think of that I don't do for my kids," Meyer said.

She started her TikTok months ago as a joke or maybe to watch a funny video. Meyer tells KRDO she didn't expect the fame or views, but is using her platform to promote water safety.