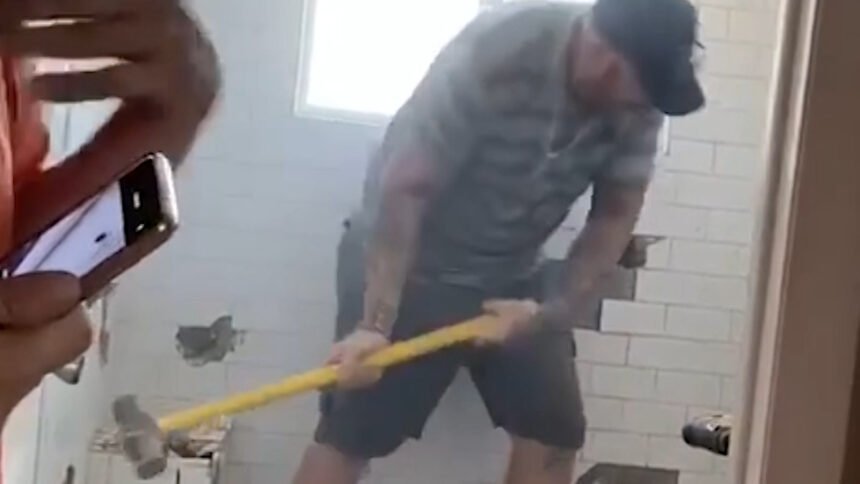 COLORADO SPRINGS, Colo. (KRDO) -- A viral video of a Colorado Springs contractor bashing in a bathroom after a customer refused to pay for work has now sparked not just one but two investigations.

On Sunday, KRDO reported on the story of Colorado Springs homeowner Amber Trucke. She says she paid contractors from Dream Home Remodels of Colorado $3,330 of an owed $7,555 to rebuild her bathroom shower. Trucke said she wasn't pleased with the work the contractors had done and wanted to inspect it further before handing over the final payment of more than $4,000.

As a result, Trucke says Terry Gregory, a co-owner of Dream Home Remodels of Colorado, took a sledgehammer and bashed the bathroom tiles they just finished working on.

The cell phone video was recorded by Trucke's roommate. The homeowner says the video of Gregory smashing her bathroom brings tears to her eyes.

"This was more than just trashing my bathroom," said Trucke. "My sense of safety is gone.”

Trucke says she filed a report with the Colorado Springs Police Department. CSPD tells KRDO they are looking into the incident, but would not comment if the smashing of the bathroom warrants criminal charges.

If the plumbing was relocated, then a proper master plumbers license through the state and registration through the regional building department would be required as well as a proper permit.

According to the Pikes Peak Regional Building Department's own website, Dream Home Remodels of Colorado has a Class B-E License. Under the B-E license definition, the license allows for the holder "to contract for the construction, alteration, and repair of structures accessory to one and two-family dwellings not intended as enclosed habitable space such as decks, fences, sheds, patio covers, and detached garages and workshops and for interior nonstructural repair or remodeling of one or two-family dwellings."

Dream Home Remodels of Colorado reaffirms they are in compliance with the codes and are 100% licensed to conduct the work at Trucke's home. As for both investigations, the contractors tell 13 Investigates neither the Pikes Peak Regional Building Department nor the Colorado Springs Police Department have contacted them, and they have no knowledge of either investigation.

The contractors say the story is fabricated and they've received death threats since the incident. Dream Home Remodels provided KRDO a statement on Sunday.

"After several weeks of work for a customer, communication broke down at the end of a project. There was no displeasure expressed, and we proceeded to ask for payment on the project by the end of the day. Communication broke further after that and resulted in our company repossessing a tile shower. We regret that this contract went sour. It has never happened before and is not something that is made regular practice. There was several other projects included in the contract that she is also unwilling to pay for, including a vanity, mirror, light fixture, 2 ceiling fans, plumbing work, fixing rotten framing in her walls, and an exterior door replacement."

Trucke did not provide 13 Investigates a copy of a contract with Dream Home Remodels of Colorado, however, she did provide invoices with the proof of payment. The contractors say she did sign a contract, and they have a copy but wouldn't provide one to our investigators.