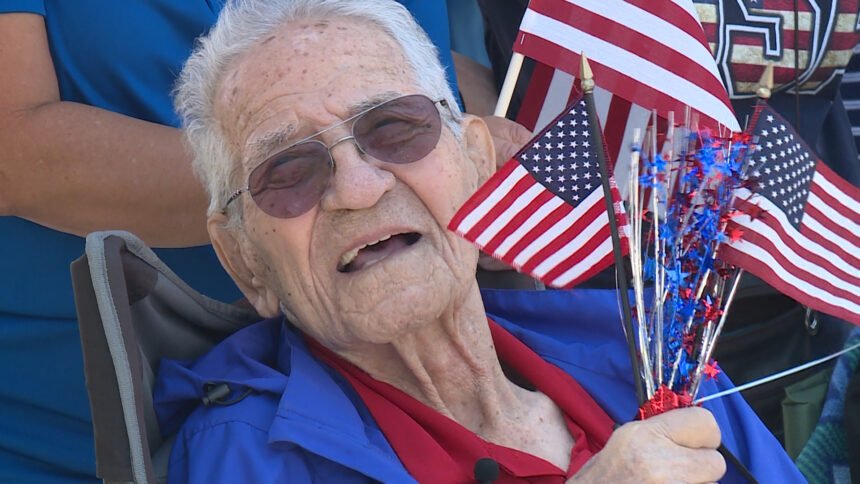 COLORADO SPRINGS, Colo. (KRDO) -- Cole Griego turned 96-years-young on Wednesday. His daughter knew there was only one way to honor him.

“I think this will be a little bit of what we can give back to him for the time that he gave," said Renee Tabet, Griego's daughter.

A drive-by parade, complete with a color guard, the American Legion Riders, CSPD, CSFD, dozens of veterans, friends and family -- dozens of cars deep -- all came out to recognize their World War II hero with a memorable birthday salute in Briargate on Wednesday afternoon.

“I think this will bring more joy and some heartfelt thanks from the community," Tabet said.

Griego, who is originally from New Mexico, was drafted into the Navy in June of 1943 at 19 years old. He served as a Corpsman during the Battle on Iwo Jima. For 37 days, he was under constant enemy fire and lost quite a few of his fellow marines. Griego was at the base of Mount Suribachi, tending to injured soldiers, while his fellow soldiers raised the American flag on the island, the famous moment captured on camera by Joe Rosenthal.

Griego was awarded the World War II Victory Medal. He is, without question, worth every salute.

And there's also little doubt he won't soon forget his friends, new and old, who came out to salute and wish him a "Happy Birthday."

"Thank you one million times," said Griego. "It's the best day I’ve ever had in my life. Thank you.”