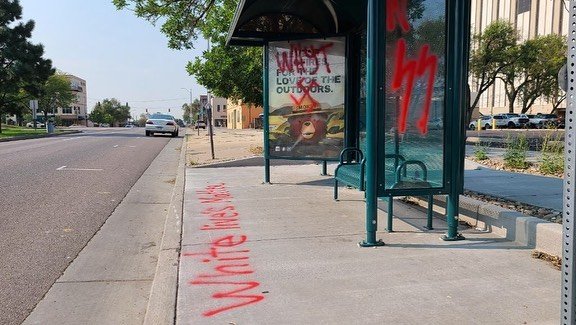 COLORADO SPRINGS, Colo. (KRDO) -- The city of Colorado Springs neighborhood services spent time Tuesday morning cleaning up racist graffiti near a bus stop at the intersection of Wahsatch and Kiowa.

"White Lives Matter" and a Swastika were painted on and near the bus stop. The Colorado Springs Mayors office told KRDO the graffiti was reported via the GoCOS app and neighborhood services responded to clean it up within 30 minutes.

The city estimates the labor to clean it up costs $150.

White Lives Matter is a Neo-Nazi group that formed as a racist response to the Black Lives Matter movement, according to the Southern Poverty Law Center. Experts say more white supremacists are using the hate groups slogans as part of their tactics.

"It definitely pierces every fiber of my being to see that. I have a lot of friends and family who are people of color here in town," Luis Valencia, Jr. said.

New Black Lives Matter graffiti popped up at the same spot Tuesday afternoon but was cleaned up by 4:30 pm.

According to the Black Lives Matter foundation, it's mission is to eradicate white supremacy and to intervene in violence inflicted on black communities.

"I want to make that very very clear. At no point is anybody that says black lives matter saying that white lives don't matter," Valencia said.

Activists are calling on Colorado Springs leaders to take a stand against the hate speech.

"I also request that Mayor Suthers and CSPD give a statement denouncing and saying that they are against hate speech in any way, shape, or form," Valencia said.

The Colorado Springs Police Department said it did not receive a report about the graffiti near the bus stop at Wahsatch and Kiowa. However, CSPD said it did respond to two other graffiti calls in the nearby area. A CSPD spokesperson told KRDO one of those calls involved a private property that had "BLM" and a Swastika painted on it. The other call was racial in nature but the investigators are still working on the initial report, according to CSPD.