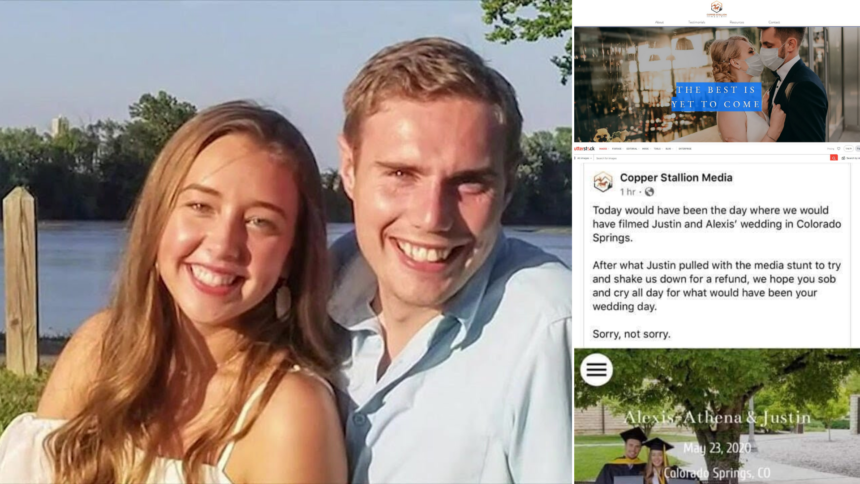 COLORADO SPRINGS, Colo. (KRDO) - After our story aired about a man who was held to his contract and refused a refund for his wedding video when his bride unexpectedly died, the saga exploded online between the grieving widow and the company. We've now learned the alleged owner of the company is pending investigation by the Nevada Consumer Affairs Office.

Thousands of people joined the online backlash, including former clients and contracted employees who claim their money was stolen by Copper Stallion Media and the man they say is behind the company, Jesse J. Clark.

Since our story, more than thirty couples and photographers across the country have contacted KRDO NewsChannel 13 reporter Julia Donovan over the last week, also saying they lost money to Copper Stallion Media or Clark. The couples say they never received a wedding video, and the photographers claim they never got paid.

Nicole Diaz, a bride from Massachusetts, told us she hired a wedding photographer from a company allegedly owned by Clark and the photographer showed up the day of the ceremony, but she never got a copy of her video.

"Every year my wedding anniversary comes around and it's just not the same. You just can't go back and recreate footage. It's irreplaceable," Nicole Diaz told KRDO.

"I did 9 or 10 weddings for him and they’ve only paid me for 4 or 5," photographer Kelby Casebolt of Texas, told us in an interview.

The Knot, the popular wedding planning website which Justin Montney used to find Copper Stallion, told KRDO in a statement on Wednesday that it recently discovered the company's page on its website was created by Jesse J. Clark, under a fake name.

"This violates our Terms of Use. As soon as we became aware, we took immediate action and removed Copper Stallion Media from our marketplaces on The Knot and WeddingWire," said a spokesperson for the website. "We are conducting a thorough investigation across our sites to determine if there are any other businesses that have been created under false identities by individuals associated with Copper Stallion Media and will take quick action to remove any listings that are found."

Multiple photographers who say they performed contracted work for Copper Stallion Media sent us copies of the checks they received from Copper Stallion addressed from 6671 S. Las Vegas Blvd., Suite 210.

Five addition people who reached out to KRDO -- a mixture of photographers and couples who say Jesse Clark ran businesses that cheated them out of thousands -- tell us they filed formal reports with the Nevada Attorney General's Office and met its members, and officials from the Office of Nevada Consumer Affairs, about the situation last September.

Shane Persaud from the Office of Nevada Consumer Affairs confirmed on Thursday to KRDO an investigation into Jesse J. Clark is pending, but wouldn't go into detail.

According to its website, the Office of Nevada Consumer Affairs "provides enforcement of the state's consumer protection laws for consumers that live in, work in and visit Nevada." If the office finds anything potentially criminal, it's obligated to hand the investigation over to the Nevada Attorney General's Office.

The Nevada AG's office would not confirm whether its currently investigating Clark. It sent a statement to KRDO saying in part, "We have no recent complaints on Jesse Clark or his alias names, and though we do not confirm or deny the existence of investigations within our office, it should be noted that our office is complaint driven and any suspicious activity should be reported in the form of an officially filed complaint."

While some of the alleged victims we heard from are from Colorado, the Colorado Attorney General's Office also wouldn't tell us if it's investigating Clark, but encourage people to report suspected fraud here.

KRDO also learned Jesse J. Clark was prosecuted by the Massachusetts Attorney General in 2013 for failing to deliver wedding videos promised in contracts to more than 100 couples. According to the Massachusetts AG's Office, he was issued $500,000 in judgements and ordered to deliver any video to the affected couples.

"The AG’s Office has not been able to collect the monetary portion of the judgment at this time," a spokesperson told us.

Massachusetts attorney Nicholas Frye told us he filed lawsuits separate from the AG on behalf of his clients who say they were also robbed by Clark. He sent KRDO documents showing Jesse J. Clark still owes his clients more than $100,000 in judgements, as well.

Frye believes Clark continued to do business in this way even after the 2013 lawsuit, based on phone calls he has received from alleged victims all over the country.

"As soon as the heat gets on him in one place, he moves to another place, changes the business name, and just keeps doing it," Frye said in an interview with KRDO.

Frye is the lawyer in a YouTube video posted by the Worcester Telegram and Gazette in 2013, showing Jesse Clark in court, which has gained more than 20,000 views over the years. He thinks this may be the reason people keep calling him about Clark.

"Every couple months, I get a phone call from somebody -- and it's been in California, it's been in Colorado, Texas, Vegas -- saying he's doing the same thing [there]," he said. "As soon as the heat gets on him in one place, he moves to another place, changes the business name, and just keeps doing it."

The man in our original story, Justin Montney, lost his fiancée, Alexis Wyatt, in a car crash on Highway 24 earlier this year. Prior to that, Montney had signed a non-refundable contract with Copper Stallion Media for video services on their wedding day, which was supposed to happen this month. Montney acknowledged the contract in an email with the company, while still asking for his deposit back due to the circumstances. Copper Stallion Media explained that it couldn't refund the money due to the contract, but would honor Montney's request to credit him for a possible wedding 10 years in the future.

Copper Stallion hasn't answered our direct requests for comment through multiple phone calls and messages online, but the statement below was posted on the company's website last week. The statement was removed within days, but it can be seen on a cached archive page.

On May 20, 2020, our company was subject to an online smear campaign for not refunding a client who died in a car accident. The client signed a non-refundable contract. As a result, friends, family and strangers have emailed, called and left reviews of our company on social media. Online bullying is real. We are in contact with local authorities to see what can be done in terms of criminal charges. We are also reaching out to legal counsel to see what legal action we can take to obtain a judgement for damages. No company should have to go through this for upholding a signed legal document. With that being said, we are currently no longer interested in taking on any more bookings. We will complete our current contractual obligations with our booked clients but will no longer accept any new clients. After all our current contractual obligations are completed, we will sunset Copper Stallion Media.

Statement written on CopperStallionMedia.com on Friday, May 22. The statement was later removed, and the website was left blank by May 27.

The website was altered several times over the course of the following weekend, but it returned to its original layout with stock images and videos on Tuesday before turning blank on Wednesday.

By Saturday, the day that Montney and Wyatt were due to be wed, Copper Stallion Media still hadn't provided a direct comment to KRDO, but the company's Facebook page wrote a post that drew criticism from hundreds of thousands of people across social media.

"After what Justin pulled with the media stunt to try and shake us down for a refund, we hope you sob and cry all day for what would have been your wedding day," read the post from Copper Stallion Media's Facebook page, which was deleted soon after, as well.

After Copper Stallion Media's review pages on Yelp and The Knot received backlash from Justin's friends and other users, the company purchased the domain justinmontney.com, filling it with doctored pictures from Montney's Facebook page, screenshots of exchanges, and a personal message to Montney saying that the company used his $1,800 to pay for the website for two years. The website also features angry voicemails, claiming they're from Justin. Justin told KRDO that is not his voice.

Copper Stallion Media changed its homepage Saturday to a message saying it bought the domain and intended to keep posting content on there.

WARNING: Explicit language is present in these screenshots, viewer discretion is advised.

"Welcome to the interwebs you stupid s***" was the final message on the website before a link to an unrelated news story. The site was scrubbed on Monday, then returned Tuesday morning before being replaced with a YouTube video on Wednesday.

As of Thursday, the Copper Stallion Media website is blank, but justinmontney.com returned to the content shown above.

Montney told KRDO Thursday he's considering legal action against Clark for what he perceives to be harassment.