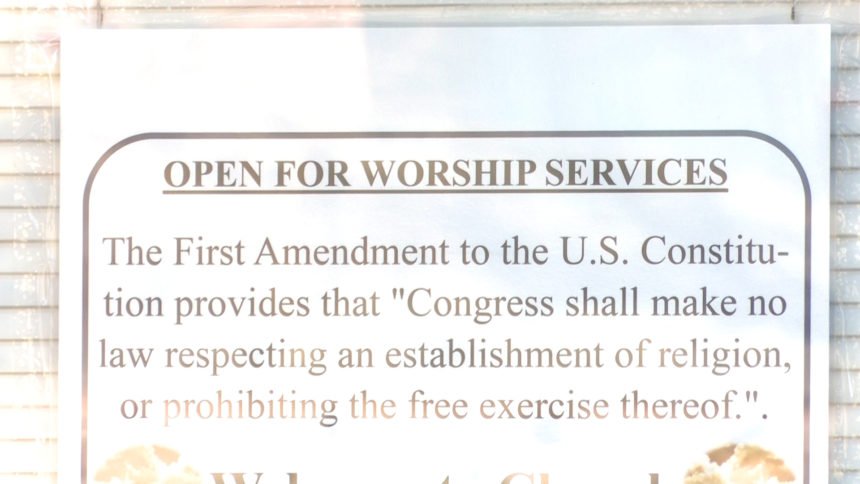 COLORADO SPRINGS, Colo. -- Leaders at a Colorado Springs church said that they had the Constitutionally protected right to keep their in-person services despite a public health order, but a legal expert says that argument may not have merit.

Colorado Springs Fellowship Church tells KRDO it is exercising its First Amendment right to worship and will continue holding services even though Gov. Jared Polis is banning gatherings of 10 or more people.

Lamont Banks, Vice President of the Board of Directors for the Colorado Springs Fellowship, said the church was informed that a complaint was filed with the El Paso County Health Department. However, Banks told KRDO on Wednesday that the church has no received a request from the health department to stop services of limit gatherings to less than 10.

KRDO asked the El Paso County Health Department about Colorado Springs Fellowship specifically, but all a spokesperson told us was that the order applies to all churches.

"If there ever was a time that churches should be open it should be now.
There should be a place of refuge, where people can go, and know that I
feel better when I went to church," Pastor Rose Banks told her congregation on March 22.

Banks' message to church members came four days after Polis' order banning gatherings of 10 or more went into effect. The order specifically mentions that faith-based events are not exempt.

KRDO spoke with Loew to get perspective on the legal argument of the church.

"In 1990, Justice Scalia of the Supreme Court, one of the most conservative justices that's ever been on the supreme court authored an opinion, saying that the state for specific purposes has the ability to regulate some church activities," said Loew.

That Supreme Court opinion was based on a case in Oregon. The opinion said that someone's religious belief does not excuse them from compliance with an otherwise valid law prohibiting conduct that the state is free to regulate.

Loew tells KRDO the Supreme Court could possibly have a different opinion if state government was solely trying to regulate Colorado Springs Fellowship and no other churches.

"It's not "ban religion." What it's saying is you cannot have 10 people or more in one specific place, and that's for everything," Loew said. "That's for sporting events, religious events, for concerts, for theatre, it's everything."

Loew believes church leaders will face consequences if they continue to violate the public health order.

"If the group does remains defiant, the El Paso County authorities almost have an obligation to go in and shut down this gathering," Loew explained.

The El Paso County Health Department told KRDO on Wednesday it is exploring the legal options at its disposal to enforce the order. According to the language in the order, those who do not follow it could face up to a year in jail and a $1,000 fine.