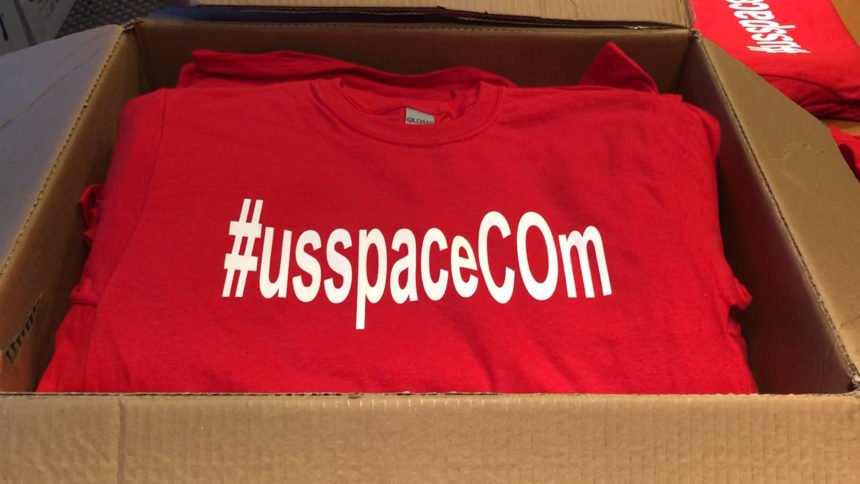 COLORADO SPRINGS, Colo. (KRDO) -- The temporary headquarters of U.S. Space Command is at Peterson Air Force Base. Now, the Colorado Springs Chamber of Commerce is working on a campaign to keep it here.

Three of Colorado Springs' Air Force bases are in the running to be the new home of U.S. Space Command. Colorado is competing with Buckley Air Force Base in Aurora and two other states.

Aerospace and defense make up more than 40 percent of the El Paso County economy, says Reggie Ash, the Chief Defense Development Officer with the Chamber of Commerce. If U.S. Space Command is headquartered permanently in the Pikes Peak Region, it would add 1,500 jobs and a military construction project approaching one billion dollars, says Ash.

That's why the Chamber of Commerce has started a statewide public relations campaign advocating Colorado Springs as the best location for its permanent establishment. The CoC ordered 5,000 red t-shirts with the hashtag #usspaceCOm.

"We have realized that it is critical for us to be influencing decision-makers inside the beltway of D.C. on this issue," Ash said. "Of course, the most important decision-maker is coming here on Thursday afternoon." Ash is referring to President Donald Trump, who will be holding a rally at the Broadmoor World Arena Thursday. Ash says they'll be handing out those red t-shirts to those entering the rally.

The CoC hopes the campaign will catch the eye of the president, inclining Trump to keep Space Command in Colorado Springs. Ash says that as of now, Colorado Springs is the least expensive option.

"Moving the headquarters would cost hundreds of millions of dollars and take years to rebuild that infrastructure," he said.

There is some anticipation that President Trump will make a surprise announcement Thursday that Space Command will stay in Colorado Springs. Ash hopes that's the case.

"We're getting into the game quick and we are going to continue to play it hard until he makes that decision."

The decision process has been lengthy. Since July of last year, Colorado Springs has been one of the final contenders. So why is the CoC starting this campaign now? Ash says they've been advocating on this since 2018, but this statewide campaign is the next step in raising awareness.

As of now, there is no timeline on when the military will announce the permanent headquarters of U.S. Space Command.