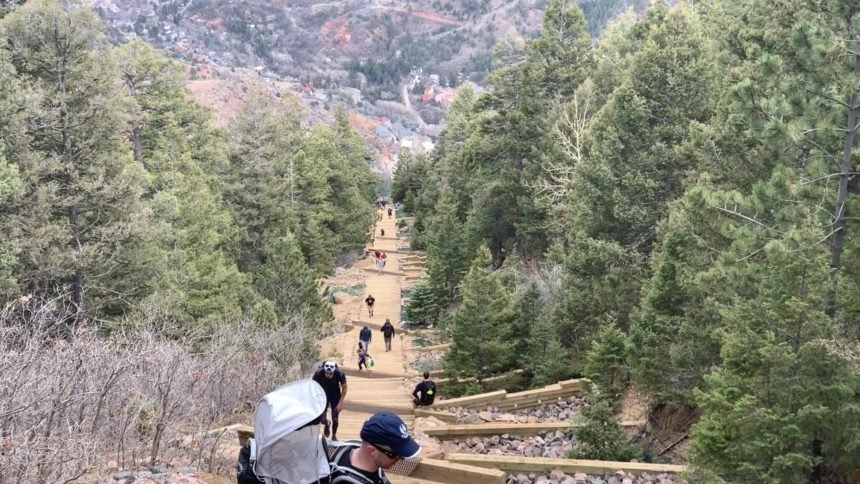 MANITOU SPRINGS, Colo. (KRDO) -- With no reopening date in sight for the Manitou Incline, hikers say they're organizing a demonstration Saturday to climb the 2,744 steps in protest of the trail's closure.

The Incline has been closed since mid-March due to COVID-19 concerns -- the city of Manitou Springs says it's working on a plan for hikers to access the famously steep trail at a staggered rate to ensure social distancing.

But no plan has been officially adopted yet, and members of the social media group Everything's Better on the Incline say they'll be climbing the steps Saturday morning as a protest. It starts at 7 a.m.

"I ask that this demonstration be accomplished with kindness and respect to other incliners and especially to the local neighborhoods," Mark Rickman said in a post on the social media group. The thread attracted dozens of pledged attendees.

"All the other trails in the area are open," he said. "Last weekend, we decided to do something about it. I'm asking people to arrive early or have someone drop them off because parking will be limited and police will be enforcing parking rules."

Rickman says the protest will adhere to social distancing guidelines, and he encouraged demonstrators to wear protective gear.

Several hikers said Thursday that they plan to attend the Incline demonstration.

"It just doesn't make sense for it to be closed," one hiker said.

Another hiker, from Albuquerque, disappointed that the Incline is closed, decided to climb it anyway.

"I've never done it before," she said. "It's on my bucket list. I'm here temporarily because they need nurses for the pandemic, so this may be the last chance I have to try it out."

Manitou Springs Mayor John Graham said that because the group is embracing the health guidelines and isn't an antagonistic organization, he doesn't expect a strict response from the city's police department -- even despite the warning of a maximum penalty of a $2,650 fine or 90 days in jail for trespassing.

"The Incline is closed for health concerns, so certainly that hasn't changed. I've seen the posts on social media, and they are advocating for things like social distancing, masks, and picking up litter, even," Graham said.

Graham's thoughts are that the protesters are keeping with the spirit of why the Incline was closed in the first place.

When asked if he was concerned about the protest climb inspiring other hikers to take on the trail before reopening, Graham said the city has largely relied on voluntary compliance so far, anyway.

"By and large, that's what's worked very well. When we compared this year versus previous closures, we've achieved about 93% compliance," Graham said. Although he did mention one incident early in the Incline's closure when a "cantankerous" man who wanted to climb the Incline caused a disturbance when he pulled out a gun.

Council members have been working with the city of Colorado Springs to develop a plan that would enact reservations for the Incline, and it would limit hikers to about 90 per hour. Graham said they're trying to come up with "a balanced solution that's good for as many people as possible," but he also acknowledged that an Incline management plan was in the works even before the coronavirus. The property itself is currently under a combination of Manitou Springs, Colorado Springs, and US Forest Service control.

"I think we're getting closer [to a final plan], we'd like to have the latitude to continue working," Graham said. "I don't really see the point in fighting or being antagonistic, whether its the organizers of this protest or leaders in other jurisdictions."

"The Incline was closed by the Manitou Springs City Council in March through an emergency order related to COVID-19. Last week, we presented what we and the Incline’s other owners (Colorado Springs Utilities and the USDA Forest Service), as well as several community groups, agree is a fair proposal to reopen the Incline with public health modifications that are above and beyond what is required by our state and local health departments. We were hopeful heading into the presentation that our proposal would be well received, as it is very similar to a plan that the Manitou council supported two weeks ago when presented by Manitou city staff. The main difference in our proposal is that we, the entity with sole management responsibility for the property as outlined in the 2011 Site Development and Management Plan, would run the reservation system, and it would be free. However, following our presentation to Manitou’s council on June 11, it became very clear that the council’s concerns for reopening the Incline go well beyond the reasons given at the time of the emergency closure.

"As a property owner, our short-term goal remains the same. We want to reopen the Incline as quickly as possible with public health modifications in place. We have been very clear that longer-term solutions for concerns not immediately related to the current public health situation require a separate discussion and public process. We look forward to continuing to actively engage in further discussion with Manitou regarding next steps."