Overview:  The heaviest snow will wind down over the ski resorts in northern and central Colorado today as the next wave shifts the focus for snow to the south and east.  Snow is likely to fall over the Front Range and the adjacent plains starting Sunday with areas of slick travel expected into Monday morning. The workweek will start out chilly with a slow warming trend through the week.

Today:  Becoming cloudy with accumulating snow falling mainly over the southern I-25 corridor this morning and then expanding northward over the Pikes Peak Region this afternoon. The snow could start out a little wet for some areas, but as the air cools late it'll be more likely to accumulate on roadways. We expect that the heaviest snow with this storm will likely fall over and near the mountains from Fremont County southward to near the New Mexico state line today with difficult travel conditions likely. Many areas farther north will receive less snow through the day, but by late afternoon it appears likely that more areas will begin to receive enough snow to slow travel. The air won't warm very much with high temperatures only in the 20s and 30s area-wide.

Tonight:  Periods of snow will continue to fall through the night with the heaviest snow likely continuing to fall over and near the southern mountains where many areas will receive at least 8” to 12” of snow by Monday morning with some pockets near the mountains likely receiving well over a foot. Snowfall accumulations for our major populations centers along and north of the Arkansas River will likely be much lighter, but both Colorado Springs and Pueblo proper should receive 1” to 4” of snow although neighborhoods south of the Arkansas River in Pueblo could receive a bit more, Canon City should receive 3” to 6” with heavier amounts over the mountains south of town, and Teller County should receive anywhere from about 2” to 5” with the heavier amounts most likely for southern parts of the county.  We’ll remain quite chilly so even light accumulations of snow will result in slick travel for Monday morning commuters. By morning temperatures will have fallen into the teens for many areas.

Extended:  The storm will move out of the area early on Monday but we'll remain cold, and a pool of cold air aloft may allow for some lingering clouds and a few flurries or light snow showers into the afternoon, especially over and near the mountains. Tuesday will be mostly sunny but chilly with high temperatures in the 20s and 30s and low temperatures mainly in the single digits.  We should warm a bit Wednesday although it's likely we'll have more clouds around as well.  A weak system could kick up the wind and bring a little snow to mainly mountain areas on Thursday, but it's possible that scattered snow showers could also develop along the I-25 corridor.  We expect some wave clouds Friday and Saturday, but the air should start to warm up again. 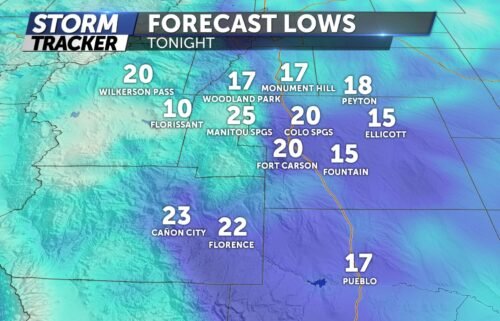