Tonight: Patchy fog is already being experienced above 6500ft, so northern El Paso County and southern Douglas County could run into visibility issues till approximately 6am tomorrow morning when we finally warm up a few degrees. The first round of snowfall in central/southern Colorado will occur overnight tonight and into tomorrow morning across the eastern plains. Expect snow accumulation totals to be relatively minimal along the I-25 corridor, but it's possible some areas in Pueblo County see an inch by early Monday morning. Wet and lightly snow-covered roads are likely in El Paso County.

Monday: Mostly cloudy skies are expected through the day with on and off snow flurries for most locations. High temperatures only reaching about 36 degrees in Colorado Springs and 40 in Pueblo. After 4pm is when moderate to brief periods of heavy snowfall are possible in Colorado Springs as we could pick up a quick inch of accumulation between 4pm and 8pm. Light snowfall will continue into the overnight hours into Tuesday morning.

Extended: Snow showers lingering for many areas through the morning and early afternoon as this is when most areas will see the majority of their snow accumulation. Colorado Springs and Pueblo can expect about 1-3in during this event with heavier snowfall expected in the Sangre's, Wet's, Rampart's and Front Ranges. Entering into a clearing trend by Wednesday with high temperatures back into the 40s and 50s by our late week forecast. 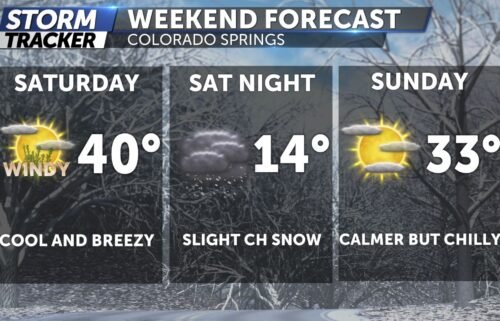