A low-pressure system will bring snow to the I-25 corridor for Monday afternoon into Tuesday, with clearing conditions by Wednesday. Here's a quick snowfall accumulation forecast for the entire event, followed by details.

Tonight: Mostly cloudy skies for many Coloradoans as the winter weather won't make its arrival into Colorado Springs till mid-morning. It's possible HWY 50 in eastern Colorado will see brief rain/snow showers shortly after midnight, making for wet roads/icy roads during the morning drive. Low temperatures to 19 degrees in Colorado Springs and 22 in Pueblo.

Monday: Snow flurries will begin after 6am in El Paso County with minimal accumulation expected during the morning hours. High temperatures not warming up much through the day, only reaching 31 degrees for Colorado Springs and 35 in Pueblo. During the afternoon southeasterly winds will increase with gusts to 35mph, promoting moderate to even periods of brief heavy snowfall in the Colorado Springs area overnight into Tuesday. So this is the time when most of the snow accumulation will occur in our area.

Extended: On and off snow showers on Tuesday as the low-pressure center moves east of Colorado by late afternoon. That will in turn shift winds to northerly with gusts to 35mph, but additional snow accumulation Tuesday night isn't expected. 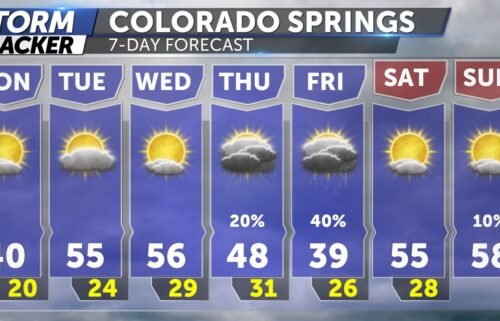