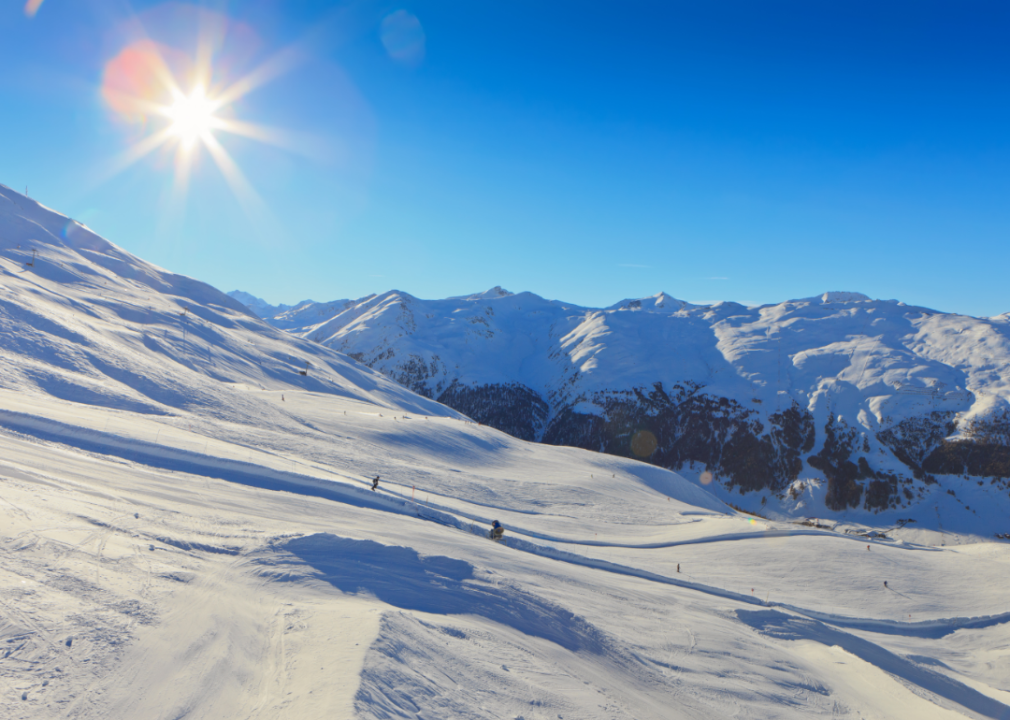 States with the most ski resorts

Skis naturally evolved from snowshoes a couple of thousand years ago throughout much of the world. But this winter weather footgear didn’t arrive in North America until Russian trappers brought them to Alaska as a means of transport. Fast forward to today, when skiing has  evolved into one of the world’s most popular winter recreational sports with an estimated 51 million ski visits annually in the U.S.

Many states saw their first ski resorts opening their doors in the early part of the 20th century, and saw the popularity of skiing explode through the ’50s and ’60s due to the introduction of chairlifts and the metal ski. Today, there are now 470 ski resorts in operation across the country, ranging from cozy and rustic to luxury getaways offering mountain concierge services. While the popularity of skiing has been well-established around the world, one of the biggest threats to the sport is climate change. A study published in Nature in November 2021 suggests a “low-to-no snow future” for western states in 35 to 60 years if greenhouse gas emissions continue at current levels, putting into question the future of where ski resorts can continue to operate.

Looking at the number of resorts currently open for business, Curated used data compiled by the National Ski Areas Association, a U.S. trade association for ski area owners and operators, to rank states based on their number of alpine ski areas. Each state also includes the oldest and newest ski resort. If more than one state is tied for the number of ski areas, the states are ranked the same and the numbering continues.

Keep reading to find out which states have the most alpine ski resorts and discover the history and facts behind some of these famous and beloved locations. 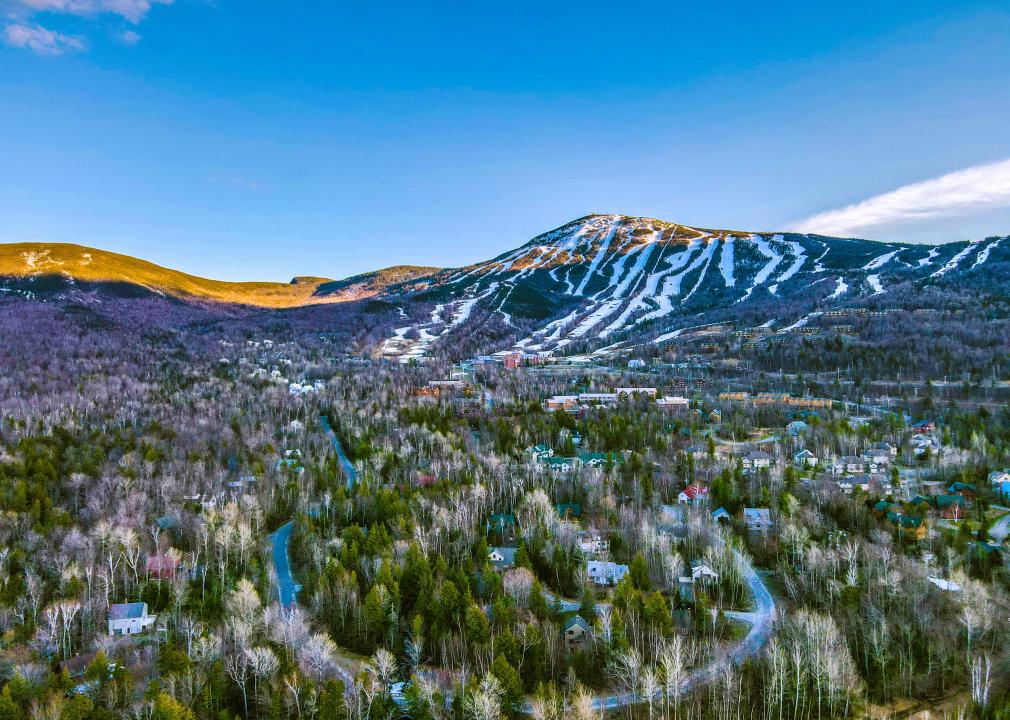 Members of the Civilian Conservation Corps cut numerous ski trails during the Great Depression including Mt. Megunticook’s Slope Trail. At least four of the state’s mountains were etched with trails by the CCC—some survive to this day while most others were relocated or lost to erosion and time. Shawnee Peak, Maine’s oldest ski resort, opened in 1938 in Bridgton, with trails that had been formed by the CCC and the Works Progress Administration. Originally called Pleasant Mountain for the mountain it stands upon, the resort was renamed Shawnee Peak in 1988 to match the name of the then-owner’s other ski area in Pennsylvania.

With a ski season that lasts into late April, Maine remains a popular destination for ski enthusiasts looking to make the most of spring powder. 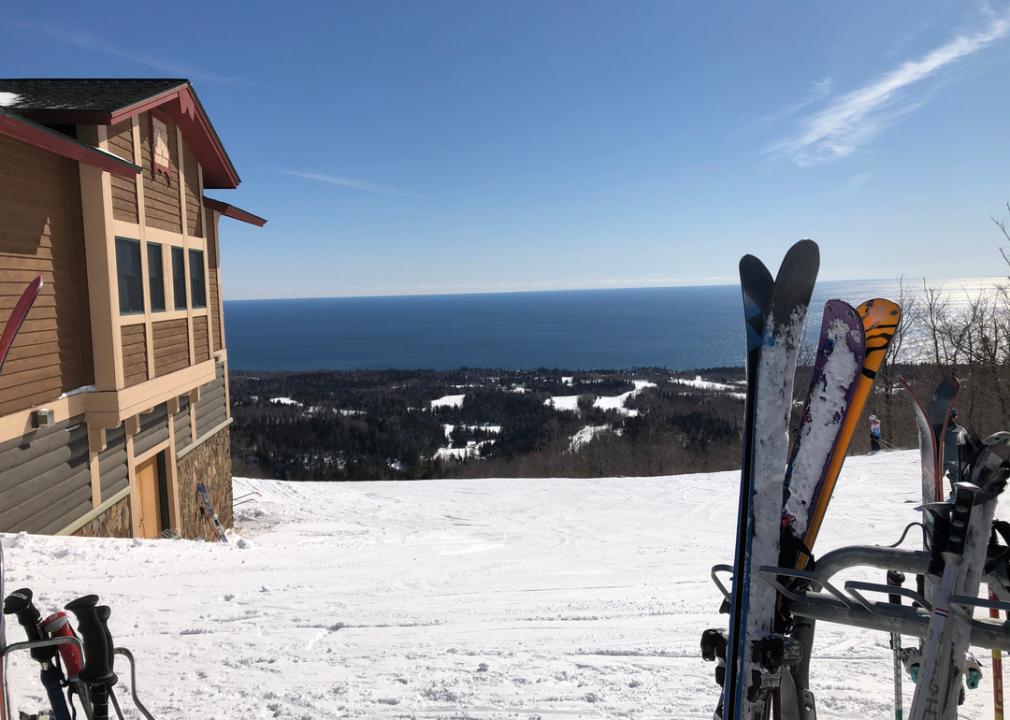 Skiing took hold in Minnesota earlier than in most other states due to its high volume of Scandinavian immigration between 1850 and 1930. In 1879, Norwegian immigrant Martin Strand opened Strand Ski Company, the first American ski factory, in St. Paul. In 1932, Minnesota became the first state to make skiing an official high-school sport.

Lutsen Mountains, the state’s oldest ski resort, opened atop what later became the biggest ski area in the Midwest. The resort started as a family home with rooms rented out to new settlers. Following World War II, the inn was transformed into a four-season resort with a ski lift and two runs added in 1948.

Climate change is rapidly affecting Minnesota’s ski areas, as the upper Midwest U.S. is warming more rapidly than any other region in the country. The state’s winters are, on average, 7 degrees warmer than 50 years ago, which has caused havoc on slopes throughout the state. Buck Hill constructed an artificial, 4-acre ski slope of malleable plastic to stretch the ski season and even offer skiing in the summer months. Legislators throughout the state have also discussed “Snow Angel” grants to help ski areas adapt to the warming winters. 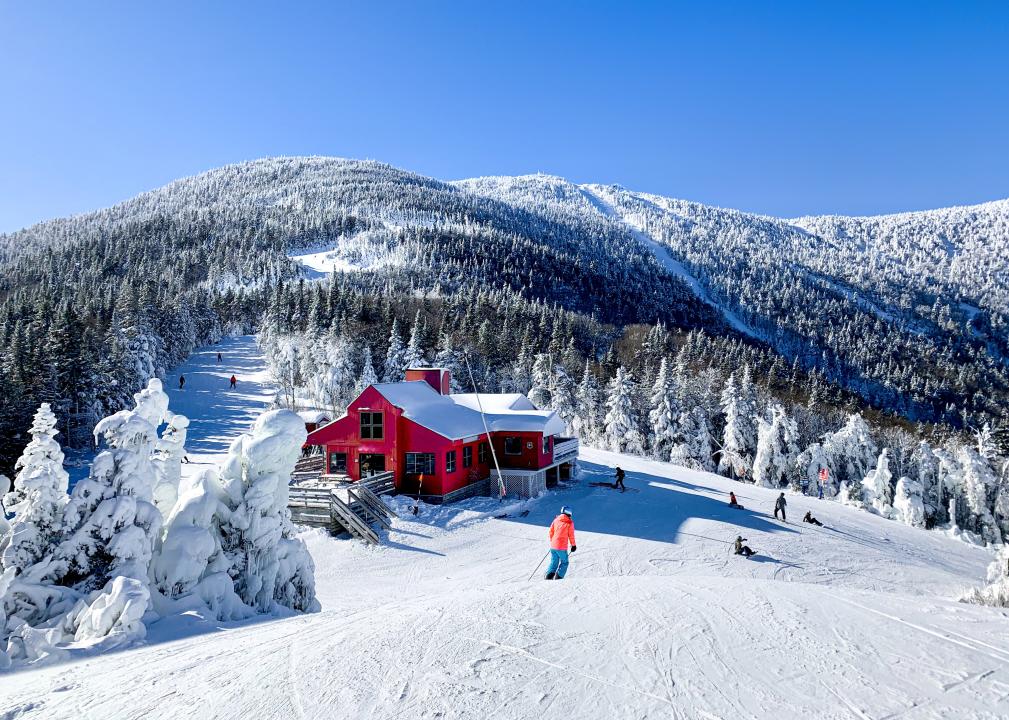 Civilian Conservation Corps access roads into Sugarbush and Mad River Glen, along with ski trails cut throughout the state, helped Vermont quickly rise to the top of the leisure-ski food chain in the first part of the 20th century. The state’s naturally cool climate, proximity to some of the country’s highest-population centers, and plethora of snowfall made it a natural choice for early ski bunnies. The draw of its slopes speaks for itself: Vermont’s ski industry is worth $1.6 billion, adding a big boost to the state’s economy, which, at $35 billion, is the smallest in the country. 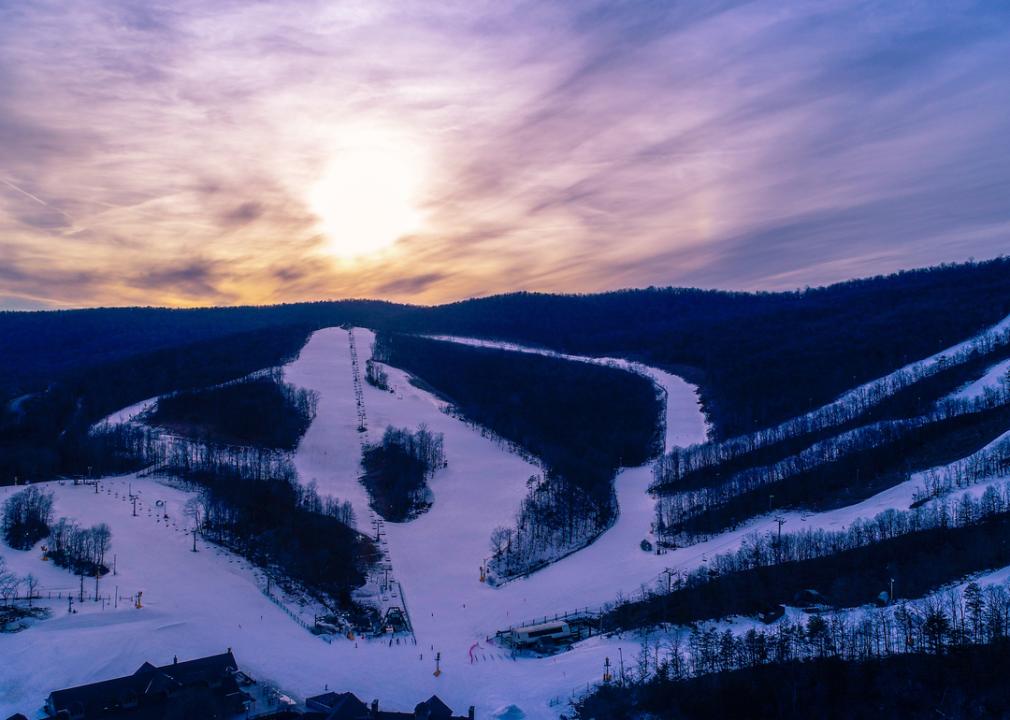 Pennsylvania’s tallest peak is atop Mt. Davis at 3,213 feet, a little more than half a mile high. But despite its stature, the state’s wide variety of slopes and ski areas attract visitors from all over the country.

The Poconos—which gained notoriety following World War II as a popular destination for returning GIs and their brides—capitalized on increasing access to the region. This was thanks to Eisenhower’s Interstate Highway Initiative in the 1950s that birthed the I-80 corridor, which delivered cross-country access to the resorts there.

Big Boulder, the state’s first commercial ski area, opened its doors in 1946. A decade later, the location had its own, patented snowmaking machine for commercial use that extended the season. 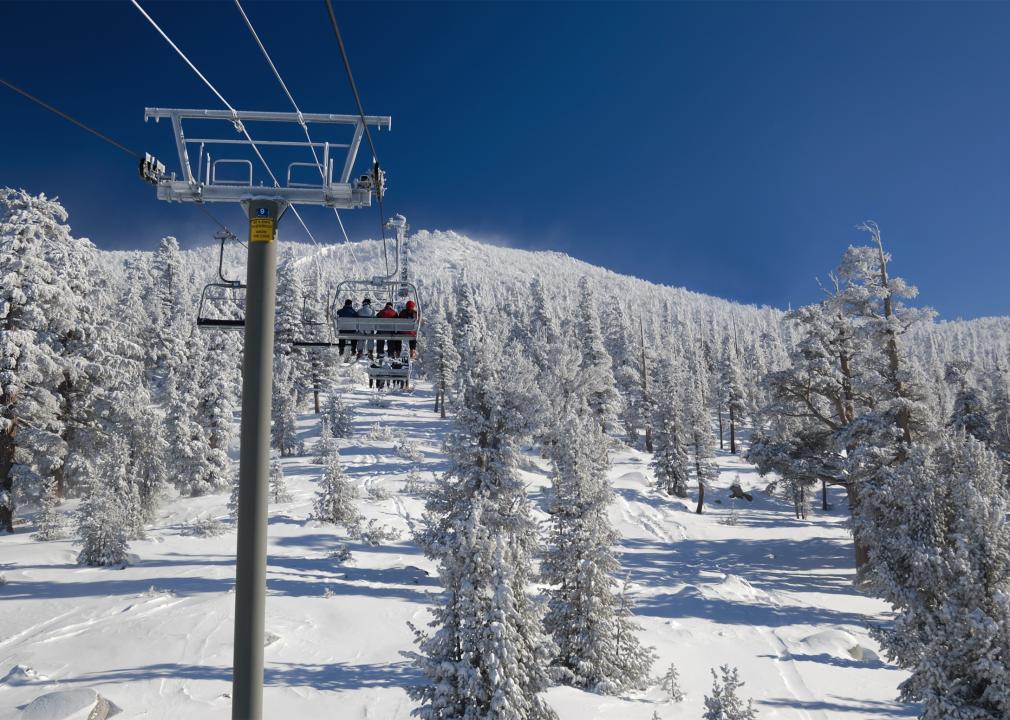 The California Gold Rush in the mid-19th century attracted Norwegian sailors who taught skiing to people stuck wintering in mining camps. The oldest still-operating ski resort in the state, Mountain High, opened its doors in 1924 to a growing number of ski bums outside of Los Angeles. By 1929, the resort’s ​​ski jump was a focal point for winter events and competitions.

Wildfires have been a major impediment to ski operators in California, barely sparing Mountain High in 2009 but causing major damage to other ski areas throughout the state. The Caldor Fire, which burned more than 221,000 acres within the Sierra Nevada mountains between Aug. 4 and Oct. 21, 2021, destroyed around 80% of the slope vegetation at the Sierra-at-Tahoe ski resort in Twin Bridges. As of February 2022, that resort was still trying to figure out a way to reopen for the tail end of the 2022 season. It serves as a sobering harbinger of what ski areas throughout the West may contend with in coming years, from canceled trips and park closures due to smoke and fire to damaged slopes, lifts, and resorts. 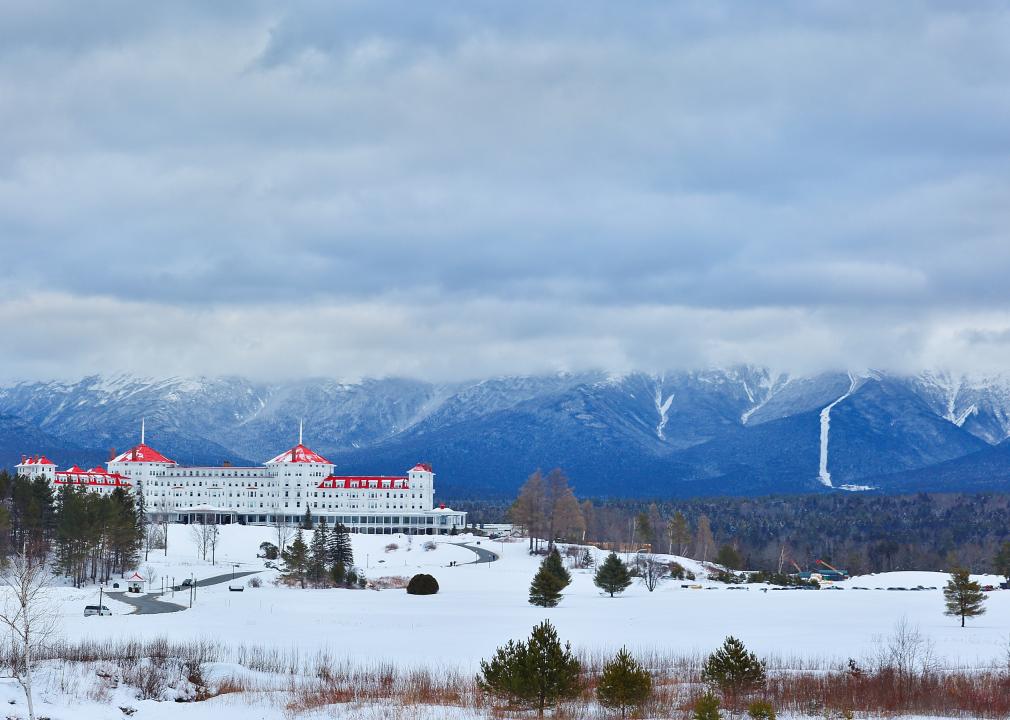 New Hampshire was at the epicenter of skiing’s exploding popularity in the first half of the 20th century, with close proximity to Boston, where the population had a growing infatuation with the sport. Added to this were Scandinavian workers well-versed in skiing who were working in paper mills around Berlin, New Hampshire, and nearly 75% of Dartmouth College students who partook in the Dartmouth Outing Club throughout the 1920s.

The state is home to the longest-continuously operating American ski club: the Nansen Ski Club, formed in 1882. The area also has a few other notable firsts: The first resort ski school in the U.S opened in 1929 near Peckett’s-on-Sugar Hill and the first “ski train” in the U.S. ran between Warner, New Hampshire, and Boston (commencing in 1929).

In the midst of all these firsts, the Storrs Hill Ski Area (the state’s oldest continuously operating ski resort) opened its doors in 1923. The resort may represent the longest-continuously operating, lift-served ski area in the U.S., with its first lift installed in 1935. 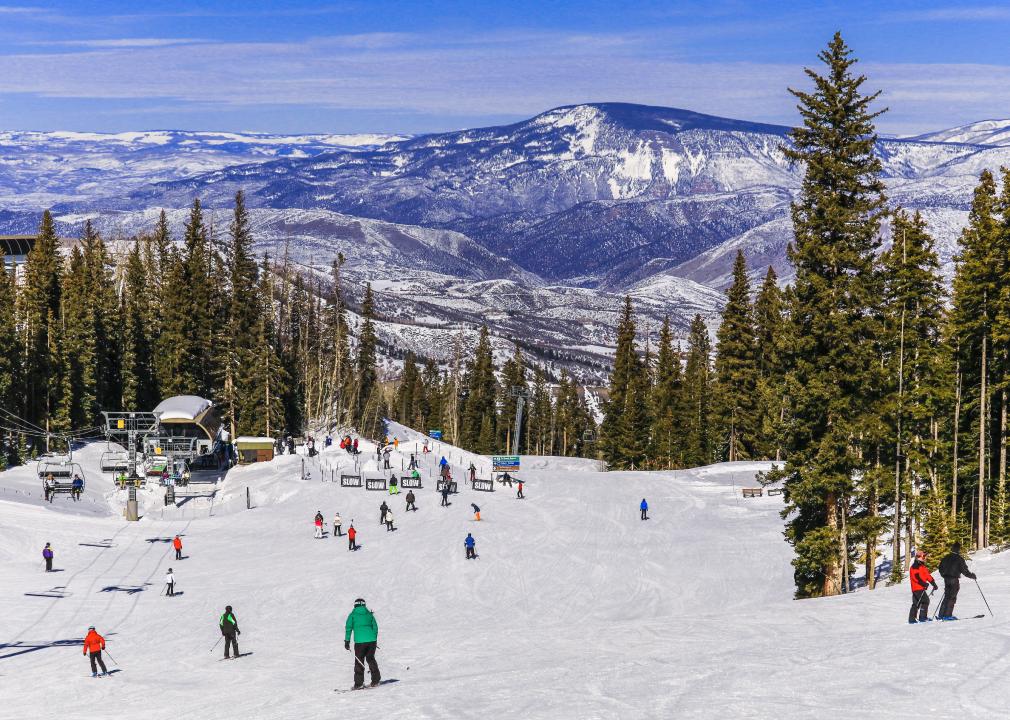 Pre-pandemic, Colorado saw nearly 14 million visitors flocking to its slopes, a record for the state which is home to famed destinations like Aspen, Telluride, and Vail. Skiing most likely reached Colorado in the early 1800s, decades before the territory became a state in 1876. A far cry from the ski bunnies and resorts of today, early skiers in the area were miners who used skis to traverse snowy cover in high elevations during winter months.

Howelsen Hill, the oldest operating ski area in Colorado and North America, has sent more athletes to the Olympics—around 90—than any other American ski area. 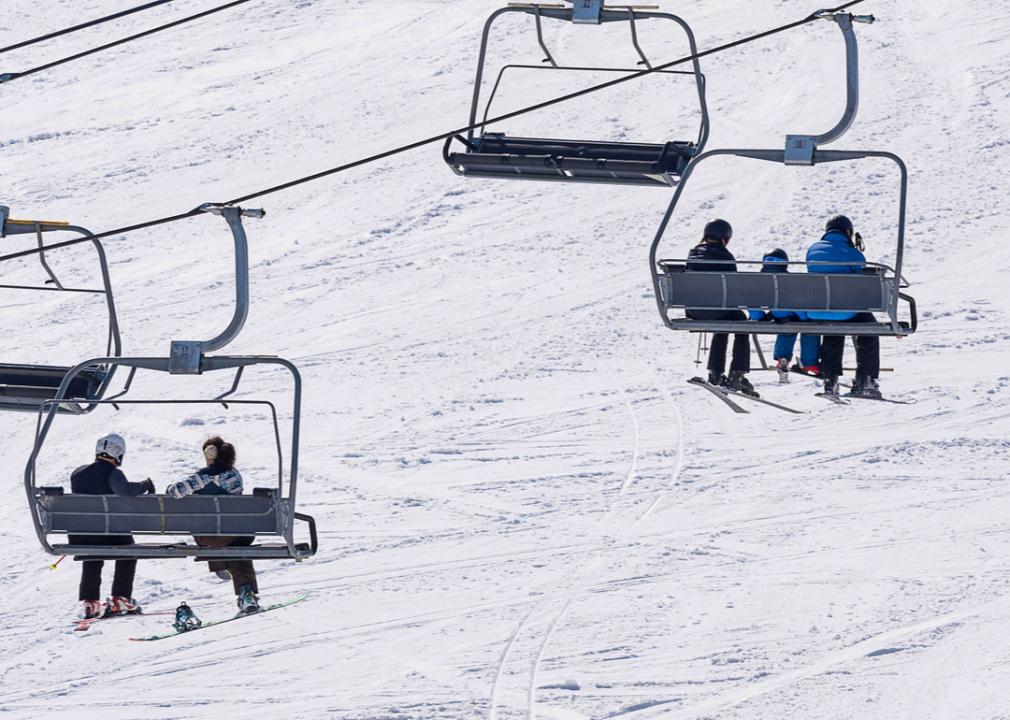 Wisconsin’s cold, snowy winters make it a popular location for winter sports, although its highest natural point is just 1,951.5 feet. Its highest skiable terrain is at Granite Peak in western Wisconsin, which has a 700-foot vertical drop, 74 runs, and six terrain parks.

The state’s oldest resort, Heiliger Huegel Ski Club, is a members-only resort with a 200-foot vertical and 20 skiable acres. Back when it opened, there were no lifts—skiers had to herringbone their way up the hills before skiing down. 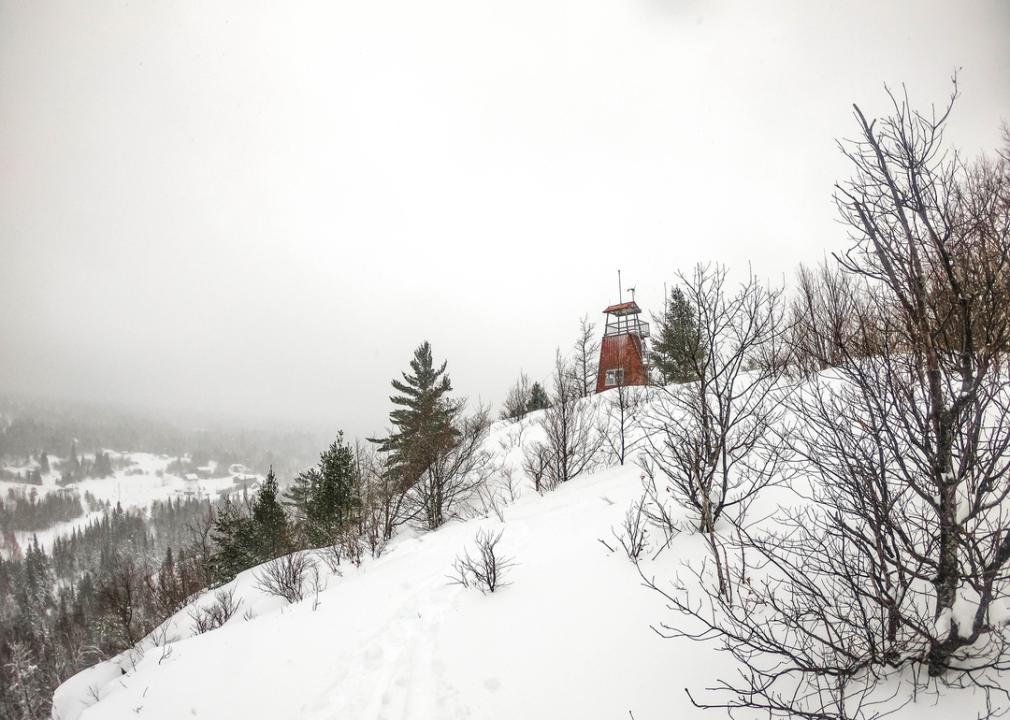 The first destination ski resort in the state was Caberfae Peaks, which opened in 1938. But the oldest ski area in the state is Mont Ripley, owned by Michigan Technological University, which is nestled into what is known to be the snowiest part of the Midwest: the Keweenaw Peninsula. 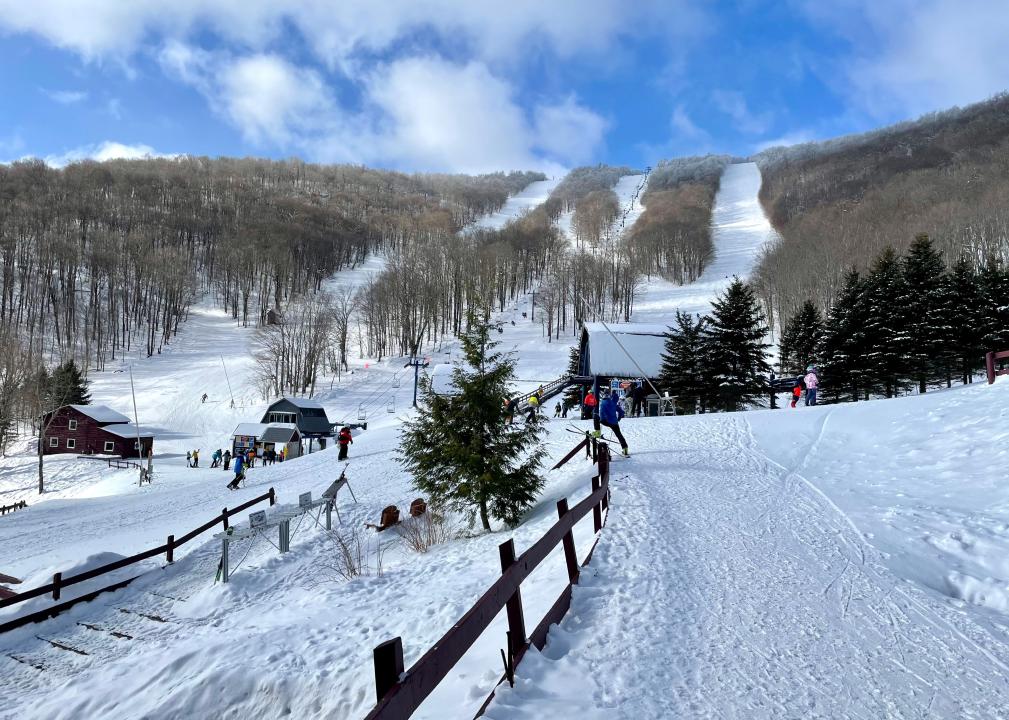 The best skiing in New York can be found in the Adirondack Mountains, covering the Northeastern part of the state for about 5,000 square miles with peaks around a mile high. The Adirondack town of Lake Placid in 1932 hosted the third Winter Olympics. The first paid instructor in an American ski school, Henrik Jacobsen, was hired at the Lake Placid Club in 1920.

The present-day Gore Mountain, about 70 miles south of Placid in the southern Adirondacks, is actually known as “New Gore,” since it opened in 1964. The “Old Gore” nickname goes to the North Creek Ski Bowl, which opened its doors to skiers in 1934 and stands as the oldest resort in New York.

This story originally appeared on Curated
and was produced and distributed in partnership with Stacker Studio.