Oath Keepers leader Stewart Rhodes has spewed violent rhetoric and whipped up unsubstantiated fears about secret government plots and imminent civil war for more than a decade with the help of another purveyor of extremism: conspiracy monger and internet powerhouse Alex Jones.

Jones, who has built a staggering online following around his Infowars empire, has given Rhodes a platform to reach a wider audience — from the day Rhodes plugged the Oath Keepers’ first public meeting to the weeks surrounding the invasion of the US Capitol.

At the same time, Rhodes’ Oath Keepers protected Jones at multiple “Stop the Steal” rallies. The heady mix of access and influence came to a boil on January 6, 2021, with the Oath Keepers tasked with providing a personal security detail for Jones and Stop the Steal organizer Ali Alexander before the pro-Trump rally culminated with the deadly riot at the Capitol.

Rhodes, who prosecutors charged with seditious conspiracy related to that attack, previously served the nation as an Army paratrooper and a staffer for former Rep. Ron Paul of Texas. But in 2009, Rhodes launched the anti-government Oath Keepers — who dubbed themselves “Guardians of the Republic” — and began to rachet up his inflammatory rhetoric of impending war.

Since his organization’s founding, Rhodes has appeared dozens of times on Jones’ Infowars platform, which began in the 1990s as a small-time operation in Austin, Texas, and morphed into an international spreader of conspiracy theories that now receives about 10 million visits a month on its website, according to data from Similarweb.

In 2012, Rhodes appeared on Jones’ show and drew a comparison to the American Revolution during a conversation about alleged government abuse of power. “Just the same as the founders did, they exhausted all their peaceful means, but they also rallied more people to the cause, won more people over and steeled them up and hardened them, got them ready for the confrontation. That’s what we have to do,” Rhodes said.

In the same segment, Jones said the current government was “totally illegitimate and has been caught committing so many crimes it’s dizzying.”

The following year, Rhodes appeared on Infowars in a segment about supposed widespread firearm bans. “Almost every gun owner I spoke to is very concerned that this is for all the marbles and we’re heading for a civil war,” Rhodes said.

Jones agreed with Rhodes, saying, “The line in the sand like the Alamo has been drawn.” “These tyrants just do not get it, do they?” Jones asked Rhodes at the end of the segment. “No, they don’t, unless they really want a civil war.”

Jones’ and Rhodes’ shared belief in a so-called “New World Order” that seeks to disarm and enslave Americans has enabled them to benefit each other, said Mark Pitcavage, a historian and extremism researcher with the Anti-Defamation League.

Pitcavage said Jones has provided Rhodes with a credulous audience, while Rhodes has supplied him with conspiratorial rants to fill his programs. But, he said, the danger of their ideology was demonstrated on January 6, which he described as “a logical path that is not inconsistent with their previous viewpoints.”

In 2016, Rhodes told Jones he thought the Democratic and Republican parties were one and the same and that they would rig the election against candidates like Sen. Bernie Sanders and Donald Trump. Jones said Rhodes had been “proven right” in his predictions about imminent tyranny. “I mean really, seriously, you need to get ready for full occupation, people coming to dig you out and full-on war,” Jones said.

As Trump ramped up his bid for reelection, Rhodes started to fan the flames of what could come if he lost, making frequent mention of a “civil war.” In July 2019, Rhodes told Jones on Infowars that if Trump were not reelected “we won’t accept the results” and will have “no choice but to fight.”

He boasted that his group had veterans who were well trained. “If this kicks off into a civil war, a bloody one, they will instantly go to work and take it to the left,” he said.

While Jones gave Rhodes a platform for his extremist message, Rhodes’ Oath Keepers, in, turn provided security for Jones at Stop the Steal rallies.

On November 10, 2020, Rhodes said on Infowars that he would protect Jones’ team that was coming to a protest in Washington that weekend. Another Oath Keeper who has been charged in the indictment with Rhodes, Roberto Minuta, was photographed next to Jones the day of that protest.

An attorney for Rhodes, Jonathon Moseley, told CNN the Oath Keepers had been tasked with providing security for a group of “VIPs,” including Jones, at the January 5 and 6 Stop the Steal rallies, but the indictment filed this week paints a dramatically different picture.

“They coordinated travel across the country to enter Washington, D.C., equipped themselves with a variety of weapons, donned combat and tactical gear, and were prepared to answer Rhodes’s call to take up arms at Rhodes’s direction.”

Rhodes had posted an alert bulletin to all Oath Keepers for January 6 that said: “All Patriots who can get to DC need to be in DC!” “stand now, or kneel forever.”

And from across the country they came — armed, in battle fatigues and with radios to communicate.

In the days leading up to January 6, Rhodes and his co-conspirators also amassed an impressive arsenal of weapons and tactical gear, according to prosecutors, who say that the Oath Keepers leader spent thousands of dollars on firearms and related equipment ahead of the operation.

On January 6 itself, Oath Keepers climbed the Capitol steps in military stacks, entered the building and celebrated once inside.

Rhodes denies ever entering the Capitol building. Still, prosecutors say he “entered the restricted area of the Capitol grounds and directed his followers to meet him at the Capitol.”

In March, two months after the riot, Rhodes appeared on Infowars again and called the notion that Oath Keepers were involved in a conspiracy to assault the Capitol “complete bunk.” He then launched into another tirade in which he said he hoped the government outright banned assault weapons: “That way Americans will finally rise up.”

Rhodes made his first appearance in court Friday for the seditious conspiracy charge. He has previously denied wrongdoing. 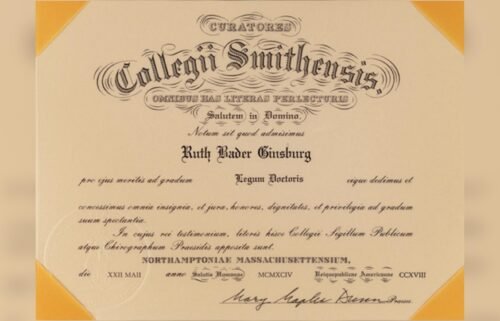