Following President Donald Trump’s announcement on Sunday that ISIS leader Abu Bakr al-Baghdadi died during a US military raid in northwest Syria, a number of Democrats hoping to unseat him welcomed the news and congratulated US troops, but were mum on Trump’s involvement in the risky operation.

In a statement, former Vice President Joe Biden congratulated “our special forces, our intelligence community, and all our brave military professionals on delivering justice” to Baghdadi. Author Marianne Williamson offered in a tweet “Praise and thanks for the military bravery and brilliance that carried out the mission,” and former Maryland Rep. John Delaney wrote on Twitter that he’s “grateful for the brave patriots who risked their lives to advance our safety and security.”

With Trump and Republicans likely to characterize the mission as a defining moment of his presidency ahead of next year’s election, the lack of attention placed on his role in the operation could provide insight into how the field of candidates plan to discuss the news in the coming weeks and months.

Trump announced at the White House earlier Sunday that Baghdadi killed himself on Saturday during a US special operations forces mission that went after the ISIS leader. The President told reporters Baghdadi was under surveillance for a couple of weeks and that two to three planned missions were scrapped before the successful one was launched. Defense Secretary Mark Esper said Sunday that Trump approved the raid “late last week” after being presented with different options.

In a Sunday tweet, entrepreneur Andrew Yang congratulated “the special ops team that executed the mission and everyone in the chain of command,” though there was no mention of Trump, who as commander-in-chief is at the top of the Pentagon’s chain of command. Similarly, South Bend, Indiana, Mayor Pete Buttigieg, a veteran of the war in Afghanistan, told CNN that “everybody involved deserves credit, but those who were at the tip of the spear deserve the most credit.” Buttigieg also did not refer to Trump’s involvement.

Massachusetts Sen. Elizabeth Warren, on the other hand, expressed in a tweet gratitude for “the skill and courage of our special operations and intelligence professionals.” But it was former Housing and Urban Development Secretary Julián Castro who took direct aim at the President in the wake of the news, saying it’s “ironic” that Trump, who is known for publicly sparring with his intelligence community, “is trying to take credit when he routinely attacks our intelligence agencies who help make the demise of al-Baghdadi possible.”

Vermont Sen. Bernie Sanders also weighed in on the news, saying in a tweet that the “fight against ISIS would not be possible without the brave efforts of the Kurds and other U.S. allies.”

And California Sen. Kamala Harris told CNN on Sunday that the credit “goes to the men and women who have been doing the work every day.” Trump, Harris said, has lost credibility when it comes to his relationship with the intelligence community. 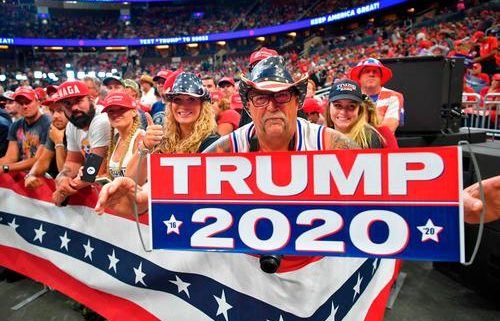