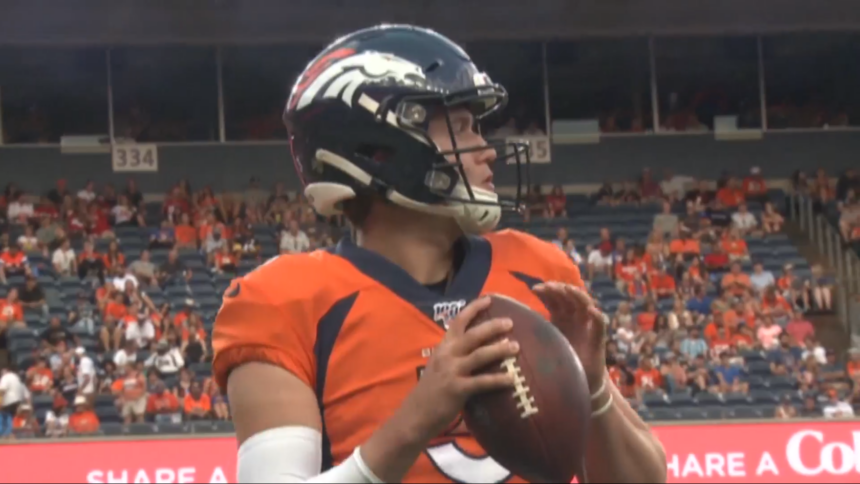 ENGLEWOOD, Colo. (AP) - Denver Broncos No. 3 quarterback Jeff Driskel was placed on the COVID-19 list Thursday but contact tracing showed starter Drew Lock and the Broncos’ other QBs weren’t in danger of being infected by the coronavirus.

“They have determined that nobody else has to go on the list,” coach Vic Fangio said.

It’s not known if Driskel was placed on the COVID-19 list for a virus infection or for being in close contact with an infected individual.

Fangio said he wasn’t worried about his other QBs' health because the contact tracing devices that everyone has to wear at team headquarters cleared them.

“No, the other quarterbacks were only on there minimal amounts, like two minutes and some seconds, four minutes. That’s over a three- or four-day period,” Fangio said. “They thoroughly checked those guys … and they came back and said nobody else needs to go on the list and they cleared us to have normal activities and normal practice today.”

On Wednesday, safety Kareem Jackson said Driskel was mimicking New Orleans dual-threat quarterback Taysom Hill on the scout team. Driskel's absence made it harder to prepare for Hill, who will lead the Saints (8-2) into Denver on Sunday to face the Broncos (4-6).

“It’s difficult because, first off the guy runs real fast, he’s about a 4.4 guy, and obviously he runs their offense and the particular things that are specific to Hill very well,” Fangio said. “Our guys are trying to (mimic) them on a scout team. So, it’s not quite as good, but Jeff is athletic. We will have ‘Ryp’ and Bortles do it today.”

Driskel is the fifth Broncos player placed on the COVID-19 list this season. Defensive end Shelby Harris is expected to miss his fourth consecutive game this weekend and defensive coordinator Ed Donatell continues recovering from a serious case of the coronavirus that landed him in the hospital and has sidelined him all month.

Also, the Broncos have had three coaches and two executives, John Elway and Joe Ellis, test positive for the virus in addition to Jackson and Von Miller, who were infected in the offseason.

Fangio said on this holiday he’s thankful the NFL has been able to play through the pandemic thanks to mitigation efforts.

“I am. I mean, I had my doubts in July before training camp started, but I am thankful it’s gotten to this point. I think we’ll get to the finish line,” Fangio said. “I’m thankful that the guys that have gotten the virus within our organization have (recovered). I’m thankful that Ed Donatell is on his road to recovery and doing better. And I’m just thankful for being the teammate with these players on this team.”