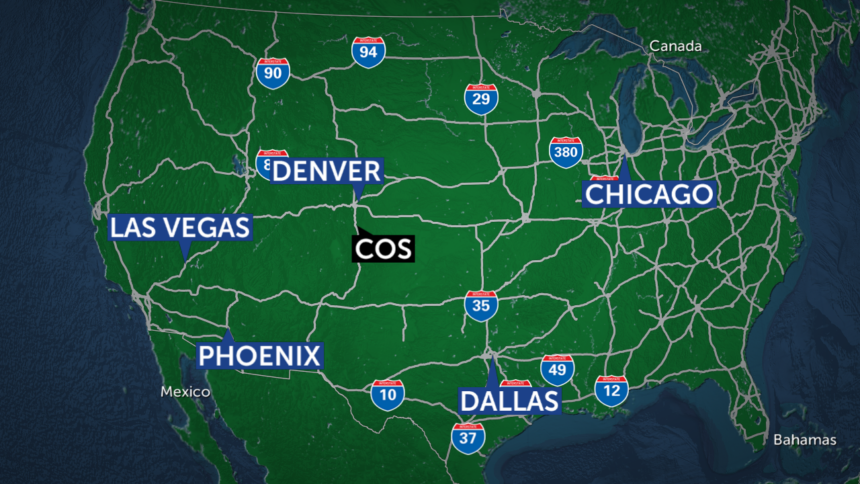 COLORADO SPRINGS, Colo. (KRDO) -- Southwest Airlines announced last week that it'll expand into Colorado Springs and now we know where the flights will be going when the service starts.

According to Southwest, nonstop flights will go between Colorado Springs and Dallas, Phoenix, Las Vegas, Chicago, and Denver starting on March 11.

Southwest also revealed the cost of the fares during Wednesday's announcement.

See below for the fare schedule:

Southwest said it will begin taking reservations for those flights in mid-November.

The destinations are the same as those offered by the four other carriers at the Colorado Springs Airport but with a noteworthy advantage.

"These destinations will connect everyone to our network of more than 100 cities across the United States and Latin America," said Lexi Muller, a Southwest spokesperson, during a news conference Wednesday at the City Administration Building.

Muller said that the destinations are the most popular among local travelers, but a successful start will lead Southwest to offer more flights to more destinations.

With passenger revenue in the airline industry significantly reduced during the COVID-19 pandemic, some carriers are considering other markets to find new customers.

"Southwest brings competition to the airport and that will lead to lower fares," since Colorado Springs Mayor John Suthers.

Local leaders said they have had periodic discussions with Southwest for several years but the two sides began serious discussions in early September.

"A visit was conducted by eight individuals from Southwest Airlines," said Greg Phillips, airport director. "A serious look -- a two-day look -- on October 1st and 2nd. One of the executives toured the area 15 years ago and said that he wasn't impressed. But now, it's a completely different city and Southwest is impressed."

"The city is contributing around $300,000 from the hotel-auto rental tax fund and the county is providing (the same amount) from a tax on aviation fuel that can only be used for purposed such as this," said El Paso County Commissioner Mark Waller. "If this money had come from our general funds, I think it would have been a lot harder to justify it."

Around $1 million will finance a marketing campaign for Southwest.

"It's happening as the Cog Railway and the new Pikes Peak Summit House are opening next year," he said. "That, and having Southwest here, will bring more people who want to visit or live here. Think of what that will mean to our hotels and restaurants."

Southwest's ticket area is expected to occupy a vacant space between Delta Airlines and the check-in for Avis and Budget auto rental.

An employee of one of the airport's other carriers confessed excitement about Southwest's plans.

"We've been wanting to grow for a long time, " the employee said. "It's hard to grow when it costs so much more to fly from Colorado Springs instead of Denver. If Southwest is successful, it will help all of us."

Muller also reassured travelers that Southwest will ensure that its planes are clean and safe to protect against contracting the COVID-19 virus.