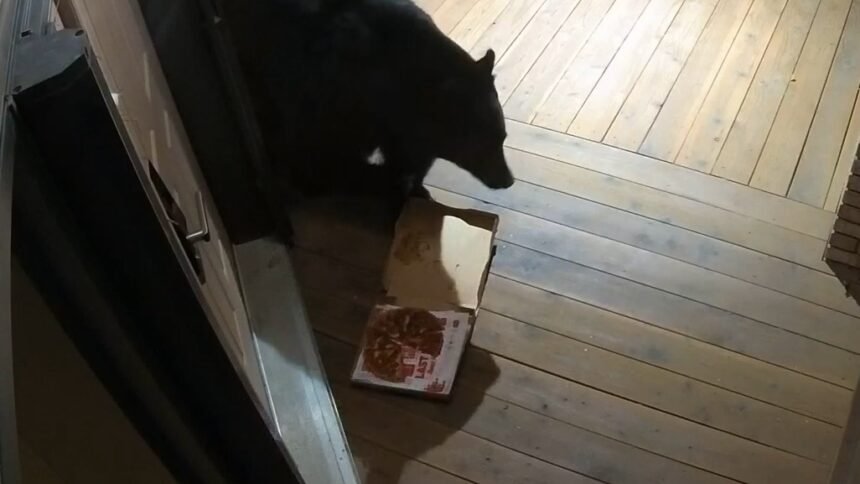 COLORADO SPRINGS, Colo. (KRDO) — While the idea behind contactless delivery is intended to keep people safe, it comes with its own dangers of attracting wildlife here in Colorado Springs.

Holly Vergunst ordered pizza delivery Tuesday night but then found the pizza box was empty by the time she opened it.

Vergunst watched her security footage to figure out what happened. A bear, caught on camera, devoured her dinner in less than two minutes.

Cody Wigner is the assistant area wildlife manager for Colorado Parks and Wildlife. He says bears can smell up to four miles away.

“Bears’ sense of smell is about 100 times more sensitive than humans,” Wigner said.

Wigner says bears are spotted in Colorado Springs year-round, but they’re especially drawn to humans this time of year.

“In the fall, they’re getting ready to fatten up for their hibernation,” he said. “They’re in what’s called hyperphagia. And they’re consuming up to 20,000 calories a day.”

Human food is more calorically dense than food bears find in nature, which is partially why they're drawn to things like pizza. Wigner encourages people who choose contactless delivery to retrieve their food as soon as possible.

Vergunst lives west of I-25 in Colorado Springs near the mountains. But Wigner says it doesn’t matter where you live in the Springs, you should follow the same precautions.

“There is some decent bear habitat throughout the city, with high densities of people,” Wigner said.

Wigner says keeping food indoors protects both humans and bears. Bears that become accustomed to humans and try to get into their homes could face the threat of euthanasia by Colorado Parks and Wildlife.

Watch KRDO Newschannel 13 at 10 to hear Vergunst’s reaction after realizing what happened.