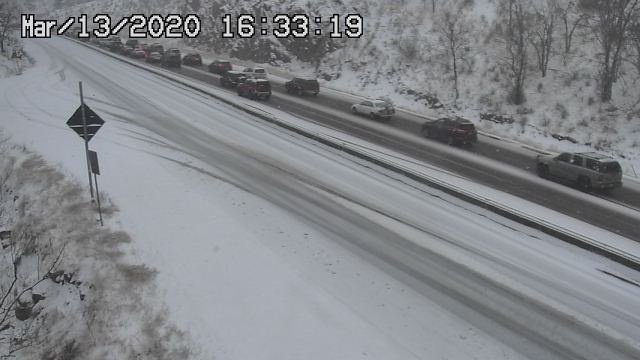 MANITOU SPRINGS, Colo. (KRDO) -- A crash involving more than a dozen vehicles on U.S. 24 in Ute Pass blocked traffic in both directions between Manitou Springs and Cascade Friday afternoon as snow pelted the area.

The Colorado Department of Transportation says it happened in the eastbound lanes around 5:27 p.m. near Waldo Canyon, but the emergency response also affected traffic in the opposite direction.

"A total of 13 to 16 vehicles," Cpl. Nicholas Hazlett, a state trooper at the scene. "We had at least three commercial motor vehicles involved, two semi-trucks and an ambulance, as well. Fortunately, no one was seriously hurt."

Emergency vehicles heading west to the scene barely squeezed through the traffic congestion.

"They honked their horns and blared their sirens at us," one driver said. "But we couldn't move over any more than we already had. They should have set up a roadblock farther back that would have given us a chance to turn around. Where we are now, there's nowhere to turn around."

Some drivers said they waited as long as two hours behind the eastbound traffic jam that stretched for several miles.

A burst of snow left Ute Pass icy and slushy Friday afternoon, and slick conditions were expected through the evening.