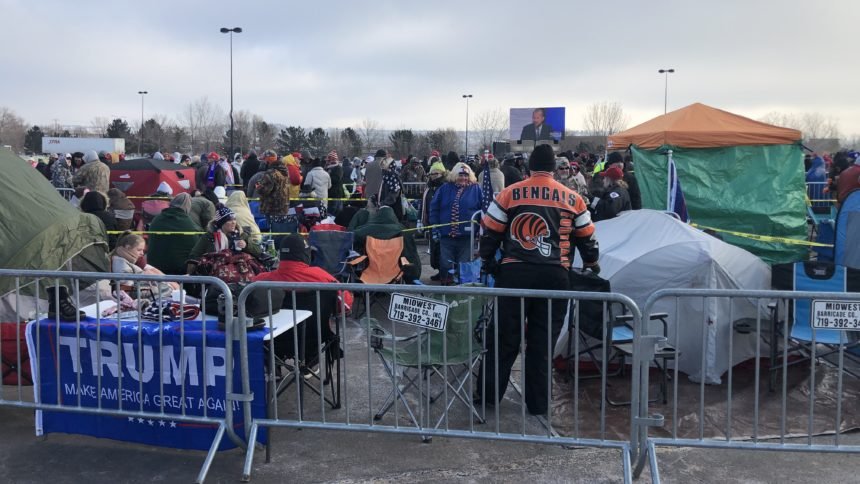 COLORADO SPRINGS, Colo. (KRDO) -- People started lining up in the parking lot at the Broadmoor World Arena more than 24 hours ahead of time to snag the best spots for President Donald Trump's campaign rally Thursday in Colorado Springs.

You can watch a replay of the event below:

By 9:30 a.m. Thursday, the entire parking lot was at capacity.

Video from @Chappin_Everett of people camped out and waiting for @POTUS. Stay with @KRDONC13 online and on air for all day coverage of the rally. pic.twitter.com/mRE9kE2jSS

Trump and Vice President Mike Pence flew to the Springs' Broadmoor World Arena in support of their own campaign and Colorado Sen. Cory Gardner's campaign.

Pence landed at Peterson Air Force Base around 2 p.m. and began speaking at 4:45 p.m.

Pence began his speech touting job creation under Trump's administration, and he mentioned the recent impeachment trial of Trump, saying the president was "acquitted FOREVER."

The vice president said "Trump delivered on every promise he made to Colorado, and then some ... but we're just getting started." He praised Trump's decision to increase the budget for the Air Force and urged supporters to vote for "four more years."

President Trump took the stage to Lee Greenwood's "God Bless the USA," and quickly thanked the thousands of supporters in attendance.

Trump stuck to the trend of touting America's military, and said when it comes to the armed forces, "we don't worry about budgets." He also showed appreciation for Colorado Springs veteran and USS Arizona survivor Don Stratton, who passed away recently.

After speaking about the military, Trump attacked one of his former friends, Mike Bloomberg, and other Democratic presidential candidates for their performance in Wednesday's debate.

Trump then took on what he called "fake news" media, praised several Fox News anchors, and said, "When we leave office in 26 years, they'll miss us."

The president drifted through a few topics before coming back to another Springs connection -- his appearance at last May's Air Force Academy graduation ceremony. He recalled shaking hands of more than 1,000 graduating cadets and said he approved a waiver that would let service academy athletes play professional sports before serving their military term.

Trump also said the decision on Space Force's headquarters location would be made toward the end of the year. He gave an indication that the Springs has a strong lead because of the amount of infrastructure already in place at Peterson and Schriever Air Force Bases.

President Trump finished his speech by about 7 p.m.

Some schools in the area, including District 2, are letting students out early to avoid the road closures planned for Trump's arrival. Colorado Springs police haven't given a specific route that the presidential convoy will use, but it's expected that many roads in southern Colorado Springs leading up to the World Arena will be closed for hours starting around 3:30 p.m.