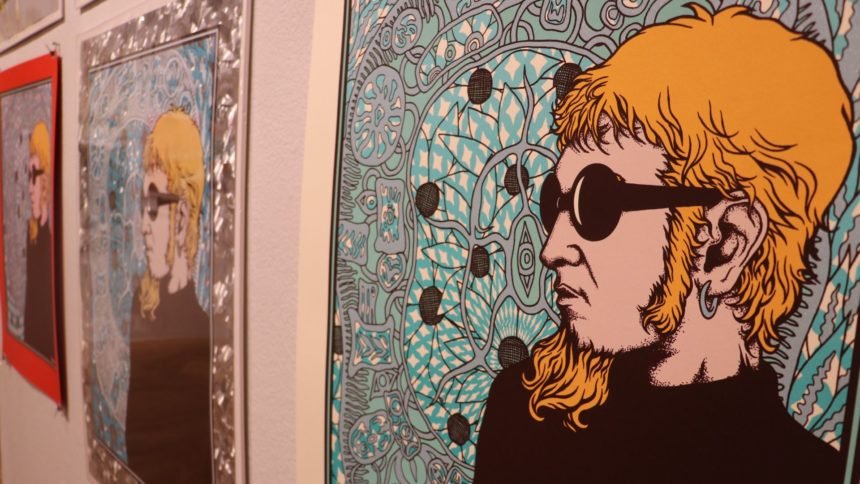 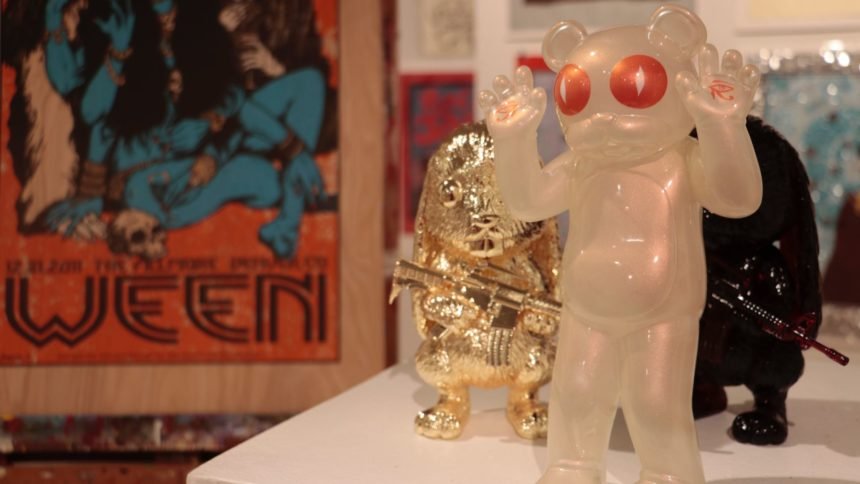 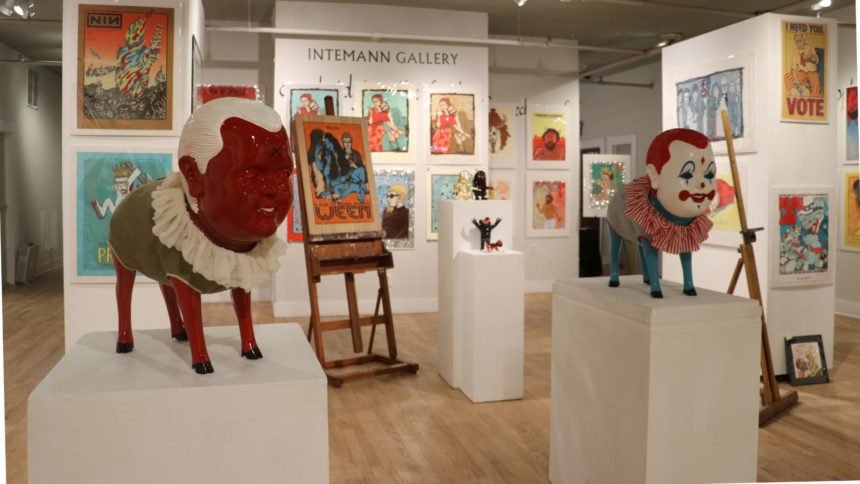 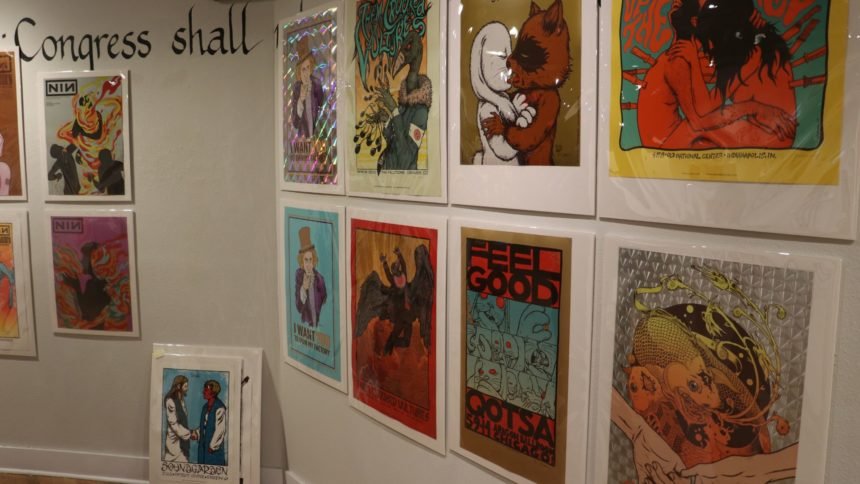 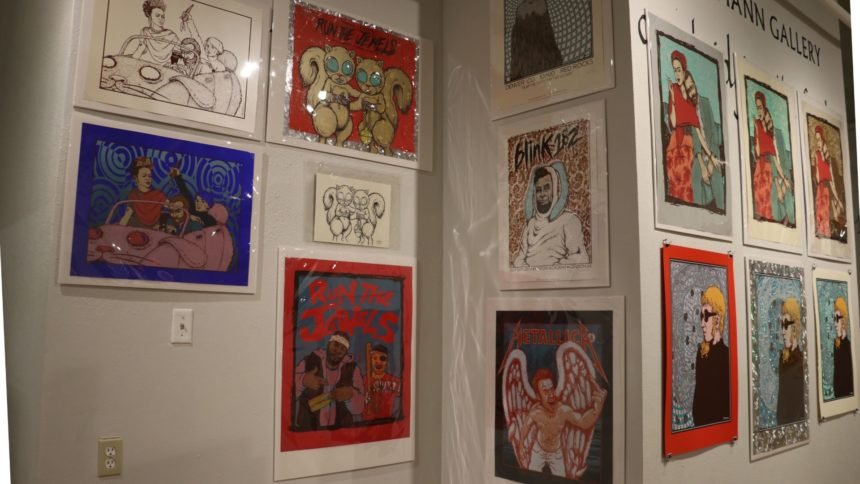 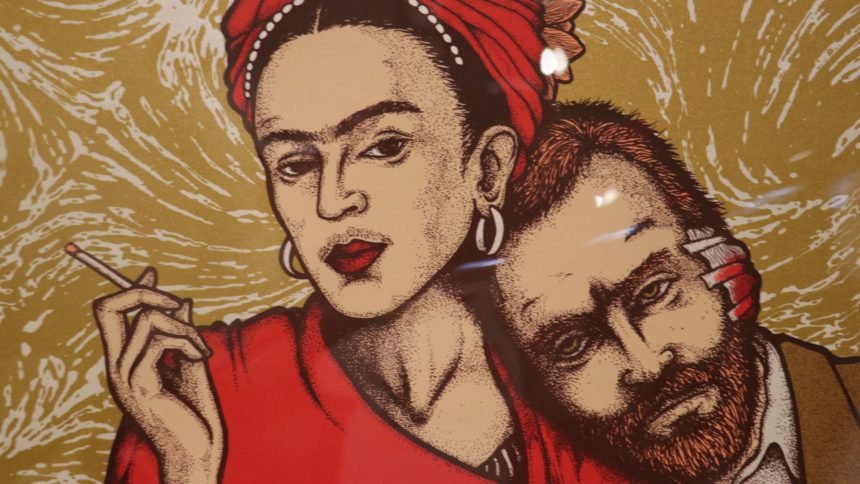 His intricate designs have been the first glimpse many fans get at a concert before their favorite bands take the stage, but ask Jermaine Rogers to describe his art in three words, and he'll tell you (accurately), "Boy, that's hard."

"Hey, that's three words: 'boy, that's hard,'" Rogers says Friday in between setting up posters and pedestals for figurines. His work is on display for the next month at the Manitou Art Center in Manitou Springs.

He rose to prominence creating gig posters for bands that would perform in Austin and Houston, Texas. When some of those bands rose in stardom, so did his art, and Rogers started getting gigs, himself, making art for world-renowned bands like Foo Fighters, Queens of the Stone Age, Nine Inch Nails, and Radiohead, among others.

His real answer is that his style is all about an idea. Once he gets the idea in his head, it just "drips out" from his hands. He uses a lot of color while not sticking to similar palettes, he's a fan of unorthodox layouts, and he loves unusual subjects. Add in a loose and bold feeling toward content, and you get his signature style that has been seen in esteemed venues like Red Rocks and the Rock 'n Roll Hall of Fame.

"When I first began doing [gig posters], they were done to advertise the shows. So when the band management hired you to do a print, they want the print to sell the show, they want to sell tickets and so you tried to make a piece of artwork that would totally overshadow everything else that was hanging on the record store," Rogers said.

For Rogers, his stop in Colorado is partly a homecoming. About a decade ago, he lived in Manitou Springs, and he says he would often be inspired by the serene silence of walking down Manitou Ave. late at night accompanied only by the sound of Fountain Creek.

"The name of the show is The Last Time I Was Here, I Was Bleeding, and the thought is the last time I was here, in some aesthetic ways, I was changing. Growth sometimes hurts, and sometimes you, metaphorically, you bleed and Manitou was a big part of that. There were things that I experienced in this valley and people that I met that made me reassess. A lot of heavy things. And so that's why this place holds a special spot," Rogers said.

Rogers got his start in the mid-90s designing posters for local musicians, but he recognizes the artists who helped promote musical artists in the decades before.

"As it relates to Rock 'n Roll, you have this sort of boxing style posters of the '50s, but then the '60s came along and in San Francisco, you had the big five, the psychedelic guys Rick Griffin, Wes Wilson, Victor Moscoso, and so the art and the music started to meld," Rogers recalled. "I came along in the '70s as a kid, and I was looking at the punk rock art. So guys like Raymond Pettibon were huge for me."

Rogers said he turned 20 as part of Generation X in a blossoming Texas music scene. He says it was the right place at the right time.

"Music was doing one of those beautiful weird evolutions that it does from time to time and I happened to be there," Rogers said.

Rogers' work has since spanned beyond gig posters, and he has created art for movies and books in addition to designer figurines. He says time helps him reflect on his pieces, and sometimes he'll find new meaning in them, though don't ask him for a specific favorite.

"It changes, man. There are pieces that I do and I sort of move on away from them, and later on in life those pieces resonate back strongly," Rogers said. "It's really weird that sometimes the further away you get from your own art, you look at it as a viewer and not as the artist."

Rogers says that everyone makes mistakes in their careers they wish they could take back, but artists put everything on full display. Any misgivings they might have about their past art doesn't change the fact that it's still out there in the form it was in when the artist created it.

"I think art should be a reflection of your life, and you should be able to look at a person's art, you know, almost like an avatar. You can say, 'OK, they were having issues at this point, I can see it.'"

The Last Time I Was Here, I Was Bleeding is running from Friday, Nov. 1, until Dec. 1. at the Manitou Art Center, 513 Manitou Ave.