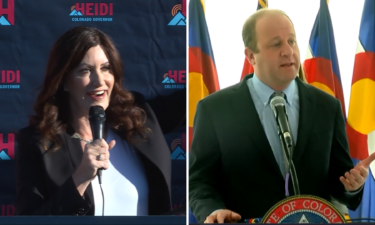 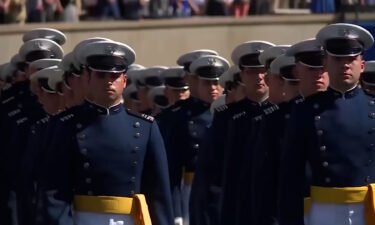 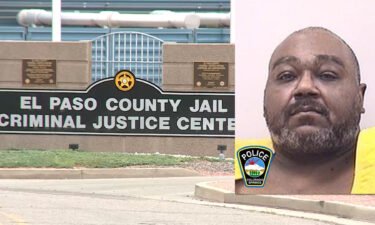 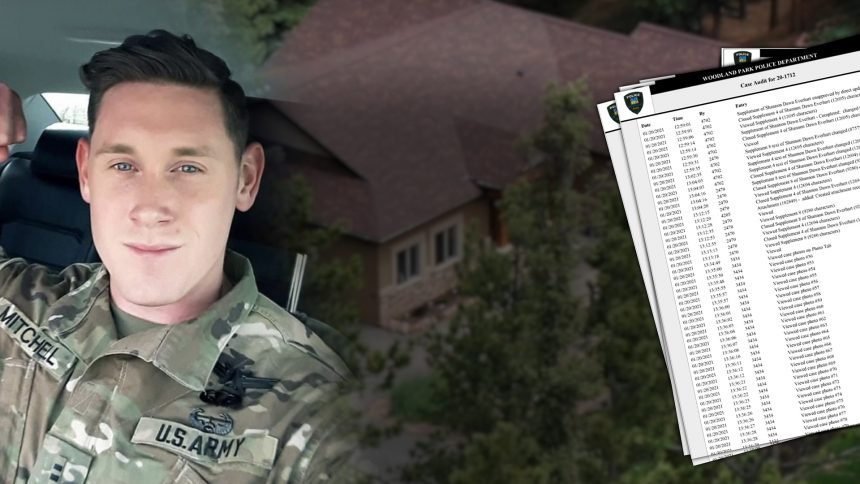 It was the night before Christmas Eve in 2020. Woodland Park Police Dispatch had answered enough calls to be able to guess what this next call was about.

"Jeremy?" said the Woodland Park dispatcher when answering a call for a welfare check.

Army Veteran Chief Warrant Officer Jeremy Mitchell had friends from all over the country determined to get him help.

"I just know that he is suicidal, and it is for real,” a woman told dispatchers.

The Woodland Park Police Department received at least 11 calls from concerned family and friends between December 23 and 24, 2020.

The calls started coming in after the 29-year-old father had sent suicidal messages to friends. He also posted a picture with a gun to his head on Facebook.

Jeremy served multiple deployments, including one in Afghanistan.

He quickly rose up the Army ranks, spending the last years of the military career as a geospatial engineer technician, creating maps to keep his fellow soldiers safe.

Jeremy had a tough time when he returned to Fort Carson.

He was diagnosed with Post Traumatic Stress Disorder and medically retired from the Army in 2018.

According to police reports, Woodland Park PD officers went to Jeremy’s home around 8 p.m. on December 23. Records show when Jeremy’s wife answered the door, she told them Jeremy would be mad if he found out they were there.

It wasn’t long after that police made the decision to leave Jeremy alone and in crisis.

The initial police report says Sgt. Mike McDaniel called his commander while outside Jeremy’s house. He told him Jeremy was drinking, yelling, possibly damaging stuff in the home, and could be suicidal with a gun.

McDaniel told the Commander he thought it would be safer for the wife and officers to leave rather than "force a situation where it could turn violent.”

Commander Andy Leibbrand agreed to leave Jeremy alone and directed McDaniel to leave the scene, according to police records.

13 Investigates obtained police-worn body camera footage. In the video, officers hear Jeremy threaten suicide by cop. About two minutes later, police walked down the driveway, got back into their cars, and left with Jeremy’s wife after confirming Jeremy had a pistol.

Friends and family continued to call, concerned and confused by the police response.

“We have a friend that's close by and she said that there are no police cars out front,” one caller said.

Records show that Sgt. McDaniel was back at the police department when he told Jeremy’s father by phone that Jeremy was threatening suicide by cop and officers had left the scene.

McDaniel told Jeremy’s father it was "better we leave and hope he goes to sleep after drinking"  instead of forcing physical contact.

“We've spoken with his dad and per the family, we are leaving him alone because we don't want to escalate the situation,” a dispatcher told worried callers.

Officers never went back out to Jeremy’s house that night, But Jeremy’s friends continued to call the police all the way into the next morning, Christmas Eve.

“Is there any proof of life?” a caller asked.

"We have not had any contact with him since last night. We're hoping for the best and preparing for the worst,” a dispatcher responded.

The young veteran was found by his wife just before 9 on the morning of Christmas Eve. Jeremy had died by suicide.

"This needs to be exposed"

Jeremy’s mother, Lisa, was 500 miles away in Oklahoma.

"I was at work, and my children called and said you have to come home and there's an emergency," Lisa said.

"They didn't want to tell me on the phone.

"They needed to tell me in person that he was gone.

The first time Lisa realized something was suspicious with Jeremy’s case was days later during a phone call with the coroner.

"She kept telling me odd things like 'some things are worth losing your job over, I don't care if I get re-elected next year, this needs to be exposed. The police failed your son, and he should still be here,” Lisa explained.

Lisa wouldn’t know for six more months what really happened the night of her son’s death. Police gave her some of the records explaining what happened that night but not all of them.

On January 20, the Woodland Park Police Department was notified that Jessica requested all police reports associated with Jeremy’s case.

An internal case audit shows within hours of the department receiving an email with Jessica’s request, one of the reports in Jeremy’s case was unapproved by Commander Leibbrand without a given reason, making it unavailable for release to Jessica and the public.

Leibbrand had previously approved the report about Jeremy's death on January 8, but he changed the status of the report to unapproved 12 days later. The report wasn't written by Leibbrand.

“I feel sick to my stomach,” Jessica said when she learned what was in the report. "I never want this to happen to another person."

Those records were also never sent to Lisa on February 3 even after Leibbrand re-approved the report, and they were put back into the public record.

"I have lost a child and then just grieving with that, and this is just unbelievable,” Lisa said. "I can't help but look at it as a cover-up, as a person whose evidence is suggesting that.”

With the help of 13 Investigates, Jessica filed another public records request in June. That’s when she finally got the once-hidden report.

The original report was written by Detective Shannon Everhart, who responded to Jeremy’s death on Christmas Eve.

One question Detective Everhart asked was why mental health medics didn't respond to Jeremy's home the night before.

Detective Everhart’s report also stated that Commander Leibbrand told McDaniel what Jeremy was doing “was not breaking the law" and that McDaniel was told "to leave the scene and monitor accordingly.”

13 Investigates has learned the Woodland Park Police Department’s response to Jeremy’s welfare check doesn’t align with their typical response to these calls.

We asked a local MAPS program manager if MAPS has ever been called out to a situation where someone has threatened suicide by a police officer.

"Absolutely, that's not an uncommon call for us to have,” said James McLaughlin with the Ute Valley Regional Health Service District.

"So generally what happens in that situation, historically is law enforcement would get on scene, secure the scene for us, make sure that the scene is safe for the patient and us. And then we get on scene and work for the client to de-escalate the crisis and get them the help that they need,” McLaughlin explained.

City data shows Woodland Park Police have called the MAPS team almost 400 times since 2018. In those hundreds of calls, they asked MAPS to help their officers or other agencies respond to a mental health crisis situation.

Dispatchers even mentioned the MAPS program in Jeremy's case.

"Here we call it MAPS, our mental health assessment professionals. So they may call them out there and take him on what they call the M1 hold ... which would be like 72 hours,” a dispatcher said to the Texas police officer who called to check on his friend.

"Why did they not do that?” Lisa asked when speaking to 13 Investigates.

"I'm extremely upset. I'm very upset for my kids,” Jessica said. “We have Jeremy, who was in the military and sacrificed a lot for this country only to have the local police department fail him."

Both Lisa and Jessica believe Jeremy would have benefited from a mental health professional responding that night.

"I believe things could have been different because Jeremy was a person that you could talk down,” Lisa explained.

Jessica believes Jeremy’s social media posts and the number of friends calling should have made it obvious to police that the young veteran needed help.

"Jeremy has struggled with this in the past; his posts on social media were literally a cry for help. He needed help. He had friends calling. All somebody had to do was come out there, who's a professional, get him out of there, and he may still be alive today,” Jessica said.

According to the Woodland Park Police Department's handbook, it appears Commander Leibbrand violated Woodland Park PD police when he changed the status of the report showing how officers responded to Jeremy’s home.

Woodland Park Police Department Policy states: "Reports that have been approved by a supervisor and submitted to the Records Section for filing and distribution shall not be modified or altered except by way of a supplemental report."

13 Investigates found it’s also against Colorado law to conceal, remove or impair the availability of a public record if a person lacks authority to do so.

"I want the people in public to know that they need to be held responsible. Somebody needs to be accountable for these actions," Jessica said.

The mental health professionals that could have been called to Jeremy’s house that night wish they had a chance to help.

"I'm not saying that you know that on all the completed suicides that we didn't show up on that we would have made a difference. All I am saying is that I sure would have liked to have an opportunity to do that,” McLaughlin said.

It’s a moment those involved can never get back.

“We're trying to understand why he's not still here. He should still be here,” Lisa said, wiping tears back.

13 Investigates spoke to responding officer Sergeant Mike McDaniel on the phone and he said he has no comment at this time.

We also attempted to reach Commander Andy Leibbrand by phone, social media and even certified letter but he never responded.

Leibbrand was put on paid leave by the city of Woodland Park a month ago. He is one of two Woodland Park PD commanders currently under criminal investigation by the Colorado Bureau of Investigations and the Teller County Sheriff's Office.

The CBI would not confirm to 13 Investigates if they are looking into the officer's actions on Jeremy's case.

13 Investigates took our findings to the city of Woodland Park. City Manager Michael Lawson said he could only discuss certain aspects of the case due to the ongoing criminal investigation involving Woodland Park PD.

"Those allegations are very concerning indeed and we are taking them very seriously. The city has been cooperating fully with both the Teller County Sheriff's Office and CBI. We are looking for the truth as much as anybody else. We are committed to finding that. The city will be again, looking forward to the results of those investigations and if there are actions that are necessary at the time following that investigation, we will take them," Lawson said.

"Certainly and truly, we feel for the Mitchell family," Lawson said. "We as a city, as employees, can't fully understand the pain or the hurt that they've experienced and that is truly regrettable.

"What I would like them to know is the city of Woodland Park is taking this very seriously. We are cooperating with the investigation, and we look forward to the conclusions of that investigation. If there are deficiencies, and as I mentioned, we can assure the family, I can ensure our community that we will do whatever is necessary to make sure that any issues that we uncover do not repeat themselves in the future.

"We are committed to making sure the community is safe, that it feels safe."

"We have a number of men and women who work for the Woodland Park Police Department that are committed to doing a tremendous quality of work day in, day out, that live and breathe making this community safe," Lawson said. "My role, and their role, is making sure that nothing endangers that."

If you or someone you know is experiencing suicidal thoughts, you can contact the National Suicide Prevention Lifeline 24/7 at 1-800-273-8255.