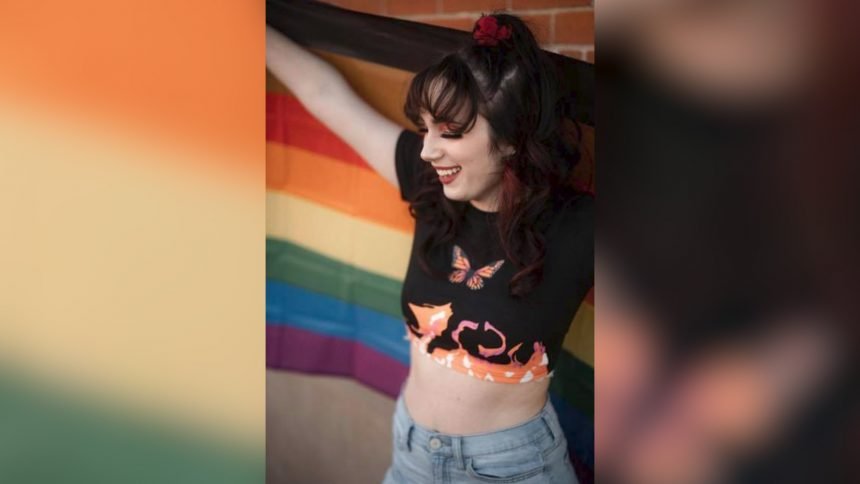 PUEBLO WEST, Colo. (KRDO) -- A 2021 graduating student at Swallows Charter Academy says her alma mater discriminated against her sexuality when they omitted her photo submission from the yearbook, but the school says the picture was against its dress code policy.

Laney Sorensen is a graduate of Swallows Charter Academy in Pueblo West. The 18-year old submitted a photo for her Senior picture in the yearbook back that the beginning of the school year. In the photo, Sorensen is seen holding an LGBTQ+ rainbow flag.

"There is a pride flag on my shoulders and I was wearing my crop top and my jeans," said Sorensen to KRDO. "I didn’t think it was going to be too big of a problem."

However after graduation, Sorensen opened her yearbook and the photo was nowhere to be seen. In its place was Sorensen's school ID photo.

"I am a proud queer woman and I am, to my knowledge, one of Swallows' only openly LGBT students and no one has really ever had a problem with that," said Sorensen. "I thought me having my flag wouldn’t be a problem."

Swallows Charter Academy says the LGBTQ flag wasn't the problem, but the crop top was the issue.

According to rules set forth by Swallows Charter Academy, "The yearbook staff reserves the right to refuse your image if it is inappropriate, so please make sure you make smart choices and use good judgment with your submissions. Appropriate dress required, remember SCA is a K-12 school."

In an email to KRDO, Swallows Charter Academy's Executive Director Dr. Cindy Compton said "concerns with the photo Ms. Sorenson submitted for the yearbook were simply and exclusively that she was not adhering to SCA’s dress code."

"There were two or three photos that had female classmates in dress code violating clothing but they decided to keep those in and not mine?" asked Sorensen. "I genuinely think it was because of the pride flag."

In the email to KRDO, Dr. Compton admits certain photos should've been omitted from the yearbook due to dress code violations, but weren't. The Executive Director says they have apologized to Sorensen for their inconsistency.

“As stated in SCA’s Nondiscrimination policy, 'Respect for the dignity and worth of each individual shall be paramount,'" Dr. Compton said in an email to KRDO. "I greatly regret that we were not able to handle our concerns with Ms. Sorenson’s yearbook photo in a way that she felt both her dignity and worth were being honored."

The school says it attempted to reach Sorensen back in February to discuss the issue. However, Sorensen says she didn't find out about the photo change until she opened her yearbook on graduation day in May.

KRDO asked Swallows Charter Academy's Executive Director for the original emails sent in February, but Dr. Compton says deleted emails are purged from the trash after 30 days and are no longer available.

When asked why they couldn't edit the photo to make it dress code appropriate, a solution Sorensen says she would have been in favor of, the school's Executive Director said they do not edit photos for any reason.

"We use the senior photos submitted, or we use the school picture that is taken for school ID purposes," said Dr. Compton. "Our intent is to always contact the senior to have a new picture submitted that meets dress code standards, if that is necessary."

Sorensen says she's speaking out because she doesn't want a similar situation happening to students at Swallows Charter Academy or at other schools in Colorado.

Dr. Compton says they will be providing more details in the senior letter so students understand that photos that violate SCA’s dress code or other policies will not be published, and will be utilizing better internal processes to consistently apply the dress code for future yearbooks.