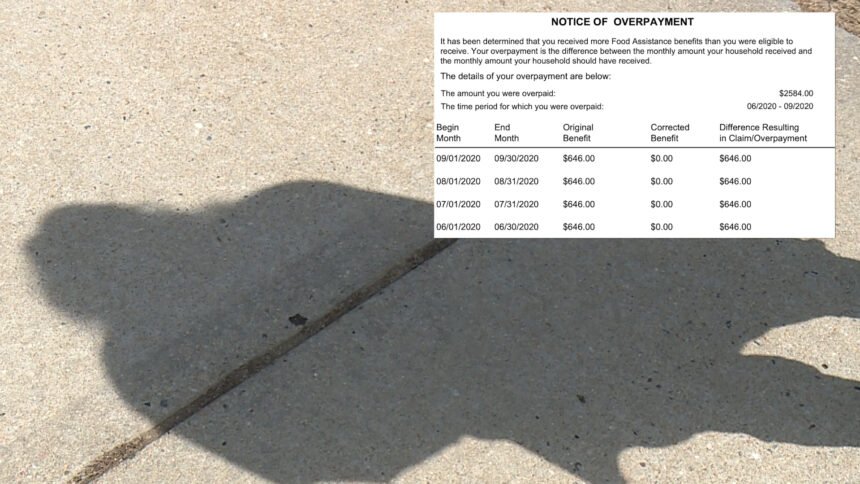 COLORADO SPRINGS, Colo. (KRDO) -- A Colorado Springs family is struggling to stay afloat after the state sent them a bill to repay thousands of dollars in food assistance they received during the pandemic.

And it appears that the issue could impact more Colorado families.

"We'll be in line at food banks with other people, where we've never been before," the Colorado Springs mother said.

The family, embarrassed by a lost job and their need for assistance, asked KRDO not to reveal their identity.

Her husband lost his job due to COVID-19 closures, and he immediately applied for unemployment and food assistance. The family started receiving the benefits in May. The federal government approved an extra $600 per week in unemployment benefits. Those temporary federal emergency benefits put the family over the income limit for food benefits but they had no idea.

"Now four months later, they're saying, 'Whoa, because we gave you that money that you needed, you have to pay the food benefits back that you got because it knocked you into a different income,'" she said.

The state sent them a bill for over $2,500 for the entire amount of food assistance they received from June to September.

"I can only imagine how many families are in our situation that are even worse, and they're going to get their notice when they reapply. Saying, 'Hey you got to pay this back,'" she said.

As many at 61,000 El Paso County residents qualified for the additional $600 per week in unemployment benefits, according to the Colorado Department of Labor and Employment.

From May to August of this year nearly 40,000 households in El Paso County collected food benefits commonly known as SNAP.

It's unclear how much overlap there may be in the benefits programs.

We took the family's concerns to Karen Logan, the Director of Economic and Administrative Department of Human Services.

"Any time there's a claim on a family member or a household on their food benefits, it's unfortunate. Because we know that they wouldn't be applying for benefits with us if they didn't really need it," Logan said.

Logan said changes in income can impact SNAP eligibility. That's why DHS notifies those who get benefits to update any changes to their financial situation right away.

We asked if DHS should have given more warning to families that the temporary unemployment benefit could make them ineligible for food assistance.

DHS couldn't quantify how many people could be impacted by the temporary unemployment benefits issue in El Paso County, but a spokesperson said they want anyone who finds themself in the situation to reach out.

DHS officials said people can set up payment plans or allow DHS to take a percentage of the money owed out of the current SNAP benefits a household is receiving.

After KRDO got involved, DHS contacted the family we spoke with and has already removed over $600 from that $2500 backpay bill they received.

If you have a story or lead you'd like to us to investigate, email Chelsea.Brentzel@krdo.com.