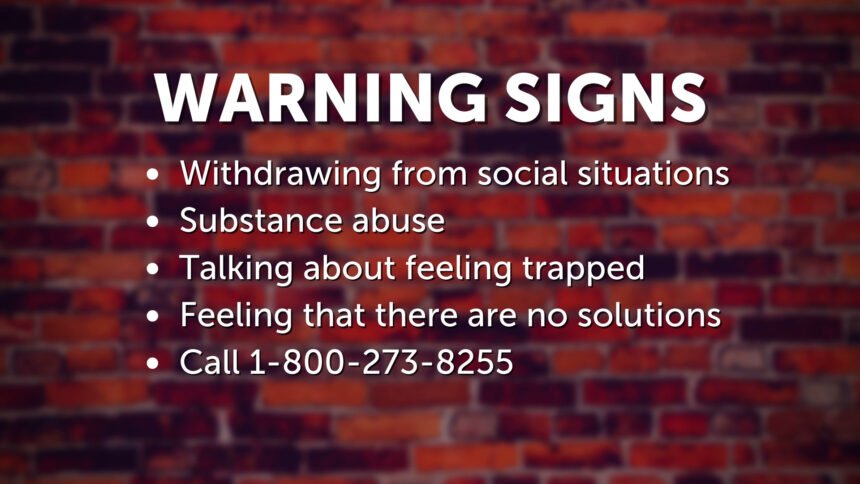 COLORADO SPRINGS, Colo. (KRDO) -- According to the Centers For Disease Control, suicide rates increased nationally by 30% between 1999 and 2016 -- in Colorado, rates increased by a staggering 34%.

Benek Altayli, the Director of Mental Health at the University of Colorado Colorado Springs, and health experts in Southern Colorado want to combat those numbers by having more conversations about suicide, especially with people who may be struggling.

There are a few signs that someone you know may be having suicide ideations:

-Sharing comments or thoughts about suicide
-Increasing their use of alcohol and/or drugs
-Showing aggressive behavior
-Withdrawing from friends, family, and community
-Showing dramatic mood swings
-Acting impulsively or recklessly

Dr. Ryan Jaarsma, the Director of Behavioral Health at Southern Colorado Family Medicine, says those are big indicators of someone who is battling thoughts of suicide, especially if they have a history of mental illness in their family.

Jaarsma says suicide is preventable as long as we’re able to help those at risk.

Granted, talking about suicide with someone you think may be struggling isn’t always easy, but there are effective ways to navigate those situations.

UCCS' Department of Mental Health is working with other departments on their campus, like the Veterans Center and academic advising, to make mental health resources more accessible to students who are struggling.

Atayli says they have seen an increase of students with mental health issues since the start of the pandemic.

Their department does have an anonymous test on their website that shows you if are in need of help, and where you can get it.

UCCS will also host a suicide prevention and awareness training from their wellness center on at 9 a.m. Friday. Watch the livestream here.

If someone you or someone you know is struggling with their mental health, call the National Suicide Prevention Hotline at 800-273-8255.