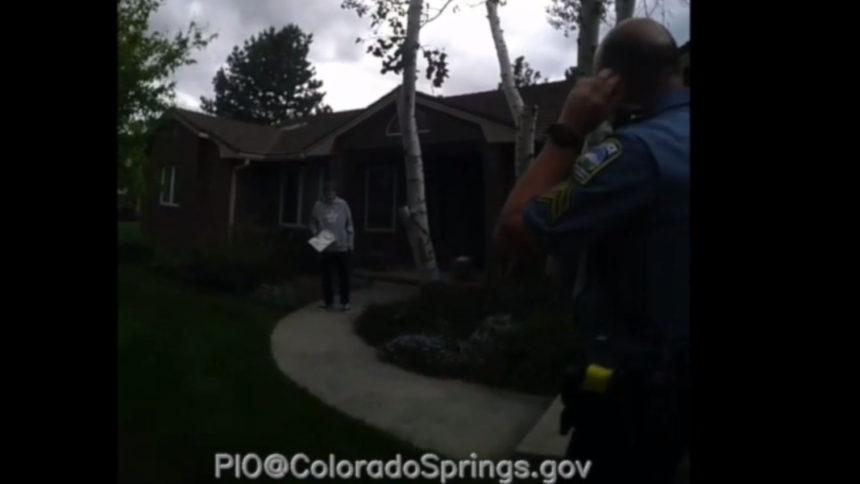 COLORADO SPRINGS, Colo. (KRDO) -- The Colorado Springs Police Department has released 911 recordings and body-worn camera footage from an incident that happened before Chad Burnett died in custody on May 24.

See the video at the bottom of this article. The main portion of the incident begins around the 31-minute mark.

Police officers were called to a home on Ashgrove Street after witnesses reported that Burnett was threatening people with a knife and screaming that he wanted his stuff back.

When officers arrived at the home, they can see Burnett inside holding a knife, and they ask him calmly to put the knife down and let them inside.

There had been a history of about 20 calls for service at the address on Ashgrove Street before officers arrived on the morning of May 24. Footage shows the officers talk to Burnett for several minutes, and they attempt to get him to open the door.

At a certain point after officers arrived, Burnett called 911 and used a fake name, claiming that he owned The Broadmoor and had a private jet. Video provided by CSPD then cuts back to officers speaking with Burnett outside, and he appears to be holding papers.

Burnett then claims he's sponsored by the San Diego Police Department and lifts the papers that he's holding before immediately turning and running inside the house. The officers chase him inside and wrestle him to the ground in the living room while deploying a stun gun.

"I didn't do anything," Burnett can be heard saying while struggling with the officers.

"We're not going to kill you," an officer says, "stop resisting."

Burnett is still vocal but gets stunned a second time, saying, "Help me, please." While officers keep trying to put Burnett in handcuffs, he repeatedly says "no." Another officer says "Stop resisting" and Burnett says, "OK fine, I didn't do anything wrong."

Eventually, the officers get Burnett on his feet and escort him outside while he screams profanities at them, saying "You're not taking me out of my house." Burnett continues to thrash about and then goes back to the ground on the front porch. One of the officers uses his body weight to keep Burnett from moving.

"I want you to breathe and catch your breath," one of the officers is heard telling Burnett. "Help us keep this low-key for you."

Burnett lays on the ground for about another minute before the officers pull him to his feet, but then he leans his body back inside the entryway of the home and forces himself back to the ground. An officer says, "The easy way is over with," as officers grapple Burnett's body while he continues to struggle and mutter to himself.

Burnett struggles inside for several minutes but then stops talking and only exhales several moans.

"Chad you've gotta chill for us," one officer is heard saying.

While officers are recalling the events of what happened, Burnett isn't moving.

"Is he breathing?" another officer asks.

"Yeah he's got a pulse," an officer says while checking on him.

The officers put multiple shackles on Burnett and a mesh bag over his head to prevent biting and spit. One of the officers says he can feel a light pulse while Burnett is unconscious.

After several minutes, however, the officers express concern that Burnett's condition is deteriorating. They remove the mesh bag from his head and lay him on the floor, then one of the officers performs CPR on him. Burnett doesn't have a pulse, and at this point in the video, his face is now blurred.

Burnett was pronounced dead, and the incident is still being reviewed by the 4th Judicial District Attorney's Office.

Watch the video below. Viewer discretion is advised.

In Custody Death - Ashgrove Street from COS Police Department on Vimeo.