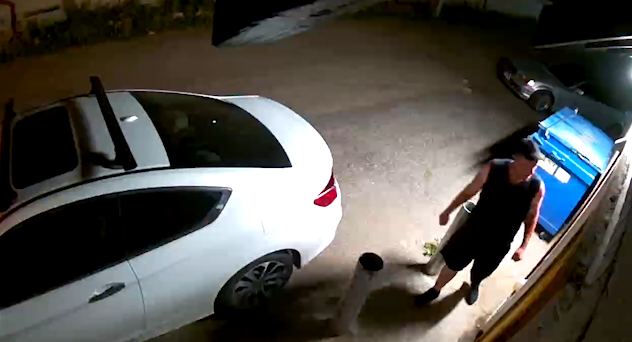 COLORADO SPRINGS, Colo. (KRDO) -- The owner of a local medical marijuana shop is putting the public on the lookout.

Early Sunday morning, his surveillance video caught a man knocking on the backdoor of his business, Healing Canna on the west side of Colorado Springs.

The man in the video is seen knocking on the door several times, often walking away and standing behind a dumpster. It appears he's using a sock to try the doorknob.

After nearly 20 minutes, the suspect is seen picking up a large rock and throwing it at Eccher's White Honda. The rock bounces off the hood and into the rear windshield, shattering the glass.

"I did hear something. It was a subtle thud inside the facility," he explains.

Eccher says he finally heard the noise and went outside. Surveillance video shows him walking around the dumpster to find a Silver BMW. As Eccher was trying to take a picture of the license plate, the car starts to drive away.

He runs back inside, grabs his keys and jumps into his own car to try and find the suspect. Dispatchers over the phone asked him to let the suspect go.

Eccher says, "the windows were so dark, it was 2 in the morning so I wasn't sure what I was looking at, and I look to my left and see my rear windshield busted out and I knew something was wrong."

The man in the video is wearing black shorts, a black tank-top, a black hat, and has a distinctive tattoo on his left arm.

Eccher is offering a $500 cash reward for information leading to an arrest.