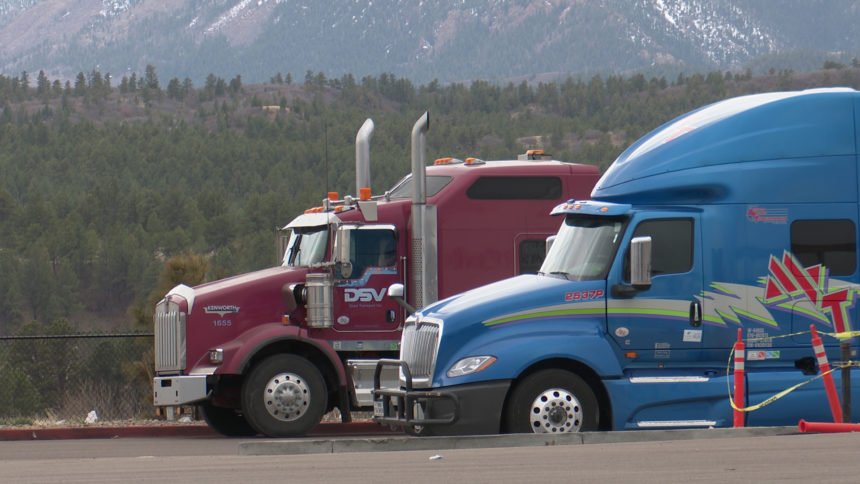 COLORADO SPRINGS, Colo. (KRDO) -- Truck drivers in Colorado Springs say they are traveling longer distances in shorter times as people stay off the roads during COVID-19.

The Pilot Travel Center was busy with truckers Saturday as they stopped to rest at the truck stop near Monument.

Christopher Harrold, a driver from Utah, says he's had to travel up to 12 hours at a time to deliver medical supplies like kidney dialysis machines.

"I just hope that this situation gets better soon and everybody can get back to work soon and back to a normal way of life again," he said.

He travels with his dog Snickers to keep him company. On his dashboard you can see hand sanitizing gel and a mask he wears when going outside.

Cinnamon and Darrick George say they too are taking precautions when going outside.

We try and stay in our truck as much as possible," said Cinnamon, whose 12-hour shift alternates with her husband's.

"And you don’t know how precautious everybody else is.” Cinnamon added.

Truck drivers are in high demand as grocery stores restock their shelves during the coronavirus.

Scott Endres, a truck driver from Colorado Springs, says he encounters the most delays at distribution centers because there are less people working at the plants.

He says he feels a stronger sense of responsibility to deliver essential goods, which can be stressful. But he's also noted how some people are stepping up to support truckers.

"There’s been a lot of people out there that have also been giving food out to the drivers and thanking us for everything we’ve done," he said.

President Trump has also recognized the efforts during an event at the White House on Thursday.

“In the war against the virus, American truckers are the foot soldiers who are really carrying us to victory," Trump said. "And they are, they’ve done an incredible job.”

Cinnamon says she's grateful to have a job in a time when millions of Americans are claiming unemployment.

“Some people have called us heroes and stuff," she said. "And we don’t feel like we’re heroes. We’re just out here trying to pay our bills and keep going because we’re given the opportunity to.”