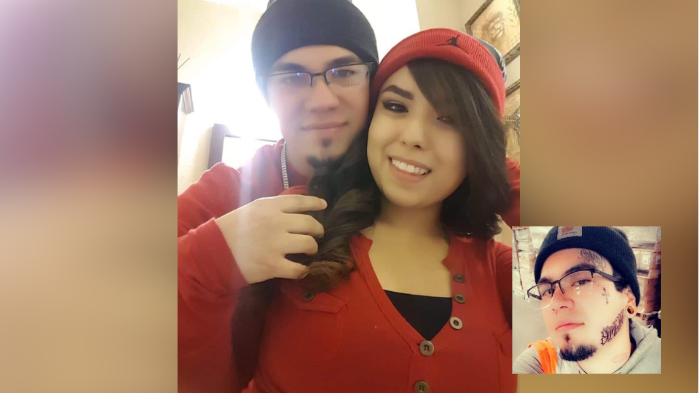 A young mother is alleging that Pueblo police gave out false information regarding the officer involved shooting that left her boyfriend dead over the weekend.

Police say that 24-year-old Estevon Cruz fired a weapon at four officers who were responding to a domestic violence report at his home Saturday evening. That weapon turned out to be a CO2 powered pellet gun.

Cruz's girlfriend, 22-year old Courtney Piper, spoke to KRDO in an exclusive interview Tuesday. Piper says she was inside their home on the 3200 block of Rex Street when shots rang out.

Piper is referring to the pellet gun Cruz allegedly pointed at and shot officers with.

Piper says she and Cruz were arguing about random things earlier in the night after he picked her up from her mother's home. Things got heated, but Piper says she never felt like she was ever in danger.

She isn't certain how police were called.

From that 911 call Pueblo Police said they heard threats being made by a male party towards a female.

When Pueblo Police arrived at their south side home and knocked on the front door, Piper says she and Cruz were in the process of going to bed. Initially, they were unaware who was at the door until Police notified who they were and that they were coming inside.

On Monday, Pueblo Police said they heard threats being made inside of the home by the male -- even threats to take the woman hostage. Police said that when the officers breached the door, a woman fled the home. Piper says that's not true.

When asked if she saw Cruz point a weapon and fire at officers, she says she doesn't know. Piper says she was taken into the kitchen away from Cruz when Pueblo police started firing. However, Piper was aware of the CO2 pellet gun in their bedroom.

In a statement to KRDO, Pueblo police stood by their Monday report. They say audio from the 911 call and body cameras back their version of events. So far, neither audio nor body camera footage have been released to public.

Less than 72 hours after the fatal shooting, Piper has found it difficult to sleep. The young mother distracts herself with her and Cruz's 2-year-old daughter.

She says she has received threats on social media since the shooting. She says some people accuse Cruz of being a 'wife beater', while others accuse Piper of causing Cruz's death.

Discrepancies may be cleared up if the 911 call and body camera video are released. However, Pueblo police tell KRDO it may take months before they're released to the public.