This is what strongman diplomacy looks like. Recep Tayyip Erdogan, Vladimir Putin and Donald Trump got exactly what they wanted in northeastern Syria.

Turkey’s President got the buffer zone he always demanded, pushing Kurds back from his border and biting a chunk off of Syria for himself. Russia’s leader showcased his new role as mayor of the Middle East, and his military police will now jointly patrol the border of NATO member Turkey. And Trump gets to tell his voters he’s bringing troops home — even if it’s not quite true.

Over three years, it’s become quite clear that Trump prefers the company of kingpins to diplomatic drudgery with US allies. That mentality harks back to his days as a real estate shark. Whether he’s with business titans or dictators, life is much easier when you can parcel out the world with your strongman friends.

The problem is that he’s playing out of his league. By letting veterans like Putin and Erdogan decide what happens next in Syria, he sent a message that the US is no longer the key global power in the Middle East. And by withdrawing US support from its Kurdish allies, he’s dealing a grievous blow to America’s moral power everywhere in the world.

Trump’s suggestion that Russia and Turkey are stepping into a foreign quagmire still resonates with his most loyal political supporters. “America First,” after all. But this episode also humiliates the US, whose troops were given just “one hour and 31 minutes” to leave Syria by Russia’s defense minister.

It’s all a sign that whether the President serves four years or eight, America’s global footprint will have significantly shrunk by the time he heads home to Trump Tower.

‘Saying no … was not going to be enough’

“It became clear that saying no, and refusing to do it myself was not going to be enough, so it was time for me to offer my resignation,” said former Homeland Security Secretary Kirstjen Nielsen, describing how she dealt with demands by other Trump administration officials, in an interview today with PBS’s Amna Nawaz.

Nielsen was the face of the Trump administration’s zero-tolerance policy, which led to the separation of thousands of migrant families.

When the history of Trump’s impeachment is written, Tuesday’s barely believable drama may go down as a turning point. Here’s how the day unfolded in DC:

Well, he or she is back, with a book titled, “A Warning,” due to be published next month, which promises damning behind-the-scenes details from Trump’s White House. Brace yourselves for a classic D.C. storm — and a revived guessing game about the identify of this generation’s Deep Throat.

As Turkey, Russia and Syria negotiate control over the country’s northeast, thousands of foreign women and children are waiting to hear their fate, in camps for the families of suspected ISIS fighters.

“Women in the camps have been leaving me voice messages and texting frantically, saying, ‘We’re terrified. First we were terrified of the Turks, and now we are terrified of Assad’s forces,” says Letta Tayler, a senior researcher in crisis and conflict at Human Rights Watch.

Many Western governments have been slow to repatriate their citizens from camps like El Hol, Tayler tells Meanwhile, noting there are many women and children from Germany, France, Belgium, Denmark and the UK.

“Some women are wondering if they should dig trenches. One German woman said that she and other mothers were using permanent ink markers to write their children’s names, dates of birth and nationalities on their backs, in case they get separated,” she says.

Fires burn on shut-down boulevards, protestors throw rocks and bottles, armor-clad security forces advance. A wave of civil disobedience is bursting out all over the globe.

Fury over economic inequality, price hikes and corruption keeps blowing its lid in Ecuador, France, Chile and Lebanon. In Hong Kong and Catalonia, demonstrators demand political freedoms. In the UK, marches against Brexit squeeze through streets in between protests for action on climate change, with brethren in North America, Europe and Australasia.

The spark usually starts small, before enflaming popular anger. In Chile, protests began with a hike in subway fares. In Lebanon, a tax on WhatsApp calls kicked things off. But in both cases, deeper economic issues are fueling the fire. Meanwhile, Hong Kong’s demonstrations — perhaps the most flagrant challenge to China’s Communist party since Tiananmen Square — began with anger over a legislative proposal that has since been retracted.

Across time zones, class and race, people are saying their governments do not serve their interests. Their fury creates the kind of fetid political climates that strongmen and the enemies of open government can exploit. Previous backlashes against the powerful saw Britain vote to leave the EU and Americans to elect Trump.

Political systems are being torn at all over the world — often by the norm busting leaders that populist dissent has produced. The big political question of the coming years may be whether protestors marching for change can make governments more responsive to their needs.

‘A whimsical device and pen name’

Everyone thinks politicians are two-faced, and two prominent Republicans have jokingly ‘fessed up. Utah Senator Mitt Romney this week revealed that he has a secret Twitter account under the pseudonym “Pierre Delecto.” And Trump’s top trade negotiator Peter Navarro has admitted to quoting his own imaginary alter-ego “Ron Vara” — styled as a fierce critic of China.

The character that Navarro described as a “whimsical device and pen name” has now incurred Beijing’s wrath. But he says the men from Zhongnanhai need to lighten up — and he can’t seem to let go of the joke, telling CNN’s Christine Romans: “A source close to Ron Vara indicates China has revoked his visa and lowered his social credit score. In a related event, the Ministry of State Security has banned all anagrams and humor in social media and non-fiction books.”

Tom Steyer has overtaken Donald Trump in digital spending on Facebook and Google. The Democratic contender has only been in the race for under four months, while Trump’s spending dates back to at least May of 2018 (earliest date through which FB and Google data is available). Steyer has spent nearly $10 million ($9,845,619 to be exact). 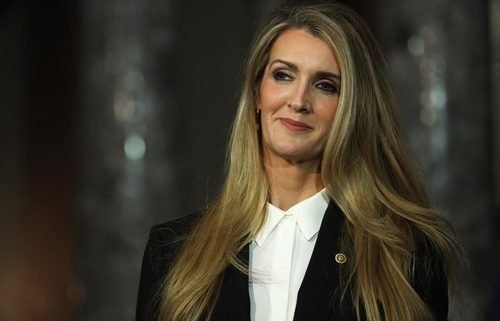