London has become the first city to prohibit the global environmental movement Extinction Rebellion from staging protests, in a move condemned by legal observers and campaigners as a massive “overreach.”

“There have been draconian policing methods e.g. (in) Brisbane, and water cannons and violence used by police in Belgium. But this is the first ban,” Zion Lights, an Extinction Rebellion spokeswoman, told CNN by text message.

“We are worried by this erosion of democracy while the real criminals continue to destroy the health of our planet,” she added.

Police officers have cleared activists from makeshift camps in Trafalgar Square and other sites in the UK capital, where Extinction Rebellion has lawfully congregated since its “International Rebellion” protest began last week.

The crackdown comes after London’s Metropolitan Police issued a revised Section 14 order on Monday night, stating that “any assembly linked to the Extinction Rebellion ‘Autumn Uprising’… must now cease their protest(s) within London.”

The force said the move was intended to prevent “ongoing serious disruption to the community.”

But, by Tuesday morning, the environmental campaigners had made it clear that they wouldn’t back down. Many activists returned to Trafalgar Square in defiance of the ban and the group said it would be pursuing legal action against the police force’s decision.

The movement’s co-founder, Gail Bradbrook, staged a demonstration at the UK Department of Transport, climbing atop the entrance as other activists glued themselves to the building below.

Referring to trees that are scheduled to be felled in the building of the UK’s HS2 high-speed rail project, Bradbrook said: “I do this for the beautiful pear tree at Cubbington Woods, 250 years old they have no rights… I do this in fierce love of the 108 ancient woodlands threatened by HS2, this climate crime of a project. I do this in the spirit of what Emmeline Pankhurst called ‘the noble art of window smashing.'”

Since it launched a year ago, Extinction Rebellion has grown into an international movement. The decentralized organization has attracted thousands of protesters to participate in nonviolent civil disobedience aimed at forcing government action on ecological breakdown. Over the course of these demonstrations, they have helped to transform the public debate surrounding the climate crisis.

But they have also been criticized for their tactics. In a report released by centre-right think tank Policy Exchange, a former head of counter-terrorism for Scotland Yard warned that Extinction Rebellion should be treated as an extremist anarchist group and urged police to be more proactive in responding to their protests.

CNN has reached out to Policy Exchange — rated among the least transparent think tanks in the UK by transparency campaign Who Funds You — for comment about how the report was funded.

Since those comments, policing tactics appeared to shifted. Compared with Extinction Rebellion’s protests in April, the October rebellion has seen a higher arrest tally — more than 1,400 at the last count.

But observers say the Met’s decision to enforce Section 14 of the UK’s Public Order Act 1986, which is aimed at preventing “serious public disorder, serious damage to property or serious disruption,” is a step too far.

Kevin Blowe, the coordinator of the Network for Police Monitoring (Netpol), told CNN that the order surmounted to a ban on Extinction Rebellion, or XR, without due process.

“What happened last night was to massively extend powers available to the police to effectively ban XR from protesting. For us, that is deeply problematic, because it is a massive extension of what Section 14 was meant to be used for,” Blowe said.

“You can’t just use the powers because you’ve got them, you need to prove that it does not remove the rights of people for freedom of expression and assembly. We think there is a powerful case to be made against this decision,” he added.

The Good Law Project, a non-profit seeking to support progressive law, has suggested that the Section 14 order amounts to a huge overreach of statutory power; it said it was exploring legal challenges to its validity.

“We think it’s pretty unprecedented for an order to be made for a particular organization… it feels disrespectful and unlawful,” director of the Good Law Project, Jolyon Maugham QC, told CNN.

“Usually the orders seek to strike a balance between people’s lawful right to protest and broader public interest. This order bars people from doing anything linked to Extinction Rebellion in London… it’s quite extraordinary,” he added.

On Tuesday, Metropolitan Police Deputy Assistant Commissioner Laurence Taylor issued a statement to clarify the conditions on demonstrators in London.

“I want to be absolutely clear. This does not mean people are banned from protesting in London. The condition applies specifically to the Extinction Rebellion ‘Autumn Uprising,'” Taylor said.

“If Extinction Rebellion, or any other group, come to us with a proposal for lawful protests then of course we will discuss that with them.” 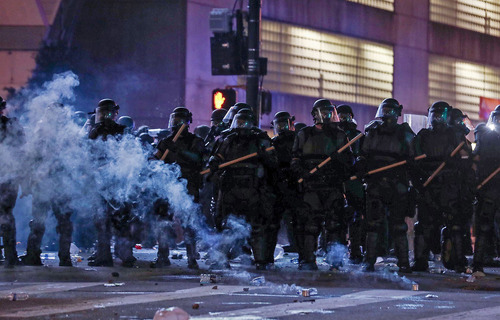