Overview:  We’re tracking several upper-level waves that will bring us periods of wind and changing temperatures this week. Although we do have some chances for a little precipitation in various areas throughout the week, it doesn’t currently appear we should expect any major storms to take shape over the area.

Today:  Any spotty rain and/or snow showers over the eastern plains early this morning will drift east and come to an end with a clearing sky from west to east expected during the day. The wind shouldn’t be too strong anywhere today, but the air will remain cool enough that even a light breeze may be noticeable. High temperatures should reach the 50s for most of eastern Colorado with a mixture of 40s to lower 50s for our local mountain communities.

Tonight:  Mostly clear with some wind at times as a surge of cooler air rolls over the plains. Over the northern slopes of the Palmer Divide and the Raton Mesa some patchy low clouds could develop by early Sunday morning. We expect low temperatures in the 20s to lower 30s for most areas, but the high mountain valleys will fall into the single digits and teens.

Sunday:  Breezy and cooler with clouds increasing during the afternoon. By late in the day spotty rain and snow showers may develop over and near the mountains southwest of Pueblo, and by evening a few rain and/or snow showers may also drift farther northeast, but it does not appear likely that we should expect widespread, organized precipitation through Sunday night. 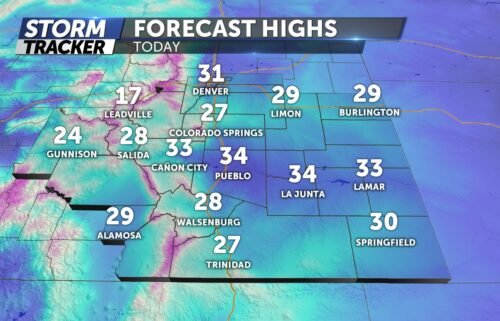