Overview: We're in for a wild ride with regard to temperatures this weekend with a quick warm-up on Saturday followed by a temperature crash on Sunday. We should receive at least a little snow soon locally and some heavier snow will be welcome news over areas where wildfires are burning. Next week, while eventually warmer than Sunday, still looks cool compared to recent weeks.

Today: A shallow layer of cold air left behind from our recent cold snap will gradually drain away from the higher terrain today. Low lying areas along and east of I-25 will likely remain colder than the higher terrain for much of the morning, but most areas on the plains should warm nicely eventually this afternoon. On the higher terrain along and west of I-25 the warming will occur more quickly, and the wind will be strong for much of the day. In these areas where the wind and warmth combine early, conditions will likely become favorable for the spread of wildfires and so the National Weather Service has issued a Red Flag Warning effective from noon until 7:00 PM for the I-25 corridor and mountain areas to the west. The wind on the higher terrain will increase to 15 to 25 mph with gusts routinely over 30 mph during the afternoon, and the sky should remain partly cloudy.

Tonight: Windy & mild this evening, then turning sharply colder from north to south after midnight with a blanket of low clouds and possibly some freezing fog following closely behind the initial surge of colder air. Although most of the evening will remain rather warm by late October standards, by morning the air should have cooled into the teens and lower 20s around the Pikes Peak Region with upper 20s to lower 30s likely for most areas along and south of the Arkansas River. Should the fog be thick enough then some minor icing of roadways could occur with elevated surfaces particularly susceptible. Snow should begin to fall over the mountains of northern Colorado bringing welcome help to everyone working to contain the wildfires.

Sunday: Mostly cloudy, windy and cold with areas of snow developing over southern Colorado. Currently it appears that the snow will have a "banded structure" with localized areas intermittently receiving snow that may fall hard enough to accumulate a couple of inches over the relatively short period of time. The air will be cold enough for even light accumulations of snow to potentially whiten area roadways and lead to slick travel. The most likely area in southern Colorado to receive sustained, widespread, and potentially heavier accumulating snow looks to be near the Wet & Sangre De Cristo Mountains Sunday afternoon into early Monday morning.

Extended: Areas of generally light accumulating snow are most likely to continue into Monday over the southern parts of our viewing area. Most areas will just remain cloudy and very cold with some flurries and high temperatures only in the 20s. We expect the sky to clear and the air to warm gradually Tuesday & Wednesday, then possibly cool a little on Thursday before spiking up even more by the end of the week. 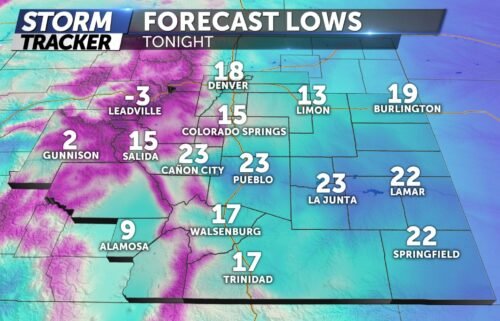 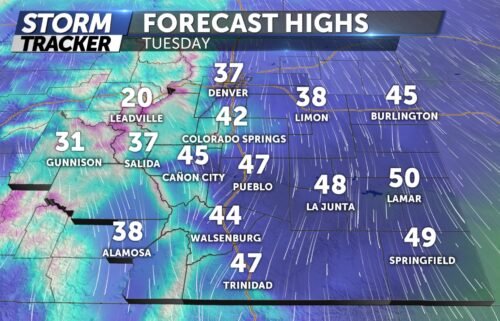