Overview:  We’re tracking a warm, windy start to the weekend followed by a much cooler finish for some!

Today:  Partly cloudy, windy, and warm with conditions becoming favorable for the spread of wildfires over much of southern Colorado during the day. High temperatures will reach the 70s and 80s for the plains with 60s and 70s for our local mountain communities and southern valleys.

Tonight:  Partly cloudy with a gusty westerly wind early, then a gusty, and colder north/northeasterly wind after midnight. By morning, a blanket of low clouds will likely be developing over the plains of eastern Colorado. Colder with low temperatures in the 30s to lower 40s for most areas, but the high mountain valleys will cool into the 20s.

Sunday:  Low clouds are likely to hang on over low lying areas of eastern Colorado through much of the morning while the communities on the mountains may see the sun right away. The shallow layer of colder air responsible for the low clouds will keep temperatures over a large area of the plains considerably cooler than Saturday with temperatures hovering in the 40s and 50s for much of the day, and although a few areas on the higher terrain along I-25 may warm up a bit more, that isn’t likely to happen until the afternoon. The cooling should not be as significant over the mountains and mountain valleys where high temperatures will reach the 50s and 60s.

Extended:  The start of the workweek should be warmer again for those areas in eastern Colorado that were significantly cooler on Sunday.  The first half of the week looks warm considering the time of year with temperatures generally in the 60s and 70s. Many areas should expect breezy conditions during the afternoon hours next week, but fire weather does not look to be as prevalent as it was last week. There are indications that another shallow layer of colder air could slide over the plains of eastern Colorado sometime Thursday or Friday. 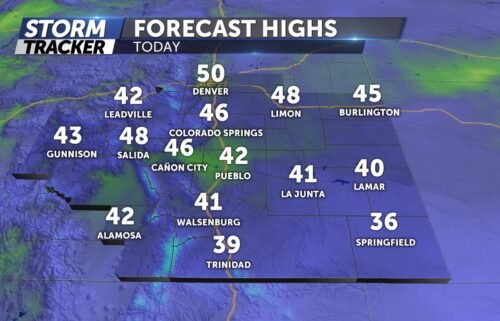