Multiple car crashes this morning being reported, most likely due to the snow-covered and slick roads. Last night a quick-moving snowstorm dropped less than an inch of snow in Colorado Springs, with up to 2" in Monument. It's not the accumulation that's causing the issues, mist was also reported on surface sensors at the AFA and COS airport. The liquid precipitation froze to the roads overnight, so a thin layer of ice was present under the dusting of snow. No additional precipitation is in the forecast for this afternoon or weekend ahead.

Temperatures warming into the high 40s today in El Paso County with plenty of sunshine. Melting snow will make for wet roads throughout the day.

The warming trend continues into the weekend forecast with afternoon sunshine both Saturday and Sunday. Sunday temperatures will be approaching record highs, closing in on 70 in Colorado Springs and 76 in Pueblo. For early February, just wow.

All good things must come to an end eventually, as is the case for the warm weather. A strong cold front will move in early Monday morning. Dropping temperatures significantly and bringing moderate to heavy snowfall to the Pikes Peak region. The Monday evening commute will be something to keep an eye on for winter driving conditions. 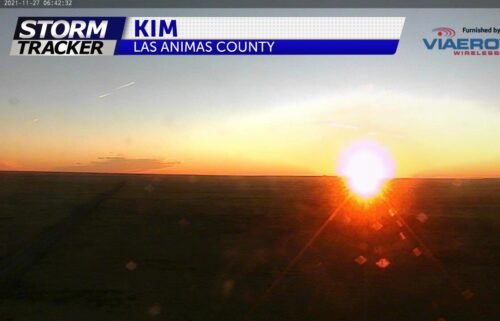