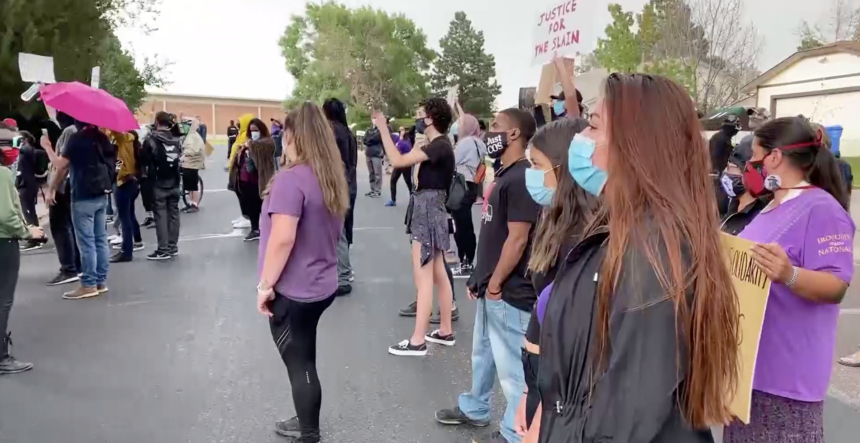 COLORADO SPRINGS, Colo. (KRDO) -- On the one year anniversary of DeVon Bailey's death, more than 50 protestors marched to the home of one of the Colorado Springs police officers involved in the shooting. They were calling for him to be fired.

On Tuesday, KRDO heard from neighbors who witnessed it all and quickly found themselves involved, even if they did not want to be.

One neighbor, Bobby Cox, said “It was supposed to be a peaceful march and it seemed to be peaceful.”

While Dion Elmore, another neighbor, added, “Yeah, they kept to the street and they kept peaceful. I mean they did what they came there to do, they got their point across.”

In what is normally a quiet neighborhood here on Pulpit Rock Drive quickly transformed into people marching and chanting demanding justice for the death of De'Von Bailey. Bobby Cox, who lives on this road said he and his wife were warned in advance but were still nervous not knowing what could happen.

So to prepare, Cox says he and his wife secured their home as best as they could and stayed inside.

Cox said, “Flower pots, and things out. If something was loose they might pick up, you never know but they never came in the yard or anything like that.”

As for Dion Elmore who also lives in the area, he said he 100% supports the right for peaceful assembly, however, there were a few moments that made him nervous.

Ultimately, both Cox and Elmore were pleased to say that the people protesting respected their property and mostly kept in the street.

We also reached out to CSPD to see if any arrests were made last night and they said none have been made at this time. We will be sure to keep you updated.

Watch a replay of the protest below. Warning: Explicit language is present: