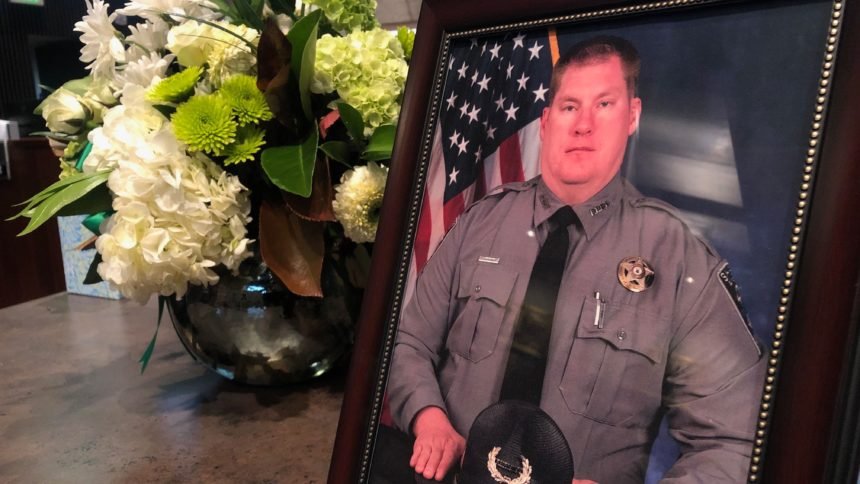 COLORADO SPRINGS, Colo. (KRDO) -- The El Paso County Sheriff's Office confirmed to KRDO that one of its deputies has died from complications due to COVID-19.

The Sheriff's Office identified the deputy as Jeff Hopkins, 41. A news conference was held early Thursday afternoon. Watch below:

Sheriff Bill Elder said that Hopkins' most recent assignment was as an intake and release deputy in the El Paso County jail.

Elder confirmed to KRDO NewsRadio Thursday morning that at least eight deputies are suspected to have the coronavirus -- including Hopkins -- which has infected thousands across Colorado.

Whether those patients contracted the virus while at work, or while away from work, remains unclear.

"We will conduct a difficult, time-consuming investigation to determine potential sources of exposure and identify individuals who may have been exposed," said Susan Whelan, director of the county health department. "Once we identify others at risk, we'll contact them. For every person we interview, we identify, on average, 10 additional contacts."

An autopsy still must to be performed and it's not known if Hopkins had any pre-existing medical issues.

Johnson said Hopkins' symptoms began 7 to 10 days ago. He was tested for COVID-19 on Tuesday, but his test results didn't come back until Thursday morning after he passed.

It is with profound sadness we announce Deputy Jeff Hopkins while off duty, passed away on April 1 from the COVID-19 virus. Deputy Hopkins was 41 years old and leaves behind his wife, Wendy. Deputy Hopkins has been employed with the Sheriff’s Office since 2001. #NeverForgotten pic.twitter.com/JhNbhdyXiA

Hopkins has been employed with the Sheriff's Office since 2001, holding multiple positions during his law enforcement career.

His most recent position put him in contact with dozens of people, including inmates, every day.

Elder said there are about 40 deputies and about 25-30 civilians who work in intake and release.

Hopkins had recently taken some time off, Elder said.

"We would expect that we would have some contact. He had not worked a lot of days in the interim period and especially over the last couple of weeks. He had taken some time off which has limited some of that exposure," said Elder.

The Sheriff's Office said it is taking extra precautions in trying to limit the spread of the virus to more deputies.

"It's come to the point now where everybody that comes into one of our buildings, we take their temperature and ask them strategic questions to try and stop the spread of this virus to avoid discussions like this." the sheriff said.

Elder said he thought his office was doing everything it could to limit the spread of the virus there, such as additional cleaning and disinfecting of buildings and patrol vehicles, using gloves on computer keyboards and eliminating daily face-to-face briefings.

"This death is a reminder (that) even the best plans sometimes have challenges when we're facing something like this," said Dr. Leon Kelly, the county coroner and deputy medical director for the health department.

"It's also a stark reminder that we must be as resilient and persistent as the virus," he said.

Officials also will investigate how Hopkins felt just before his death.

"Typically, the course of this disease has shown some waxing and waning," Johnson said. "You feel better at one point and worse at another point. That's why it's important to continue social distancing to avoid exposing others, and to call your doctor if your symptoms become more serious."

Of the eight sheriff's employees who have tested positive, Elder said several are recovering.

As for jail inmates, officials said they are prepared to create a separate isolation wing for anyone who is infected or exposed to the virus. One inmate already is in isolation after reporting flu-like symptoms and likely will be tested for the virus.