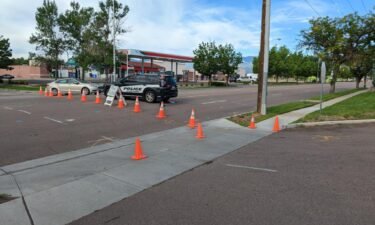 YODER, Colo. (KRDO) -- A body was found in the ruins of a house destroyed in a fire following a lengthy shootout with El Paso County Sheriff's deputies.

Thursday at 5:33 p.m., two EPCSO deputies responded to a home south of Yoder near the intersection of Bonne Rd. and Truckton Rd. to contact a man wanted for questioning.

According to a press release from the Colorado Springs Police Department, the suspect violated an existing protection order involving a former significant other. Police say the man fled from Fountain police officers at a traffic stop on Wednesday.

Following that incident, CSPD says a warrant charging the suspect with several crimes, including domestic violence-related Menacing, Harassment, and Violation of Protection Order was issued.

Shortly after deputies arrived at the scene Thursday evening, the situation escalated.

"The attempts went unanswered, but while on-scene, the deputies heard noises from within the residence, leading them to believe the home was occupied," a statement from CSPD said. "The deputies attempted to engage the suspect by calling out his name. In response, an individual inside the residence fired one round through the front of the home, narrowly missing the deputies."

CSPD says someone inside the house indiscriminately fired shots out of the home, requiring deputies to
evacuate the only neighbor near the location and call in the SWAT team.

While shots were being fired from the house, two deputies from the Sheriff's Office SWAT team engaged the shooter by firing at least one round toward them.

As the engagement continued, Colorado Springs police say the residence became engulfed in flames, requiring a
response from the Yoder Fire Department.

After the shots stopped, firefighters put out the flames and one deceased individual was found inside the property. It's unclear if the deceased is the suspect deputies originally went to contact.

Police have yet to say if the deceased was struck by shots fired by deputies.

Neighbors on the 6200 block of Boone Road tell 13 Investigates they heard dozens of rounds of gunfire for around an hour before the fire broke out.

“It sounded like a war zone I can’t lie," said Star Alfieri who lives two doors down from where the shooting occurred. “Rapid gunfire, it was traumatic, to say the least. I did hit the floor. I would just hear pop pop pop.”

Alfieri was not evacuated from her property, but she said the Sheriff's Office called her home telling her to lock her doors and windows when the shooting began.

Per state law, the Colorado Springs Police Department is leading the officer-involved shooting.